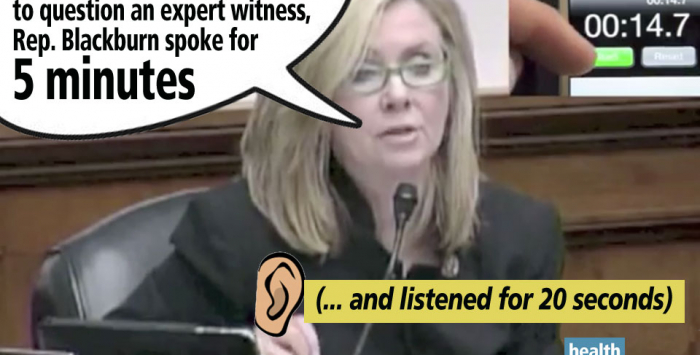 A twist of logic

Fact 1: For a long time, health insurance companies have been hiking the premiums they charge small business each and every year.

Fact 2: In many cases, increases have been in the double digits, especially after a worker or dependent has been treated for a serious illness or injury.

Fact 3: Because of those unrelenting increases, according to The Wall Street Journal, by 2008, the last year of the George W. Bush administration, far fewer than half of America’s small businesses were still offering coverage to their workers.

Fact 4: Even though Obamacare was passed three years ago, insurance companies continue to increase premiums they charge small businesses, and those increases are still often in the double digits.

Fact 5: Insurance companies can continue to demand exorbitant rate increases in many states because their lobbyists were able to convince members of Congress to strip out of Obamacare a provision that would have given federal and state regulators the ability to reject unreasonable rate increases.

Logical conclusion: It’s all because of Obamacare that small businesses are getting hit with double-digit premium increases this year.

You betcha. And, regrettably, I can report firsthand that twisted logic appears to be pervasive in our nation’s capital.

:20 of testimony was all lawmaker wanted

Because of my two decades of experience in the health insurance industry, I was invited to testify at a Congressional hearing earlier this month on the impact of Obamacare on the affordability of coverage.

Among the members of Congress at the March 15 hearing of the House Energy & Commerce Subcommittee on Health was Rep. Marsha Blackburn from my home state of Tennessee. Members have five minutes each to ask questions of the witnesses. As the video of the hearing shows, instead of allowing me to explain how common industry practices contribute to the dwindling number of small businesses being able to offer coverage, Rep. Blackburn gave me only one-third of one minute to talk when it was her turn to ask questions.

Rather than asking me to share my knowledge of industry practices that have led to steep year-after-year premium increases for thousands of employers, Rep. Blackburn instead used most of her time to read a list of business owners in her district she said had written to her complaining of recent rate increases she maintained were caused by Obamacare.

“What do you have to say to those businesses?” she asked me. When I began to respond, she cut me off mid-sentence. Apparently, she was not happy I began to describe the tragic situation of Leslie Elder. After she was diagnosed with breast cancer, her husband, a small business owner, had to drop coverage for all of his employees and dependents because his insurance carrier raised his premium so high.

As Rep. Blackburn was reading the list, I couldn’t help but think that some, if not most, of the people who had written her had deliberately – and erroneously – been led to believe that their premiums increased this year solely because of Obamacare. After all, it is in the best interests of the insurance industry for people to believe that. You see, they recently launched a huge effort to get lawmakers and regulators to gut some of the most important consumer protections in Obamacare. These businesses believing Obamacare is the cause of their premium increases is an indication of the industry’s power to manipulate public opinion..

In fact, one of the real objectives of the “Time for Affordability” PR and advertising campaign the insurance industry is waging is to obscure a reality they want us and our lawmakers to ignore or forget. Insurance premiums have become unaffordable not because of health care reform but because insurers have been able to get away with raising rates as high as necessary to meet profits expected by board members, shareholders and Wall Street financial analysts.

As I told the subcommittee members in my opening remarks, the average family premium increased 131 percent between 1999 and 2009, far faster than both wages and inflation.

“My former colleagues in the insurance industry are hoping you’ll either have amnesia or turn a blind eye to the fact that premiums truly were skyrocketing before the Affordable Care Act slowed them down,” I testified.

If Rep. Blackburn had given me more than 20 seconds, I would have offered to help her investigate whether or not Obamacare was the reason for the rate increases in her district.

I still want to help her do that – so much so that I decided to put my offer in writing. I proposed in a letter to Rep. Blackburn shortly after the hearing that she and I reach out to the business owners who had contacted her and ask a few questions. Such as:

It would also be interesting to learn if Rep. Blackburn or anyone else has told the small business owners that they might qualify for tax credits – made available through Obamacare – if they offer coverage to their employees. Thousands of employers are now paying less for coverage, and many others are offering health insurance for the first time, thanks to those Obamacare tax credits.

I got a confirmation Monday evening from an aide to Rep. Blackburn that my letter had been received. I hope she will take me up on the offer. I’ll keep you posted.