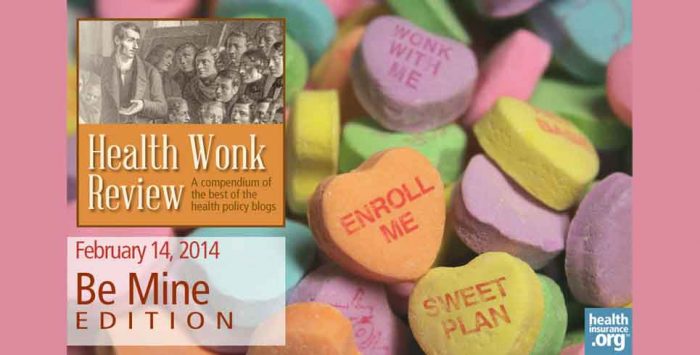 How do we love health wonkery? It’s our week to host Health Wonk Review – and it’s the annual Valentine’s Day edition – so it’s perfect opportunity ooleor us to count the ways and “show the love” to the health wonks out there who lovingly craft hard-hitting health care analysis week after week.

If you’re one of healthinsurance.org’s regular readers, you know there’s a huge sweet spot in our hearts for anything that has to do with health reform – so we’ll start by delivering a “XXOO” to the writers who keep their finger on the heartbeat of the health reform law.

Joe Paduda at Managed Care Matters didn’t have a love note for GOP lawmakers Burr, Coburn and Hatch and their not-better-late-than-never legislative alternative to that thing that is already law. An analysis of the GOP alternative to PPACA, Paduda writes, indicates that “a) it’s too bad they didn’t offer this when it mattered; b) it’s really bad politically as it raises taxes on the middle class; c) it doesn’t do anything to address costs; and d) it would require the entire health care industry to turn the clock back.”

Louise Norris, writing for our own blog, had no affection for a highly publicized claim that the Affordable Care Act made a “victim” of lupus sufferer and State of the Union guest Emilie Lamb. U.S. Rep. Marsha Blackburn (R-Tenn.) and Lamb both claimed that the ACA had intruded on Lamb’s life by stealing coverage she considered “stellar.” But, as Norris explains in A health disaster waiting to happen, that “stellar” limited-benefit coverage could have easily destroyed Lamb financially.

Brad Wright at Wright on Health and Norris (writing at Colorado Health Insurance Insider) both looked at the recent controversy over a Congressional Budget Office report – and both shot arrows (though not from Cupid’s quiver) at those who trumpeted the report as evidence that the ACA is a “job killer.”

In ObamaCare and Jobs, Wright points out that that’s not actually what the report says at all. In fact, he writes, the reduction in the workforce that CBO documents could actually be a good thing, depending on the reasons behind it.

In her post – It’s Not Just About Supply And Demand For Labor – The ACA Makes Life Better, Increases Choices – Norris also takes the “job killer” crowd to task:

Republican lawmakers have mostly backed off of the argument that the ACA will kill jobs, and have instead latched on to the horrors of people choosing to work less. There is no doubt in my mind that both sides are picking the parts of the CBO report they like, ignoring the parts they don’t like, and assuming that Elmendorf’s acknowledgement that “our estimates are always uncertain” is the magic wand they need to create the picture they want voters to believe.

Hot and cold on technology

She might not be “in love” with progress on a shift to electronic patient records, but Peggy Salvatore at Healthcare Talent Transformation writes in Change Now or Wait for Natural Evolution that “… we are getting closer everyday.”

Salvatore tells us that she was inspired to re-post her piece from 3½ years ago in response to an article last week that “discusses the uptake of nearly-free, cloud-based EMR and the advantages of the latest, greatest technology that is virtually seamless in its utilization in the clinical setting.”

In her post, Salvatore notes that it’s “more than likely – almost certain – that over time we will achieve full uptake, integration and interoperability of electronic patient records, and all the efficiencies that other industries have already realized.” The only question, she says, is whether “we push through the change now – at the massive cost and effort involved in the push – or we wait for the natural evolutionary pull to occur.”

Meanwhile, over at John Goodman’s Health Policy Blog, NCPA Senior Fellow Greg Scandlen was definitely cool to the conclusions of a Health Affairs article about the impacts of adopting health information technology (HIT). In HIT Apologia, Scandlen outlines the problems he sees with adopting HIT.

Our favorite unminced words from the post? “It doesn’t take long ― like just the abstract ― to figure out that people haven’t learned a blessed thing from flushing $20 billion down the toilet.”

Young and in love with coverage?

Over at the Health Affairs Blog, Marc Berk and Zhengyi Fang of Social and Scientific Systems look deep into the hearts of the young and uninsured. In Who Are The Young Uninsured,” they examine the characteristics of the young uninsured using data from the Medical Expenditure Panel Survey (MEPS) conducted by the Agency for Healthcare Research and Quality.

Their analysis sheds light on the challenges involved in persuading this population to sign up for the ACA’s Marketplaces. “While the ACA will allow many to obtain needed coverage,” they write, “our analysis does suggest why it is not proving to be an easy sell.”

David E. Williams at Health Business Blog explains how 23andMe ― purveyor of personal genetic testing kits ― could break subscribers’ hearts (or worse.) In How 23andMe got into trouble, Williams explains how 23andMe has basic errors in its approach to gene analysis, which can lead to scary experiences for its customers who are led to believe they may die. No wonder they are getting themselves into trouble, Williams says.

In Cancer Tidal Wave, Jason Shafrin at the Healthcare Economist has “good news and bad news.” The good news is that decreased mortality rates for some diseases means people are living longer. The bad news? When we’re dying older, it’s from other diseases ― like cancer. And that, he says, explains why The World Health Organization is predicting a tidal wave of cancer cases in the coming decades.

Julie Ferguson at Workers’ Comp Insider reports that unfortunately, love is not the only plentiful mind-altering substance in the air. In Opioids: the Gateway to Heroin, Ferguson reports that with the explosion of addiction to prescription drugs and the cost of heroin less than that of prescription drugs, the outcome is predictable. The new public health reality: opioids as the gateway to heroin.

In Open Wide … Take 2, Henry Stern at InsureBlog takes another look at the ACA’s Pediatric Dental essential health benefit. In “Take 2,” Stern drills ― if you will ― into one reader’s assertion that carriers could use a loophole in the law to avoid including the coverage in most states. Spoiler: Stern isn’t buying the argument.

Bradley Flansbaum at The Hospitalist Leader says we should be concerned about the “two-midnight rule: In  CMS, SHM and the Two-Midnight Rule, he reports that difficulty in adapting the rule rages on. And the implications far reaching: “Patients staying in hospitals less than two midnights do not become inpatients. The bills and how the hospital manages their care will have ripple effects. Our attempts at reconciling the rule and how the directive impacts all parties follows.”

In Who Knew? … Judge Finds that Hospital Takeover of Medical Practices Raised Prices, Roy M. Poses at Health Care Renewal walks readers through the story of an Idaho hospital system’s acquisition of the state’s largest independent doctor’s group ― and the anti-trust case that ensued. Poses explains how the legal decision in the case cited evidence that hospital leadership were aware of the deal’s inflationary effect on health care prices, implying that more revenue ― not high-minded talk of improving quality of care ― was the primary reason for the takeover.

Among Poses’ conclusions: “In health care, many people seem to have fallen for the monopolists’ old pitch that concentration of economic power will increase “efficiency,” forgetting that such efficiency historically mainly benefits leaders of market dominant organizations, not the public.”

Next up: A less love-centric version of Health Wonk Review returns on February 27, hosted by David Harlow at the HealthBlawg.