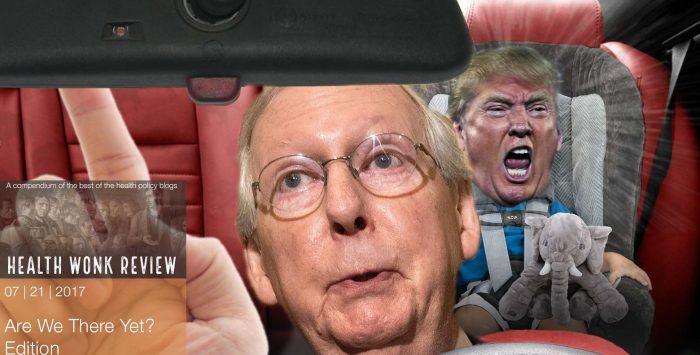 It’s summer, and nothing says summer like a seemingly unending roadtrip with family – a journey always made to seem that much longer and unbearable by that one kid in the backseat asking “Are we there yet?” every 15 minutes.

Right now, Congressional Republicans are in the front seat, and careening back and forth across the political landscape as they try to lock in on reliable GPS coordinates for repeal of the ACA. In the backseat? Some red-faced and whiny character who just can’t fathom why this trip is taking so long.

We’d love to think this trip is almost over – as has been suggested by media from (Chris Christie-inhabited) shore to shore. Given all of the “It’s finally over” declarations from media, I would have been a bit hesitant to plug some of this week’s Health Wonk Review contributions.

But since Mitch McConnell appears unwilling or unable to put the Repealmobile in PARK, I expect we can still get some mileage out of commentary on the legislation and GOP efforts to make it work.

So let’s get this show on the road.

Is this endless journey the fault of the Republicans at the wheel? Over at Health Business Blog, David Williams weighs in on a Fred Barnes-penned Wall Street Journal op-ed saying the failure to repeal is due lack of teamwork.

In Sorry Fred. It will take more than teamwork to fix GOP healthcare dysfunction, Williams explains that the GOP’s shortcomings are more fundamental. He lists five reasons for the disarray and concludes, “Congressional Republicans should hit the reset button.”

ACA enrollment guru and health system critic Charles Gaba is not at all pleased about where the Republicans – including President Trump – have been promising to take the healthcare system. But equally disturbing, Gaba says, is the impact Republicans are already having on coverage and premiums.

In his post at ACASignups.net, Gaba explains how the “Trump/GOP Sabotage Effect” is driving up premiums in 20 states, including his home state of Michigan. Trump, Ryan, McConnell & Price will owe my family $2,000 next year. Pay up, jerkweeds. Title pretty much says it all, I think. But read for yourself.

Health system number cruncher extraordinaire David Anderson looks at GOP proposals that would put us on the road to block grants for Medicaid. In his Balloon Juice post, Block grants and breathing, Anderson explains how block grants would play out over time for individuals who have cystic fibrosis – and for the entities that treat these patients. Spoiler: Not awesome.

Look out for those higher costs!

Yikes. American patients would be on a collision course with eroded benefits and higher out-of-pocket costs if the Senate’s BCRA bill – or some version that conceivably might survive the current battle – makes it into law, according to Louise Norris.

In How Would the BCRA Impact Deductibles and Out-of-Pocket Costs? Norris has a great explainer about exactly why the Better Care Reconciliation Act will result in “dramatically higher-out-of pocket costs” while allowing state waivers that would erode benefits. Great read.

We don’t need anyone else putting the pedal to the medal as the Republicans speed us toward a collision with God knows what – and Andrew Sprung makes that case in a July 14 op-ed at NJSpotlight.

In Frelinghusen moves to destabilize ACA Marketplace, Sprung explains how U.S. Rep Rodney Frelinghuysen isn’t “merely riding the uninsurance train” (and by train, I’m sure he’s talking about the car I keep referring to). “As chair of the House Committee on Appropriations, he is green-lighting sabotage of the existing individual market for health insurance,” Sprung reports.

‘Siri, can we just start over?’

You wouldn’t have any trouble convincing Harold Pollack that it’s time to recheck the compass on this trip. In New Senate draft leaves its five fatal flaws intact Harold explains that while Senate Republicans had promised to detour from their Better Care Reconciliation Act road map, they mostly stayed right on course.

“After one false start, Republicans needed to go back and improve their bill. So they addressed the one embarrassing flaw, and left the five fatal ones intact,” Pollack writes at the healthinsurance.org Blog.

Do we need more ‘cops’ on the road?

Roy Poses, over at Health Care Renewal says there’s one thing that would clearly improve the nation’s healthcare journey – and that’s more policing of the misbehavior of large U.S. healthcare organizations.

“We have an even longer way to go to control US health care corruption, much less reduce overall health care dysfunction.”

‘Siri, please don’t drive us through the UK.’

Another take on our nation’s healthcare journey? That the healthcare grass may not be greener over the pond. In A Tale of Two Health Systems, Kelley Beloff, a medical office manager, offers her insights about two healthcare systems, and two very different outcomes.

“Into these countries came two sick little boys that highlighted the successes and failures, the winners and losers, in Medicine today,” Beloff notes in her post for InsureBlog.

Hold the phones. Apparently, summer is not only about unending political roadtrips. Julie Ferguson, writing at Workers Comp Insider, says summertime is a perfect time for a reminder of the high hazards the nation’s farmworkers face to bring us fresh food.

David Harlow at HealthBlawg says healthcare organizations must practice better data hygiene. In Keep it Clean: Ransomware and David Harlow in the Press, he notes:

“We know what we need to do; we just need to do it. Culture change at the top of the organization, plus resources, yielded significant improvements on the HAI [healthcare-associated infections] front. We should do the same on the cybersecurity front as well.”

On the road again

Our next edition of Health Wonk Review will hit the road on August 17, when Peggy Salvatore takes the wheel over at Health System Ed Blog.

Until then, buckle up.