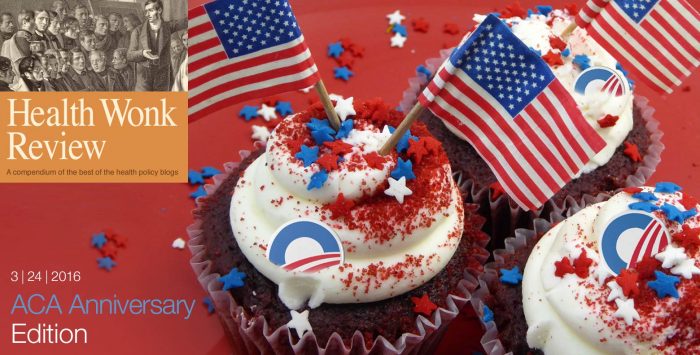 The latest, greatest edition of Health Wonk Review – and the first ever hosted by Charles Gaba – is over at acasignups.net. Charles actually had one of the larger collections of posts in recent memory – with 14 to review.

(Our thanks to Charles for including our post by Louise Norris, who had a really nice overview of the Affordable Care Act’s impact on health coverage and cancer treatment.)

Charles dubbed this edition the ACA Anniversary Edition – and there is some Obamacare-ish stuff in there: a piece on narrow networks, a post about why we should eliminated balance billing at in-network hospitals and another post with a really compelling title, Four Key Issues in Health Law that are as Relevant as Ever in 2016 over at Health Affairs.

But I’ve gotta say, for an ACA Anniversary edition, this round-up covered a whole lot of other non-reform issues: a post about a new assisted suicide law in California, a discussion of how healthcare providers struggle with violence-related risk management, and the most enticing title for a blog post I’ve seen in awhile – from Peggy Salvatore – The Healthcare Industry: World’s Largest Hairball?

Short story: you definitely don’t want to miss this edition.

See you next time – when Jan Sidorov hosts HWR at The Population Health Blog on April 7.