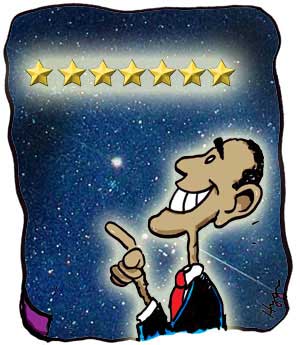 President Obama has a lot on his plate. If you hadn’t already sensed the magnitude of the challenges he’s facing, the POTUS (President of the United States) spelled them out last night in his 100th-day press conference.

Between bailing out the auto industry, fighting wars in Iraq and Afghanistan, keeping an eye on North Korea and Iran, “figuring out how to deal with energy independence,” and now, facing the threat of pandemic flu, this President has more challenges facing him than any other in recent history.

And then there is health care reform, a prize eyed by many a previous chief executive officer but which has stayed tantalizingly out-of-reach. But Obama may be just the POTUS with the needed stretch to get it, as the stars seem to be aligning in a way that could finally get the ball rolling on meaningful health reform.

What stars, you ask?

First star? The swine flu. That’s right. The threat of the swine flu global pandemic was enough to convince Congress that they could not – should not – continue to hold up the appointment of Katherine Sebelius as Secretary of Health and Human Services.

2. Sebelius herself. The Kansas Governor not only arrives in the nick of time to tackle swine flu; the seasoned politician now becomes the public face of Obama’s health care agenda. We like her credentials and have high hopes that she’ll be a powerhouse teamed up with Nancy-Ann DeParle, director of the White House Office of Health Reform.

3. Arlen Specter. Senator Specter’s surprise defection to the Democratic party today changes everything in Congress. With the addition of Specter and the expected swearing in of Minnesota’s Al Franken, the Democrats will have the 60 votes in the Senate  – enough to block a Republican filibuster over health reform.

5. The economy. With rising unemployment and an accompanying rise in the number of Americans who are losing their health insurance – approximately 50 million Americans are now uninsured – the nation is facing a health care crisis that portends catastrophe for a huge segment of the population, and for the American economy.

6. Advocacy groups. The health care threat has not gone unnoticed by citizens, who are organizing in state, regional and national advocacy groups to push for state and national reforms. The proposals are numerous: for a public plan, a single-payer system, universal health care. Get ready for a grassroots movement of epic proportions.

7. Industry support. The insurance industry knows that this administration, this Congress, and the nation’s uninsured are chomping at the bit for health reform, and the industry has pledged to support reform. America’s Health Insurance Plans (AHIP), has pledged to cease the practice of charging higher premiums to customers with pre-existing conditions IF the government mandates the purchase of coverage by all Americans.

The eighth – and brightest – star? President Obama. He believes that this health care crisis is a threat to the economy, and he’s pledging to move forward in a spirit of bi-partisanship. This DESPITE the fact that Democrats now appear to have the power to force health reform through Congress and into law. We believe the President is serious, and we admire this spirit of cooperation.

At the same time, we believe that making health reform one of the first orders of business will help heal the economy faster and, just as importantly, help heal the soul of a nation that’s looking anxiously forward to economic stability.