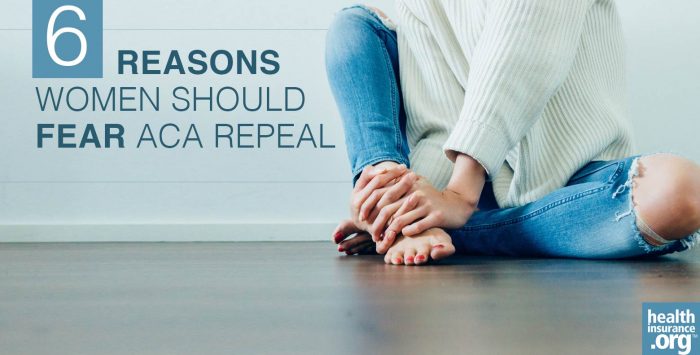 As an independent journalist, I’ve long bought health insurance on the private market. And, I remember the days before the Affordable Care Act became law.

In 2006, I applied for coverage with a local insurer after my family and I moved to a new city. I had no medical conditions and took no medications. But I did deliver my son three years earlier via C-section, a procedure that costs about 50 percent more than vaginal births. If I’d had another child, research showed my chance of needing another C-section to be about 90 percent.

In an age of medical underwriting, that counted as a pre-existing condition, and one for which I was charged a higher premium – despite the fact that I had no intention of having another child and that the plan I was purchasing didn’t cover maternity services anyhow.

That’s just one example of what life was like for women like me who ran their own businesses or for other reasons didn’t have access to work-based health insurance before the Affordable Care Act became law.

House Republicans, who have promised to repeal the ACA for years, have released their Obamacare replacement plan. The bill, called the American Health Care Act, maintains a number of the ACA’s provisions but dramatically changes others.

Women have gained a lot under the ACA, and now stand to lose a lot too. Here’s a rundown of the benefits that the bill threatens to do away and a few important provisions that – at least for now – are not in the crosshairs.

What the GOP bill would eliminate

Two very important benefits for women – particularly those with low incomes – would be nixed if the draft legislation becomes law.

The ACA expanded Medicaid and that extended insurance coverage to approximately 11 million low-income Americans. The GOP bill would repeal the expansion as of January 1, 2020, except for people enrolled as of December 31, 2019 who don’t have a break in eligibility of more than one month.

According to Alina Salganicoff, vice president and director of women’s health policy with the Kaiser Family Foundation, prior to the ACA, many women who qualified for Medicaid while they were pregnant lost that coverage after delivering their child. Under the ACA, women living in states that expanded the program were able to maintain insurance for themselves and their children – coverage that is now under threat.

In addition, the bill would make fundamental changes to federal Medicaid funding and limit the program’s growth beginning in 2020. This represents a major restructuring of the Medicaid program in ways that reduce federal funding over time and that are likely to cause millions to lose their health insurance.

2. Planned Parenthood and restrictions on abortion

According to Salganicoff, losing Planned Parenthood funding and the option for Medicaid to keep those clinics in its provider network will be especially problematic for some women in rural areas who don’t have a wide range of providers available to them. “It will affect their access to contraceptive services,” she says.

In addition, the bill wouldn’t let consumers use available tax credits to buy a health plan from an insurer that covers abortion services.

ACA provisions that are still standing – for now

The GOP bill keeps a number of the ACA’s provisions in place. But it’s worth noting that much of the law, such as the requirement that insurers cover 10 essential health benefits, was implemented through regulation.

That means that while these provisions can’t be eliminated through the reconciliation process the GOP is using to repeal the ACA (which only allows them to nix items that directly impact the budget), the Trump administration can still work to dismantle them through administrative action. And, given that previous Republican proposals to replace the ACA eliminated many of these benefits, it’s likely future legislation will seek to do just that.

The provisions that most directly affect women that are still in place include:

It used to be that pregnancy, C-section deliveries, a history of domestic violence, or problems with depression could be deemed by insurers as pre-existing conditions. That often led to restrictions on coverage, higher premiums or in some cases, outright rejection.

The ACA requires all new health plans to cover preventive services, including a number specifically for women, at no additional cost. This provision of the law expanded access to preventive care for an estimated 71 million Americans.

Well-women visits, pap tests, mammograms, bone-density tests, breastfeeding support and supplies, screening for domestic violence and the HPV vaccine, among a list of additional services, are available at no cost.

In addition, most women with insurance now have access to all FDA-approved contraception with no co-pay, deductible or co-insurance.

About 20 percent of women of childbearing age who had insurance through a large employer spent some of their own money on birth control pills prior to the ACA becoming law. Today, that number is less than 4 percent.

Before the ACA, women between the ages of 25 and 40 were charged about 30 percent more than men of the same age. Much of the reason for that stemmed from the high cost of maternity care — a benefit that only about 12 percent of plans included.

The requirement that all ACA-compliant health plans cover maternity services has been a major sticking point for Republicans and many Americans who resent having to pay for a service they say they’ll never use. During this week’s marathon House Energy and Commerce Committee debate about the GOP’s replacement bill, for example, one representative asked why men should pay for prenatal coverage.

It’s estimated that adding maternity care coverage across the broader population adds only a few percentage points to the cost of insurance premiums. But by spreading the risk, this benefit caused insurance rates for young men – who paid nothing toward maternity services in the private market prior to the ACA – to increase by about 50 percent, while women of the same age saw their premiums drop by about the same amount.

The ACA required new plans to allow women to get care from an obstetrician-gynecologist without having to first get a referral from a primary care physician.

Many states allowed women this freedom before the ACA became law, though insurance provided by large employers often did not. The ACA made that a requirement for all new health plans, including those offered on the job, making it easier for women to gain access to reproductive health care and other common health screenings.

Lisa Zamosky is a nationally known expert on health insurance, healthcare policy, the Affordable Care Act and consumer health and finance concerns. She has written for Money Magazine, is a former health care business columnist for the Los Angeles Times, and health insurance/reform expert and blogger with WebMD. Lisa was also a correspondent of the California Healthcare Foundation. Her work has appeared in U.S. News & World Report, Reuters, MSNBC.com, Health.com, Kaiser Health News, in the Chicago Tribune, Baltimore Sun, NBC.com, among other publications.