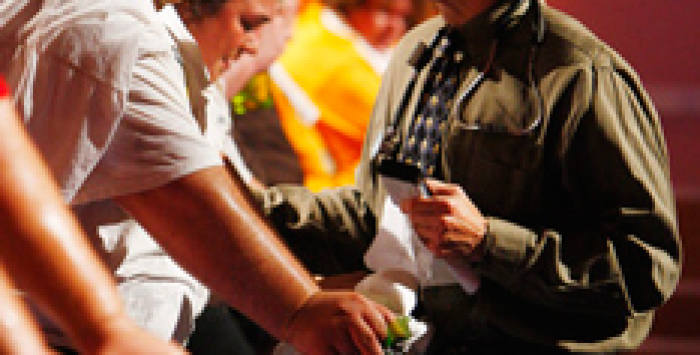 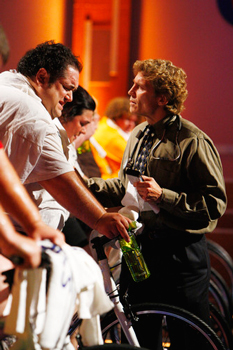 Dr. “H” Rob Huizenga of “The Biggest Loser” knows that education equals motivation for folks who need to change unhealthy behavior. The individual mandate could do the same: getting more folks back to doctors for the treatment – and education – that they need. (Photo courtesy of NBCUniversal)

In a New York Times blog post today, columnist Pauline W. Chen raised a really great question: How do you get patients to take charge of their own health?

The post starts with the story of 50-year-old man whose obesity in youth contributed to diabetes in his 30s, then high blood pressure. And eventually, Chen writes:

“By the time he was in his 40s, he had become so debilitated by a heart attack, congestive heart failure, peripheral vascular disease, arthritic joint pains and his ever-increasing weight that he could no longer work.”

Blogger Pauline W. Chen, M.D., a surgeon and author, then quotes a colleague, who comments on the patient:

“I hate to say it, but I feel like he’s done this to himself,” he said. He said the patient seemed to ignore all medical advice and had no interest in learning about his diseases. “If he were even a little bit interested in his own care, he wouldn’t be where he is.”

My question to the doctor would be, “Did this man’s doctors try to make him interested?”

Relax. I’m not here to slam doctors for not doing enough for their patients. I’m just curious: How can we make the American patient care more about his or her health?

A lesson from Dr. H.

And I’d say the answer is education. Consider the popular NBC television series, The Biggest Loser.

Admittedly, there is plenty that’s ridiculous about the show – including the fact that they have huge people sometimes carrying other huge people around the gym on their backs, straining joints that already are horribly overburdened. But in addition to the over-the-top drama and conspicuous product placement, there’s some real education going on.

In perhaps the best segment in each series, Dr. Rob Huizenga meets with competitors to show them in dramatic fashion what they’re doing to themselves through destructive behaviors. He pulls up their fat percentage, talks about the plaque that’s building on their arteries, informs them that they’ve already become pre-diabetic. And then he gives them their real biological age and a life expectancy. Tears flow.

His approach is a “scared skinny” take on Scared Straight, the Academy Award-winning 1970s documentary that featured convicts telling juvenile delinquents in stark terms what was ahead if they didn’t “straighten up and fly right.” And, while I’m not saying we need a nation of doctors driving their patients to sobbing during annual physical checkups, I think most Americans really could use a reality check from their doctors.

So my moral here is, on one level, “Tell your doctor to give it to your straight.” Demand a thorough look under the hood. But on a much larger level, I think this discussion goes to the heart of debate over health reform and the individual mandate.

How the individual mandate could ‘scare us straight’

When I think about the individual mandate, I don’t think about individuals “forced to buy insurance.” I think of a nation of individuals who are currently falling outside the health care system because they can’t afford insurance – or are denied individual health insurance coverage.

As a result, they can’t get even the annual checkups they need to 1) head off disaster from an unseen condition that a physical exam can reveal or 2) get educated – and maybe “scared straight” – by their doctors about the serious, life-threatening and life-shortening conditions that they’re likely to develop because of their behaviors.

In the employer-sponsored benefits world, benefits managers are already getting the message: that they need to help employees look at their lifestyles so they can head off serious medical conditions. It’s an exercise that not only stands to help the employee’s health, but improve the health of a company’s bottom line by lowering its insurance premiums. They’re “forcing” employees to educate themselves and, hopefully, change course.

The individual mandate: I’d predict that it will put millions back on to a healthier and, – dare I say  – more “straight” path.