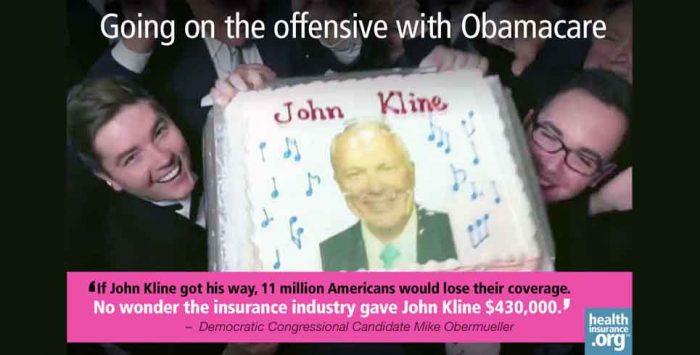 Unless you unplugged your TV back in 2010 and never plugged it back in, you no doubt have seen a ton of ads attacking Obamacare. Chances are not nearly as great that you’ve seen any ads supporting the law.

Of the nearly half a billion dollars that has been spent on political ads mentioning the Affordable Care Act since 2010, just a little more than 6 percent has been spent on advertising that portrayed the law in a favorable light. That might be about to change, as at least some Democrats reportedly have decided that they can win votes by reminding people how the law benefits them.

And if candidates are as clever as former Minnesota State Rep. Mike Obermueller, a Democrat who is running to unseat Republican Rep. John Kline, they might be able to persuade voters that if Congress actually did repeal Obamacare, as Kline advocates, the biggest winners would not be you or me or other regular folks. No, the biggest winners would be insurance company executives.

In Obermueller’s attention-getting ad, we first see Kline railing against Obamacare and bragging about his role in shutting down the federal government last year. (This isn’t particularly surprising, based on Kline’s far-right-leaning legislative priorities.)

Then we see a bunch of middle-aged men (and a few women) in dark suits dancing in their offices and on what looks like a boardroom table and breaking out the champagne. And we hear Obermueller’s voice tell us that, for insurance companies, Kline’s words are “music to their ears.”

If Kline had his way, Obermueller says, “Insurance companies would go back to charging whatever they want. Charging women more for health coverage. Denying coverage for preexisting conditions. And even dropping coverage when you get sick.”

And then this: “If John Kline got his way, 11 million Americans would lose their coverage. No wonder the insurance industry gave John Kline $430,000.”

The spot ends with Obermueller saying that, “I approve this message because I will work to fix Obamacare – and I’ll never get played by the insurance industry.”

As humorous as the ad is, it rings true to me, a former insurance executive who used to dress like those guys dancing on the table.

About the only part of the Affordable Care Act the insurance industry likes is the part that requires Americans to buy coverage from private insurers if they’re not eligible for a public program like Medicare or Medicaid. Many executives of for-profit insurers in particular would love to see Congress get rid of the consumer protections in the law because they make it more difficult for them to maintain the profit margins their shareholders expect.

Earlier this month, Kantar Media CMAG, a company that analyses spending on advertising, reported that $445 million has been spent on political ads since the Affordable Care Act was passed in 2010. Opponents of the law outspent supporters by more than 15 to 1.

Kantar didn’t speculate on where that $418 million came from, but chances are at least some of it came from the insurance industry. In 2009 and 2010, America’s Health Insurance Plans, the industry’s biggest PR and lobbying organization, funneled more than $102 million to the U.S. Chamber of Commerce to finance the Chamber’s anti-reform TV spots, according to the National Journal.

Obermueller’s ads have been airing on TV stations in Minneapolis and on the Internet since mid-May. This is a rematch between Kline and Obermueller. Although President Obama carried Minnesota’s second Congressional district in 2012, Kline, who has represented the district since 2003, won 54 percent of the votes to Obermueller’s 46 percent.

A lot of eyes will be on this race to see if Obermueller’s support of Obamacare, and his promise to “fix” instead of repeal Obamacare, will help him win this time.