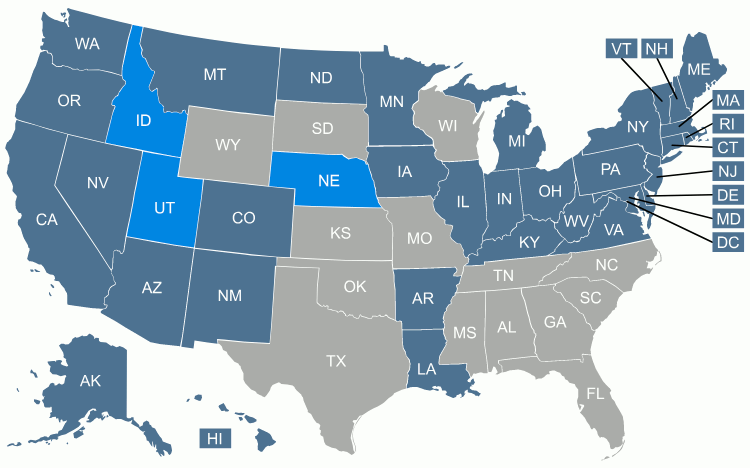 Download this spreadsheet for full details for each state. (PDF)

As we near the 10th anniversary of the implementation of the Affordable Care Act, its advocates are celebrating the law for its delivery of affordable comprehensive health insurance to millions of Americans. But while provisions of the law have indeed lowered coverage costs for many, there remain large segments of the individual health insurance market that – for a variety of reasons – continue to face unaffordable premiums.

There are currently about 2.3 million people caught in the coverage gap in 14 states that have refused to expand Medicaid. Their household incomes are under the federal poverty level, so paying full price for health insurance is probably a non-starter.

Millions of Americans also have incomes above 400 percent of the poverty level, but not dramatically so. And thanks to the subsidy cliff, they can be facing premiums that are 25 percent – or more – of their income, depending on where they live.

Others are caught by the family glitch, and although their coverage is technically considered “affordable,” that may not actually be the case.

If you’re among these consumers – and you’ve looked at all the on- and off-exchange options for regular health insurance and simply cannot afford them – it’s worth at least weighing the pros and cons of short-term coverage.

What is short-term health insurance?

Designed for healthy individuals and families, short-term policies provide an affordable safety net while switching from one life event to another without a comprehensive health plan. Short-term plans use very basic medical underwriting to determine an applicant’s eligibility for coverage and also have blanket exclusions on pre-existing conditions, which means they won’t cover any medical conditions that policyholders had before the plan took effect.

Prior to 2017, short-term health insurance was defined by the federal government as a plan with a duration of less than one year. The federal rules changed in 2017, when short-term policy durations were limited to less than three months. (Short-term plans with longer durations were still available for sale through the end of March 2017, as long as they were scheduled to terminate on or before December 31, 2017. As of April 1, 2017, no short-term plans could be sold with durations of three months or longer.)

The Obama Administration had sought to ensure that short-term plans would only be used for their original intent: as a stop-gap measure before another plan kicks in. The Trump Administration, however, issued new regulations to roll back the restrictions on short-term plans. And as of October 2, 2018, federal rules allow short-term plans to have initial terms of up to 364 days and also allow those plans to renew as long as the total duration of a single plan doesn’t exceed 36 months.

Can I buy short-term insurance in my state?

What are the advantages of short-term health plans?

Short-term health insurance plans are considered by many to be affordable – offering lower premiums and a wide range of deductibles – but also offering many buyers immediate enrollment, and a degree of flexibility when it comes to providers, services and plan duration.

A lower monthly premium is the primary draw for short-term plans. Consider a family of four, living in southwestern Wyoming and earning a household income (there’s an ACA-specific calculation for household income) of $105,000/year, which is just over the upper limit for premium subsidy eligibility in 2019. The parents are around age 45, with two young children. For 2020, the cheapest Bronze plan they can get in the exchange would cost more than $2,000 per month in premiums. And that particular plan has a family deductible of $9,000 and a maximum out-of-pocket exposure of $13,500 for the family.


But there are numerous short-term plans available to them, with premiums that range from a little more than $200/month to more than $1,400/month. Some have maximum terms of six months, while others allow up to 364 days of coverage. There are several plan designs available, and although none of them are as comprehensive as ACA-compliant plans, the trade-off is that they have much lower premiums.

(It should be noted that if this family had a household income of $100,000, instead of $105,000, they would be eligible for a premium subsidy of more than $2,200 per month, which would allow them to choose from several free plans in the Wyoming exchange, and several others with premiums under $500/month. Contributions to pre-tax retirement accounts and/or a health savings account – if they selected an HSA-compliant health plan – would potentially allow them to get their household income into this subsidy-eligible range. In that case, they would obviously be better off with an ACA-compliant plan instead of a short-term health plan.)

If short-term coverage is available in your state, there are some features with obvious appeal for consumers who are in dire straits.

What are possible pitfalls of short-term plans?

Critics of short-term plans note that short-term coverage isn’t comprehensive and doesn’t cover pre-existing conditions. Critics also caution that policyholders could find themselves subject to balance billing, and to post-claims underwriting, in which the insurer goes back through the person’s medical history after they have a claim, to determine whether any pre-existing conditions are involved.

What are some of the factors that might make consumers reluctant to buy short-term coverage?

Even now that the new rules have taken effect in many states, that last point is still important to keep in mind. If you purchase a 364-day plan in July and then suffer a serious illness or injury the following April, you could find yourself in a predicament if the plan you purchased was not guaranteed-renewable. (Under the new rules, insurers have the option to offer guaranteed renewability, but are not required to do so).

Depending on your medical situation, you may not be able to purchase another short-term plan when yours expires in June. And you wouldn’t be eligible for a special enrollment period to buy an ACA-compliant plan, since the termination of a short-term plan is not a qualifying event. More than likely, you’d have to wait for open enrollment in order to sign up for a new plan, which would take effect January 1.

So you could find yourself uninsured for several months (in this case, July through December), and it might be at a time when you have ongoing medical needs related to the illness or injury that made you uninsurable for a second short-term plan. This is complicated, and certainly requires more than a passing glance when you’re considering what coverage option to purchase.

A destabilizing effect on the ACA-compliant market?

The Trump Administration ostensibly rolled back the regulations on short-term plans in order to allow more consumer choice, but this action has been widely criticized as having a destabilizing effect on the individual health insurance market — where about 15.1 million Americans had coverage as of 2019. (That was down from 17.6 million as of 2017; the expansion of short-term plans is one of the factors contributing to the decline in individual market enrollment.)

This is especially true when you consider the fact that the ACA’s individual mandate penalty no longer applies, as a result of the GOP tax bill that was enacted in 2017. This makes it easier for healthy people to opt for a medically underwritten short-term plan instead of ACA-compliant coverage (some states have implemented their own versions of the individual mandate, but this is not widespread).

Now that short-term plans can again be purchased for up to 364 days in some states, it will help healthy people avoid the ACA-compliant market in favor of a cheaper option. The coverage is less robust in the short-term market, but some healthy people see it as a valid trade-off for lower premiums.

The problem is that those healthy people are the ones who are needed in the ACA-compliant market in order to keep the market stable. The final rule estimated that 600,000 people would newly enroll in short-term plans in 2019 as a result of the new rules; 200,000 of them from the existing on-exchange individual market, 300,000 from the off-exchange market, and 100,000 who were uninsured as of 2018. So the majority of the people expected to enroll in short-term plans as a result of the new rules were expected to be transitioning away from the ACA-compliant individual market (both on- and off-exchange major medical plans are ACA-compliant).

This point was reiterated time and again in the 2019 rate proposals that insurers filed for ACA-compliant plans, with insurers in many states noting that they expect increased morbidity (ie, overall poorer health) in their risk pools in 2019 because healthy people would have access to medically underwritten short-term health plans.

For people who get premium subsidies, higher premiums in the ACA-compliant market are offset by larger subsidies. But for people who pay full price because they aren’t eligible for subsidies, the additional premiums necessary to cover an increasingly old and sick risk pool will be borne by the policy-holder alone.

Keep your ACA-compliant coverage if you can

Obamacare has made it easier for much of the previously uninsured population – including those who are temporarily uninsured – to obtain high-quality individual health insurance. The law has done a great job of providing considerable financial assistance in the form of cost-sharing subsidies and premium subsidies.