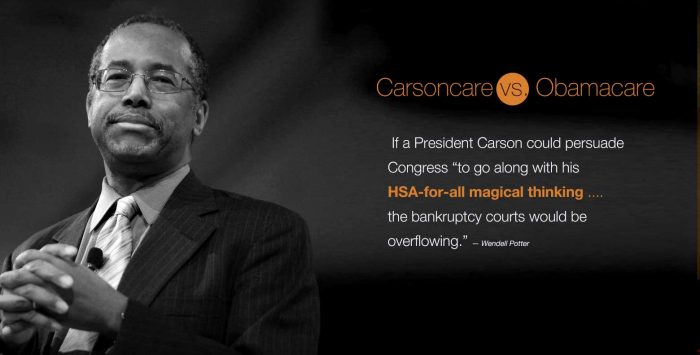 Former neurosurgeon Ben Carson promises in a new campaign ad that if we elect him president, he’ll solve the nation’s problems by thinking “out of the box.” It’s not the first time he used that line. He’s used it often, in fact, when he’s been asked about health care.

But from what he’s told us so far about what he would do with Obamacare, which he has called a “monstrosity” and has likened to slavery – and it’s clear he’s as deep as he can get in an old box that’s been around for decades.

Like other Republican candidates over the years, Carson wants to end health insurance as we know it, replace the plans most of us are in now with so-called “catastrophic” plans, and put us into health savings accounts. For Carson, that would apply just as much to folks on Medicare and Medicaid as it would to the rest of us.

Carson is convinced that the way to fix the U.S. health care system is simple and straightforward: Get rid of Medicare and Medicaid and the comprehensive private health plans most of us have now. In their place would be health savings accounts, which we apparently would be required by law to have. To make sure we start each year with at least a few bucks in our federally mandated HSAs, Carson would direct the government to put $2,000 in them every January.

To Carson, private insurers and government programs are unnecessary middlemen – and the reason why health care costs keep going up. So, he says, we need to sweep them into the ash heap of history.
Here, in his own words, is what he wrote in an op-ed for the Washington Times a couple of years ago:

In order to right the ship, we need to return the responsibility for good health care to the patient and the health care provider. One of the best ways to do this is through health savings accounts, which patients can control. Even if the federal government provided such an account for every American citizen that was increased by $2,000 each year, it would cost less than $700 billion a year and everyone would be covered.

He went on to say:

This is just the basic framework of an alternative system to Obamacare that involves thinking outside of the box.

As far as I can tell, the only outside-of-the-box thinking here is the $2,000 annual contribution from the feds. The other details he provides are pretty skimpy.

Not enough details to fill a box

He doesn’t tell us, for example, how adequate (or more likely, how inadequate) the coverage under Carsoncare would be. But to him, the way we as a nation can get to universal coverage is by setting us all up with an HSA. “With additions from positive and creative individuals, it (his HSA-for-all plan) could provide universal coverage that is simple to understand and truly affordable,” he wrote in his Washington Times piece.

Carson believes that under his HSA-for-all plan, not only would we all have at least a little bit of money to pay for medical care, health care inflation would surely come to a halt. He predicts that without the middlemen, who in his mind are the main culprits behind skyrocketing health care costs, doctors, hospitals and drug companies would stop raising their prices. That’s his theory anyway, apparently based on the assumption that if the demand for medical services goes down—as it probably would when Americans have less coverage—the cost of those services will go down.

Unlike Barack Obama, Carson makes no promise that, “if you like your health plan, you can keep your health plan.” For good reason. All but those of us who are enrolled in an employer-sponsored plan would lose our current coverage and be put into an HSA.

We’d have no choice, in fact. Under Carsoncare, future Americans would be issued an HSA along with a birth certificate.

“Here’s my solution,” he said at the National Prayer Breakfast in Washington in 2013. “When a person is born, give them a birth certificate, an electronic medical record and a health savings account to which money can be contributed pre-tax from the time you’re born to the time you die.”

Carson wouldn’t actually get rid of the middleman – at least not private insurance companies. As he wrote for the Washington Times, at least a quarter of every $2,000 federal contribution would be devoted to “bridge insurance or catastrophic insurance.” People in catastrophic plans – which are designed to cover the costs of a serious illness or injury – typically have to pay several thousand dollars for care before their coverage kicks in. They’re sort of like high-deductible plans on steroids.

People who have the financial means to do so could supplement the $2,000 they’d get from the government. Wealthy folks would be able to stash a lot of their cash in their HSAs if they wanted to. In fact, says Carson, “all citizens would have the right to contribute to their health savings accounts from other sources without limit.”

What that means: The only ones who could act on that right would be the wealthiest among us. For the not-so-wealthy (most Americans), Carson would let them tap the HSAs of family members if needed – if, of course, there was any money in those other HSAs to tap.

As for Medicare, unlike his fellow GOP presidential candidates, all of whom have promised to keep the program in place (albeit with big changes, like having the government provide Medicare beneficiaries with a set amount of money to buy coverage from private insurers), Carson reportedly would get rid of Medicare entirely.

“The former neurosurgeon acknowledges he would abolish the program altogether,” wrote Kyle Cheney and Jason Millman of Politico last Thursday.

Three days later, though, Carson said he had been misunderstood, that he wouldn’t get rid of Medicare, or even Medicaid, at least not entirely, or at least not right away. For people who want to stay in the government programs, he said Sunday on Fox News, “I’m not going to deny you the privilege of doing that.” Apparently Medicare and Medicaid would disappear when all the current enrollees die or otherwise drop out of those programs.

The rich would, you know, get richer

The big winners under Carsoncare, as you can probably see, would be rich Americans. The government wouldn’t put a dime more into a poor person’s HSA than it would put into Warren Buffett’s or Bill Gates’. That’s by design. Carson’s objective is to get everybody off the government health care dime.

By making folks pay more out of their own pockets for medical care – regardless of how much money they might have in their pockets (or their HSAs) – they will, he believes, take more responsibility for their health. If they don’t and wind up with bills they can’t pay, too bad so sad, as a former colleague of mine in the insurance industry used to say.

Among health policy experts who don’t see the world as Carson does is Timothy Jost, also a former colleague of mine from my days as a consumer representative to the National Association of Insurance Commissioners. Jost, a Washington and Lee University professor who specializes in health care law and regulation, was quoted last year as saying that, “For a person who has serious health problems or for a person who has a low income, a $2,000 health care savings account is worthless, or near worthless. It would not either allow them to buy health insurance or allow them to afford health care or anything other than very routine primary care and some medications.”

I actually disagree with Jost. Carson’s proposal is worse than worthless. Millions of people who now have decent coverage – many for the first time in years, thanks to the reform law Carson considers a “monstrosity” – would once again be out of luck (and most of their money) if they had to get care that didn’t meet the definition of a catastrophe.

Bottom line: If President Carson would somehow be able to persuade Congress – even a GOP-controlled Congress – to go along with his HSA-for-all magical thinking, the poor would get poorer and the rich would get richer.

And the bankruptcy courts would be overflowing.

Talk about a monstrosity.