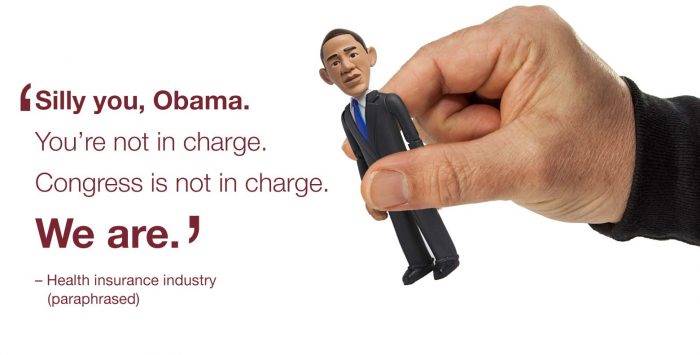 Well, well, well. It seems as if the Democrats have once again come down with Public Option Fever.

Forgive me for being cynical, but folks, until we address the democracy-stifling and status-quo protecting influence of Big Money in politics in this country, the Public Option – which the health insurance industry vehemently opposes – is not going to become a reality anytime soon. And the Democrats know it.

Clinton rededicates herself to Public Option

Hillary Clinton’s campaign issued a statement over the weekend reiterating her support for the Public Option, which, if ever established, would be a government-run health insurance plan that would compete with private insurance companies. Note that I said the statement reiterated her support for a Public Option. Clinton has been a Public Option advocate for years. She supported its creation eight years ago when she ran for president the first time, just as Barack Obama did. (And, for that matter, just as John Edwards did.)

The former secretary of state will “affirm her commitment to give Americans in every state the choice of a public-option insurance plan, something she has supported during this campaign and going back to her 2008 presidential campaign.”

Back in February, Clinton said via her campaign website that should she face a Republican-controlled Congress, which undoubtedly would deep-six any bill that would establish a Public Option at the federal level, she would work with governors and encourage them to implement state-based Public Options.

So why did she feel the need to rededicate herself to the Public Option last weekend? We can assume Bernie Sanders had something to do with that. Her statement came just three days before the Vermont senator, a long-time Single Payer advocate, endorsed her at a rally in New Hampshire. (The insurance industry’s political allies, including a few influential Democrats, have contended that a Public Option is just a backdoor way to get to single-payer healthcare, which the industry considers an existential threat.)

Almost as if on cue, and two weeks before the Democratic National Convention opens in Philadelphia, the Journal of the American Medical Association published a piece by none other than President Obama extolling the virtues of a Public Option. He called on Congress to do something it wouldn’t do in 2010: add the Public Option to Obamacare.

When I saw that, I rolled my eyes. Here’s why: even though he said when he was still just a candidate for president that a Public Option was necessary “to keep private insurance companies honest,” after he took office he and his staff came under the influence of the insurance industry. As president, Obama essentially only gave lip service to the Public Option.

At the beginning of the healthcare reform debate in 2009, Obama and most Congressional Democrats said private insurers would be less able to gouge consumers with unreasonably high premiums and deductibles if they had to compete with a government-run plan. That’s because even though such a plan would have to abide by all the same rules as private insurers, the Public Option health plan would not be run by Wall Street and consequently would not need to allocate a substantial portion of premium revenue to reward shareholders (and, of course, insurance company CEOs).

While they were saying that publicly, behind closed doors Obama administration officials were in constant communication with insurance industry lobbyists, and those lobbyists made it abundantly clear to the White House that while the industry could go along with most of the reform proposals Democrats were considering, they would not tolerate a Public Option.

So without cluing in most Congressional Democrats, Obama began to backpedal on his Public Option pledge, even though it was still very popular among Democrats in the House, including many of the more conservative Blue Dog Democrats.

As months went by, many of those House members told me privately that they were perplexed and, eventually, angry and demoralized, that the White House had gone mute on the Public Option while they were still out there campaigning for it, in many cases risking their chances of getting reelected by doing so.

They were hopeful that that would change when Obama delivered a major address on reform to a joint session of Congress on September 9, 2009. And his first comments about the Public Option gave them encouragement:

… an additional step we can take to keep insurance companies honest is by making a not-for-profit Public Option available in the insurance exchange. Now, let me be clear. Let me be clear. It would only be an option for those who don’t have insurance. No one would be forced to choose it, and it would not impact those of you who already have insurance. In fact, based on Congressional Budget Office estimates, we believe that less than 5 percent of Americans would sign up.

Despite all this, the insurance companies and their allies don’t like this idea. They argue that these private companies can’t fairly compete with the government. And they’d be right if taxpayers were subsidizing this public insurance option. But they won’t be. I’ve insisted that like any private insurance company, the public insurance option would have to be self-sufficient and rely on the premiums it collects. But by avoiding some of the overhead that gets eaten up at private companies by profits and excessive administrative costs and executive salaries, it could provide a good deal for consumers, and would also keep pressure on private insurers to keep their policies affordable and treat their customers better, the same way public colleges and universities provide additional choice and competition to students without in any way inhibiting a vibrant system of private colleges and universities.

I heard that speech live, and nearly fell out of my seat in the House gallery when the President of the United States mentioned me and what I was saying at the time:

As one former insurance executive testified before Congress, insurance companies are not only encouraged to find reasons to drop the seriously ill, they are rewarded for it. All of this is in service of meeting what this former executive called “Wall Street’s relentless profit expectations.”

Hands down, that was one of the biggest thrills of my life. But my heart sank a few minutes later when Obama added this:

To my progressive friends, I would remind you that for decades, the driving idea behind reform has been to end insurance company abuses and make coverage available for those without it. The Public Option – the Public Option is only a means to that end – and we should remain open to other ideas that accomplish our ultimate goal.

Will the Public Option be thrown under the bus again?

I knew when I heard that that Obama was not going to fall on his sword to keep the Public Option alive, that the insurance industry had gotten to him. With that statement, he essentially was throwing the Blue Dogs who had supported the Public Option under the bus.

So, to tell you the truth, I didn’t think much of Obama’s endorsement seven years later in the Journal of the American Medical Association. It struck me as being just another political ploy. Throwing a bone to gullible Democratic voters.

Why do I call those voters gullible?

Because Obama and Clinton are not leveling with us. They’re not telling us the truth, which is that the Public Option doesn’t have a snowball’s chance of being enacted, even at the state level, as long as the insurance industry and its allies are able to continue spending whatever it takes to influence both elections and public policy.

Things have not changed since Obama signed the Affordable Care Act that would make it more likely that a Public Option can be created under a Clinton administration. The insurance industry still calls the shots in Washington and, for that matter, the state capitals. 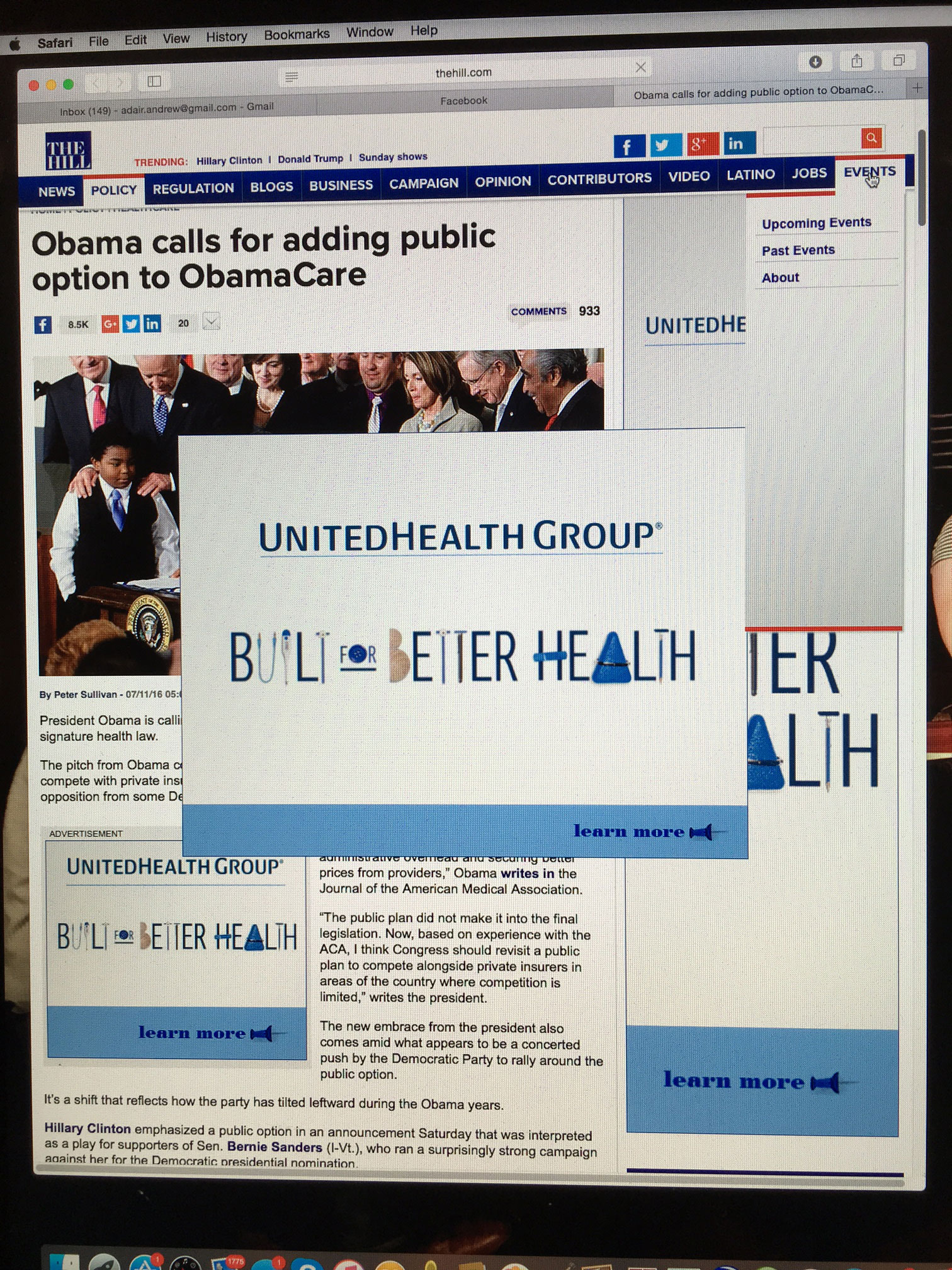 Gosh. If this isn’t an omen, what is?

Almost as if to make that point abundantly clear, to, frankly, rub our noses in it, the nation’s biggest private health insurance company, UnitedHealthcare, ran an ad over – yes, over – the story about Obama’s JAMA article that appeared in The Hill, a publication that every member of Congress, every staffer, every lobbyists reads every day.

Take a look at this screen shot:

That was sent to me by a former Congressional staffer who worked on the reform legislation.

Here’s the subject line of his email:

He told me that not only was the ad obscuring the first paragraphs of the story, the ad initially could not be closed. In other words, readers couldn’t get rid of the ad to read the whole story.