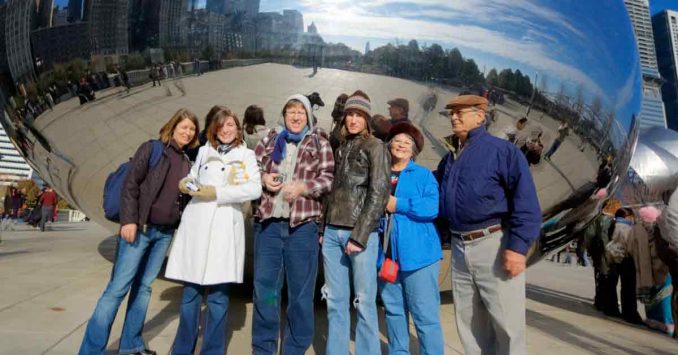 Most beneficiaries are eligible for Medicare coverage because they’re at least 65 years old. But Medicare eligibility is also triggered when a person has been receiving disability benefits for two years, or has ALS or end-stage renal disease. Nationwide, about 12% of people enrolled in Medicare are under 65; in Illinois, it’s about 11%; the state has about 260,000 Medicare beneficiaries who are under 65.

Although Medicare is funded and run by the federal government, enrollees can choose whether they want to receive their benefits directly from the federal government via Original Medicare or enroll in a Medicare Advantage plan offered by a private insurer, if such plans provide service in their area. There are pros and cons to Medicare Advantage and Original Medicare, and no single solution that works for everyone.

There are Medicare Advantage plans for sale throughout Illinois, with plan availability ranging from 5 plans to 76 plans, depending on the county (most counties have at least 20 plans available as of 2022).

Twenty-two percent of Medicare beneficiaries in Illinois were enrolled in Medicare Advantage plans as of 2018, compared with an average Medicare Advantage enrollment of 34% nationwide. But by May 2022, about 38% of the people with Medicare in Illinois — 876,503 people — had private coverage (as opposed to Original Medicare; that figure does not include people who had private plans to supplement Original Medicare).

The vast majority of those people are enrolled in Medicare Advantage plans, but there are also some Medicare beneficiaries with Medicare Cost plans in Illinois, accounting for a very small number of the private plan enrollees. Nationwide, the percentage of private plan Medicare coverage enrollment had increased to about 46% by 2022, so the increase in Illinois is in keeping with the national trend.

Between late 2019 and early 2022, UnitedHealth Group saw a 34.1% increase in Medicare Advantage enrollment in Illinois. With 270,162 Illinois residents enrolled in its MA plans in February 2022, the carrier had the highest market share – 40% – out of a field of 24 carriers selling MA plans in the state. 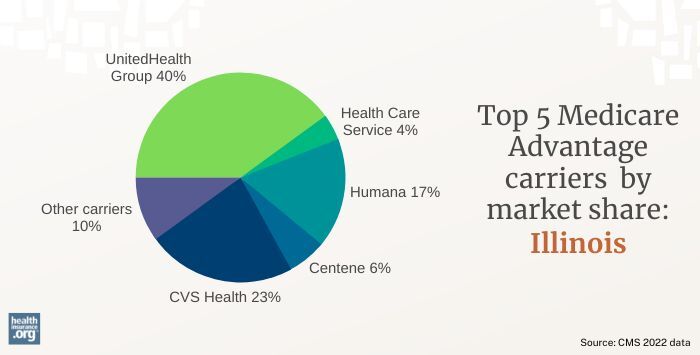 Original Medicare does not limit out-of-pocket costs, so most enrollees maintain some form of supplemental coverage. More than half of Original Medicare beneficiaries nationwide receive their supplemental coverage through an employer-sponsored plan or Medicaid. But for those who don’t, Medigap plans (also known as Medicare supplement plans) are designed to pay some or all of the out-of-pocket costs (deductibles and coinsurance) that Medicare beneficiaries would otherwise have to pay themselves.

Medigap plans are sold by private insurers, but the plans are standardized under federal rules, with ten different plan designs (differentiated by letters, A through N). The benefits offered by a particular plan (Plan C, Plan G, etc.) are the same regardless of which insurer is selling the plan. So plan comparisons are much easier for Medigap policies than for other types of health insurance; consumers can base their decision on premiums and less tangible things like customer service, since the benefits themselves are uniform.

Unlike other private Medicare coverage (Medicare Advantage plans and Medicare Part D plans), there is no annual open enrollment window for Medigap plans. Instead, federal rules provide a one-time six-month window when Medigap coverage is guaranteed-issue. This window starts when a person is at least 65 and enrolled in Medicare Part B (you must be enrolled in both Part A and Part B to buy a Medigap plan). But Illinois has stronger consumer protections in this area than most other states: Illinois has long protected the right of beneficiaries under age 65 to enroll in Medigap (discussed below) and has added a new limited annual enrollment window for some Medigap enrollees, available as of 2022.

In 2021, Illinois enacted legislation that created a new Medicare Supplement Annual Open Enrollment Period, available as of 2022. The annual enrollment opportunity is fairly limited, but it does still go beyond federal rules. Under the new Illinois law, Medigap enrollees between the ages of 65 and 75 have an annual window during which they can switch to a different Medigap plan, offered by their current Medigap insurer, as long as the plan offers equal or lesser benefits (so a person could switch from Plan F to Plan G, but not from Plan A to Plan G, for example). The window starts on the beneficiary’s birthday, and lasts for 45 days.

People who aren’t yet 65 can enroll in Medicare if they’re disabled and have been receiving disability benefits for at least two years, and 13% of Medicare beneficiaries in Illinois — about 300,000 people — are under 65 years old. Federal rules do not guarantee access to Medigap plans for people who are under 65, but the majority of the states, including Illinois, have enacted laws to ensure at least some access to private Medigap plans for disabled enrollees under the age of 65.

Illinois was one of the first to do so (see Illinois Insurance Code, Section 363). Since 1989, Illinois has required all Medigap insurers to sell policies to disabled Medicare beneficiaries. Medigap insurers must sell any of their available plans to beneficiaries under age 65, with a six-month guaranteed-issue window that starts when the person is enrolled in Medicare Part B (or when they are determined eligible for retroactive Medicare Part B coverage).

And while Medigap insurers in Illinois can charge an under-65 beneficiary higher premiums than they would charge a 65-year-old, beneficiaries under age 65 cannot be charged more than the insurer’s highest on-file rate for people over age 65. So a Medigap insurer could, for example, charge a 45-year-old the same premium they would charge an 85-year-old, but they cannot have an entirely separate set of under-65 rates that are higher than any of the age-based premiums for people over 65.

Illinois also goes a step beyond what many other states provide in terms of Medigap access for people under the age of 65: A disabled Medicare beneficiary who did not purchase a Medigap plan during their initial six-month enrollment window can buy a plan from Blue Cross Blue Shield of Illinois between October 15 and December 7 (although this is the same window during which Medicare beneficiaries have open access to Medicare Part D plans and Medicare Advantage plans, this is not a general open enrollment period for Medigap plans).

Blue Cross Blue Shield of Illinois also offers year-round guaranteed-issue coverage, regardless of medical history and at standard premiums, for people who are over the age of 65 and who are no longer in their initial enrollment period for Medigap. This is a fairly rare provision; most states do not have a year-round guaranteed-issue option for Medigap plans after a person’s initial enrollment period has closed.

As of 1999, a decade after Illinois began requiring Medigap insurers to offer plans to disabled beneficiaries under age 65, there were only 14 states with laws requiring Medigap insurers to offer even a single plan to people under age 65. Today, there are at least 33, although there are still several states that have made no provisions to ensure access to Medigap plans for disabled Medicare beneficiaries.

Insurers in Illinois are offering 23 stand-alone Medicare Part D plans for sale in 2022, with premiums that range from about $7 to $94/month.

Medicare Part D enrollment follows the same basic schedule as Medicare Advantage enrollment: Beneficiaries can pick a Part D plan when they’re first eligible for Medicare (or when they lose creditable drug coverage they had under another plan), or during the annual open enrollment period in the fall, from October 15 to December 7.


How does Medicaid provide financial assistance to Medicare beneficiaries in Illinois?

Our guide to financial assistance for Medicare enrollees in Illinois includes overviews of these benefits, including Medicare Savings Programs, long-term care coverage, and eligibility guidelines for assistance.

Medicare in Illinois: Resources for Medicare beneficiaries and their caregivers