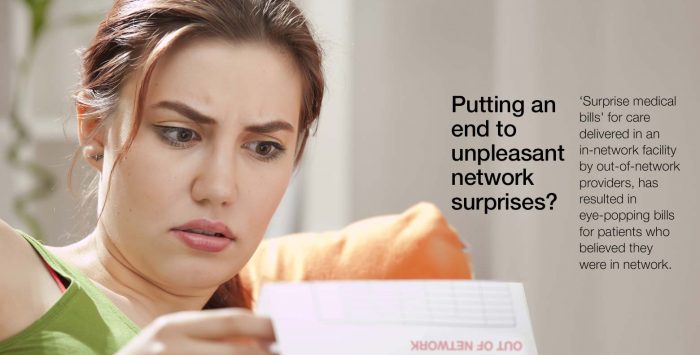 Issues with network adequacy – the ability to get the right care through a health insurance plan, at the right time, without traveling too far – are not new. Long before the Affordable Care Act was enacted, we at Families USA heard from consumers struggling to access mental health providers, other specialists, and even primary care providers through their health plans’ networks.

But consumers also faced other long-standing problems that added to consumer uncertainty: inaccurate provider directories and surprise medical bills that come when patients get care in an in-network facility from providers who are out of network.

Such issues can lead consumers to feel that health insurance is nothing more than a plastic card.

Now, more than ever, consumers are hearing more negativity about network adequacy. Health insurance networks have evolved in recent years with the increasing prevalence of designs such as narrow networks and tiered networks, which can make access to care from providers at an affordable cost even more difficult for some consumers to secure.

For example, researchers at the University of Pennsylvania’s Leonard Davis Institute of Health Economics found that among 2014 Silver-level qualified health plans, 41 percent nationwide had “small” or “x-small” networks. Under their definition, this means only 10-25 percent (small) or less than 10 percent (x-small) of office-based physicians in the area were in-network.

Among HMO plans – which (as documented by the Robert Wood Johnson Foundation) make up an increasing share of the offerings on the 2016 marketplaces in many regions – the share of small or x-small networks increased to 55 percent.

A coordinated push for improvement

These oft-mentioned consumer concerns have not fallen on deaf ears. For more than 18 months, regulators at the  National Association of Insurance Commissioners (NAIC) – have been working in collaboration with a large group of stakeholders to draft model legislation to address these consumer concerns.

Last week, the NAIC unanimously voted to adopt the Network Adequacy Model Act – draft legislation that states can use as a foundation for enacting a state law to ensure network adequacy in health insurance plans. The legislation – when enacted by states – has the potential to make significant improvements to insured consumers’ access to care.

The provisions are far-reaching

Key provisions in the Network Adequacy Model Act include:

These provisions build on the network adequacy requirements in the ACA and corresponding regulations, which require that each qualified health plan “Maintains a network that is sufficient in number and types of providers, including providers that specialize in mental health and substance abuse services, to assure that all services will be accessible without unreasonable delay.”

These ACA provisions are significant since, for the first time ever, they provide a national standard for network adequacy in private health insurance. However, they are non-specific and limited in scope, as they only apply to marketplace-qualified health plans and not any individual or group plans sold outside of the marketplaces.

States should therefore move to implement the NAIC model act, giving regulators authority to enforce meaningful network adequacy standards more broadly in their states. When they do so, they should also consider implementing some state-specific adjustments, such as stronger protections for tiered networks and quantitative standards for measuring network adequacy.

The latter is particularly important in light of the new federal Proposed HHS Notice of Benefit and Payment Parameters for 2017 regulation, in which HHS goes beyond what the NAIC had in mind by proposing requirements that all states with federally facilitated marketplaces implement such standards. If the rule is finalized, policymakers and regulators in those states will have to enact their own quantitative network adequacy standards or be subject to federally imposed requirements.

Action in the states

The 2016 state legislative sessions are fast approaching, and policymakers are doing their prep work now for many of the bills they will seek to champion. There is already evidence that the NAIC Network Adequacy Model Act and the problems insured consumers experience with provider access may be spurring some of those bills across the country:

At the state-level, support for implementing policies to ensure that, once enrolled in coverage, consumers can access the care they need through in-network providers does not fall markedly along party lines. Policymakers and regulators of all stripes hear from constituents who, due to no fault of their own, get hit with surprise bills from out-of-network providers they had no intention of seeing or who are unable to secure an appointment with an in-network provider after numerous calls to doctors listed in a health plan’s directory.

The NAIC has done much of the heavy lifting in creating the foundation on which to build workable provider access protections for insured consumers. It’s now up to each state policymaker and regulator to determine the best way forward to enact the NAIC act, with state-specific adjustments, for consumers who rely on insurance to deliver affordable access to care through in-network providers.

Claire McAndrew is Private Insurance Program Director at Families USA. She specializes in private insurance issues, including those related to the implementation of the Affordable Care Act’s health insurance marketplaces. She oversees Families USA’s advocacy work on marketplaces and frequently serves as a source of information on private insurance and health reform issues for policymakers and members of the media.