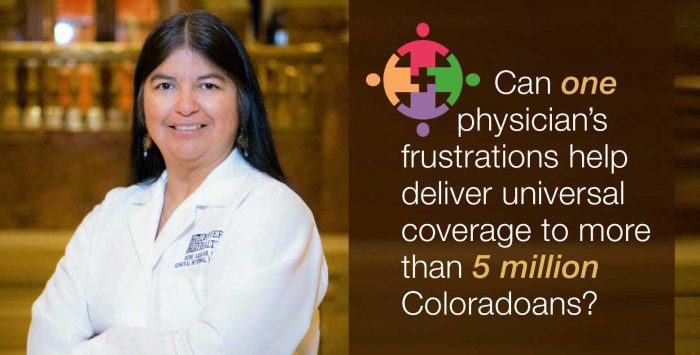 V. F. was a 40-year-old receptionist with diabetes. She did not have insurance. Once a year, before renewing her prescriptions, I insisted on seeing her for a checkup. At each of these visits, I found that her diabetes was not under control. Apologetically, she asked which of her medications were most important. She could not afford all of them.

At age 50, V.F.’s kidneys failed from uncontrolled diabetes and she needed dialysis. This qualified her for Medicare. Receiving dialysis three days a week made her weak. Her workplace could not accommodate her absences. She filed for disability and received social security. After exhausting her personal financial resources, she qualified for Medicaid.

As the years went by, V.F. lost a limb to amputation and had to use a wheelchair. She developed heart disease and had heart bypass surgery. At age 62, V.F. died from complications of diabetes, a treatable disease.

The view from one doctor’s office

As a primary care doctor in a Denver safety net clinic for 23 years, I saw many patients whose health stories echoed V.F.’s. They had diseases for which good treatment existed, but frequently they could not afford treatment. Dire consequences often followed. Patients ended up hospitalized, disabled, or dead for something that could have been treated easily as an outpatient. Ironically, once disabled, they qualified for substantial government aid.

It soon became clear to me that good health extends far beyond the doctor’s exam room, into the financing of care through the insurance system. I wondered why private corporations and politicians interested in wealth have more influence over the health of an individual than doctors do, and I began to think about what I could do to correct this imbalance.

The United States leads the world in wealth, but we lag far behind in health. Of the 25 wealthiest nations, we are the only one that does not provide some form of universal healthcare. In large part, it is our failure to cover everyone that forces us to spend almost twice as much per capita as other countries on health care. The desperate, destitute, and disabled are eventually treated in some capacity under Medicare, Medicaid, or the Emergency Medical and Treatment Labor Act (EMTLA), and everyone else’s expenses rise to cover those who can’t pay, pushing more and more people into debt.

Why won’t the U.S. provide everyone access to basic health care like the other leading nations of the world? Why won’t we invest in early interventions that save lives and improve our economy by enabling people to be productive members of society? The more I learned about our profit-driven health system and its harmful effect on vulnerable populations and society as a whole, the more I was compelled to advocate for change.

In 2007, I had the privilege of serving on the Vulnerable Populations Task Force of Colorado’s Blue Ribbon Commission on Health Care Reform. The Commission’s analysis showed that by enacting a single-payer financing system, Colorado could afford full access to health care for every resident and decrease spending by $1.6 billion in its first year. I was ecstatic to learn there was a solution that was both just and economical, and I was certain that the Commission would recommend this plan. Imagine my dismay when I was told by the chair of the House Committee on Health and Human Services: “that’s all good and well Dr. Aguilar, but this will never happen in the United States.”

Taking the fight to Colorado’s capital

Dismay led to action. I got involved in politics and in 2010, Dr. Aguilar became Senator Aguilar, determined to find a way to save lives (and money) and help Colorado become the first state in the nation to enact a single-payer health care system. With bill after bill, many colleagues in the Legislature and I fought for change but were blocked at every turn by the influence of big money, the health industry, and political cowardice.

In 2015, a referendum on health care reform was drafted but quickly dismissed by House leadership. With this rebuff, a group of activists and I decided to take universal health care directly to those who would benefit from it most – the people of Colorado. With hundreds of volunteers from across the state, over 156,000 signatures were collected and submitted in October 2015. ColoradoCare (Amendment 69) was approved for the ballot in November 2015.

It’s common sense to have a health care system that reins in costs and incentivizes public health. Under the current profit-driven system, the opposite occurs: we have skyrocketing costs and public health suffers. With ColoradoCare, priorities shift from private profit and short-term, isolated care for illness to public health and long-term care for wellness. Providers partner with patients to identify ways to keep them healthy and out of the hospital. Improved health lowers spending and a healthy workforce yields a robust economy. Everyone wins.

Businesses save a projected $3.8 billion on employee health.

ColoradoCare has no deductibles, no copays for preventive and primary care, and waives other copayments when they cause financial hardship. Most important, all Coloradans will be covered. There will no longer be burdensome medical debt or bankruptcy caused by medical bills. The current system is projected to leave more than 23 percent Coloradans underinsured in 2019. ColoradoCare covers 100 percent of the population with better benefits than the best plan on the ACA exchange.

ColoradoCare is fiscally conservative and socially just. Studies have been done, numbers crunched, and petitions signed. A cure for our ailing health care system is here for the taking. But when we’re fighting profit based health businesses with deep pockets and strong political ties, we face a formidable opposition of misinformation, fear, and lies to deceive people into sticking to the status quo.

A model for other states?

When Colorado voters recognize that profit-driven corporations do not have their best interests in mind, Colorado will usher in a new era of health and prosperity. And once Colorado shows that universal health care can be successful, other states will follow suit.

For V.F. and millions like her, I will not rest until this day comes.

Senator Irene Aguilar sponsored legislation to expand Medicaid in Colorado and to align the state’s health laws with the Affordable Care Act.  She has worked to ensure those without health insurance receive fair pricing for hospital care. Senator Aguilar has also passed laws to improve the lives of people with disabilities by providing funding for respite, support for applying for social security disability, and a voice at the table.