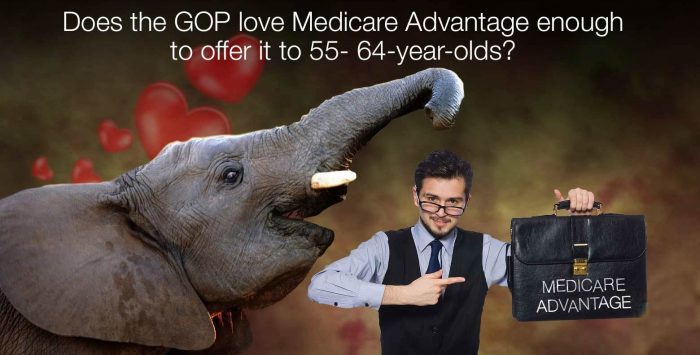 As the ACA marketplace undergoes a shakeout this fall, with premiums spiking and major insurers cutting back their participation, two Georgetown University healthcare scholars, Sabrina Corlette and Jack Hoadley, recently looked back at Lessons from Medicare as a source of stabilizing strategies for the ACA. The subtext was that when the market in what we now call Medicare Advantage (MA) plans was in worse shape than the ACA marketplace is now, a GOP-controlled Congress showered the program with love in 2003, sharply boosting payment rates. The result was that the Medicare Advantage market took off, with plan offerings multiplying and enrollment more than doubling between 2005 and 2010.

A second irony is that the success of the private Medicare market depends in large part on the existence of Medicare’s “public option” – traditional fee-for-service Medicare. The federal government pays MA plans on a per-enrollee basis, calculated to keep the rates the plans pay to providers close to the rates paid by traditional Medicare. The rate guardrails are reinforced by balance billing rules requiring out-of-network providers to accept Medicare rates from the plans if they accept Medicare at all (as 96 percent do).

Yet Republican lawmakers – like insurers themselves – are dead-set against a public option that might have the same effect in the ACA marketplace, where most insurers pay providers considerably more than Medicare rates. Hoadley notes that there’s no ideological inconsistency here. “Their bigger picture was to take Medicare, which was a mostly public program, and move it more in private direction. In the ACA, they would see the public option as taking a program they don’t like and moving it in a more public direction. They would not appreciate the irony.”

Oddly, those preferences suggest a place where Republican and Democratic interests might intersect. Among the raft of proposals that Hillary Clinton has floated to make healthcare more affordable and improve the ACA private plan marketplace is a Medicare buy-in for “near-elderly” adults, aged 55-64 – a proposal that almost made it into the Affordable Care Act before Senator Joe Lieberman killed it.

The idea is to offer a trusted and cost-effective source of insurance to some of those who lack access to employer-sponsored insurance – and also, possibly, to improve the risk pool in the ACA marketplace, and so lower costs, by taking out some of its older and presumably sicker members.

One might assume that Republicans would never go for a Medicare buy-in, as it would expand the ranks of those who get “government-run” insurance. But what if the buy-in were limited to Medicare Advantage plans, the GOP’s beloved Medicare stepchild?

Republicans might view a buy-in limited to Medicare Advantage as a gateway drug. At present, only 2 percent of Medicare Advantage enrollees switch to traditional Medicare, so those who came in via a buy-in would probably stay in. Increasing MA’s already-growing market share from the current 30 percent toward or beyond parity with traditional Medicare might be tempting to GOP lawmakers.

On the merits, the case for limiting a buy-in to Medicare Advantage plans is that unlike traditional Medicare, they are structured to meet ACA coverage requirements in one package. That is, Medicare Advantage plans cap enrollees’ yearly out-of-pocket medical costs and usually include a drug plan. To meet ACA coverage requirements, a buy-in to traditional fee-for-service Medicare would require either separate purchase of a drug plan and Medigap plan or a redesign of the “traditional” package, which at present covers 80 percent of hospital and doctor fees but does not cap enrollees’ yearly costs.

Hoadley is skeptical that Democrats would propose or embrace such a deal. “The political issue from the left is that it may be perceived as weakening traditional Medicare … it’s unclear whether the tradeoffs would work for Democrats.”

Conversely, Harold Pollack, a public policy professor at the University of Chicago, says that in the short term at least, “I don’t see Republicans doing it for the obvious reason that it would be propping up the Affordable Care Act.”

Longer term, however, if problems in the ACA marketplace intensify (and if Democrats retain the presidency), “Democrats will have to find a way to work with Republicans – and Republicans will be under pressure from the insurance industry to do something,” Pollack says.

If both sides are serious about compromise, “If you are going to expand Medicare, doing it via Medicare Advantage has a lot to be said for it,” Pollack allows. “Medicare Advantage folks have spent a lot of time making it attractive to seniors. People on it are quite satisfied.”

Who needs a buy-in?

Politics aside, what about the merits of a Medicare buy-in? Who would it help, and at what cost?

The pool of likely beneficiaries is fairly small. Presumably the buy-in would not be offered to roughly 24 million people* in the 55-64 age group who have access to employer-sponsored insurance – including retirees with ESI, whom Kaiser Family Foundation estimated to number 5.3 million in 2012. I doubt there’s a single member of Congress, senator or potential president other than Bernie Sanders with a more than theoretical interest in shaking up employer-sponsored insurance. A viable Medicare buy-in might prompt some employers to drop retiree coverage for those under 65.

The buy-in would be open to the uninsured in the 55-64 age band, who currently number about 3.4 million, and to those who get their insurance in the individual market, of whom there are probably a bit over 5 million. That includes a shade under 3 million in this age group in the ACA marketplace, most of them accessing government subsidies, and probably another 2 million-plus paying full price off-exchange.

For people in this rather small pool, the big question is whether subsidies would be structured more like those of the ACA marketplace or like those offered to Medicare beneficiaries. For low-income enrollees – those with incomes under 200 percent of the federal poverty level, the ACA actually offers more comprehensive coverage for less money than most Americans get from Medicare. But Medicare subsidies are far more generous than ACA subsidies for those with incomes over 200% FPL ($23,760 for an individual in 2017). And Medicare does further subsidize low-income enrollees with a variety of “dual eligible” programs in which premiums and out-of-pocket costs are paid by Medicaid.

The ACA offers no subsidies to those with incomes over 400% FPL – that is, over $47,520 for an individual or $64,080 for a couple in 2017. Medicare subsidies extend all the way up the income scale and cover three-quarters of the Part B premium for most new enrollees, so that they pay $122 per month for hospital and physician coverage combined, and usually another $34 a month on average for a prescription drug plan (or a similar additional premium for a Medicare Advantage plan with drug coverage). That’s the case for individuals with annual income of up to $85,000 – about 715% FPL – and for couples up to $170,000, which is over 1,000% FPL.

Relief for the not-so-poor elderly

A buy-in program might provide political cover to extend subsidies beyond the ACA’s 400% FPL cutoff. And that may be worth doing. On average, an unsubsidized benchmark Silver plan in the marketplace costs a single 60-year-old $635 per month. That’s 16 percent of income for someone earning just over 400% FPL ($48,000).

There’s no way a U.S. Congress will reduce those premiums to the level of those paid by seniors on Medicare. But a buy-in might provide an occasion to at least cap premiums as a percentage of income for people at all income levels. It might make good policy sense to cap premiums in this way specifically for older buyers, as their premiums are much higher than those of younger enrollees: in the ACA-compliant market, a 64-year-old pays three times as much as a 21-year-old for the same plan.

If one goal is to improve (or at least not damage) the ACA marketplace risk pool, it’s essential to avoid enticing higher-income 55- to 64-year-olds into Medicare while leaving lower-income enrollees in the age group (who tend to need more medical care) in the ACA marketplace. It should be all or nothing: the marketplace would have to be closed to this age group, and coverage at least as comprehensive and affordable offered in Medicare to all who are currently marketplace-eligible. If the whole age cohort were removed from the ACA marketplace, its effect on existing Medicare Advantage risk pools, or viability as a separate risk pool, would require actuarial study.

In absolute terms, a Medicare buy-in is not cheap. In 2008, CBO estimated buy-in cost for 62- to 64-year-olds at $633 per month. Nonetheless, if a (doubtless Democratic) president and Congress wanted to enrich subsidies, they might get a relative discount by adding a Medicare buy-in to the mix, since the care obtained would be reimbursed to providers at Medicare rates, rather than the higher rates most insurers pay in the marketplace and individual market. Beneficiaries would also be getting better provider networks.

That raises the larger question why the ACA marketplace was designed to leave insurers on their own to negotiate payment rates with doctors and hospitals, as they do in the employer market. Why not reproduce the payment structure that keeps Medicare Advantage plans paying Medicare rates or something very close to them? That possibility was never on the table, probably because healthcare providers would have been even more opposed than they were to a so-called public option.

* When Clinton first verbally expressed a willingness to consider a Medicare buy-in last spring, Avalere Health scoped out the potential market, but they did it for a wider age group, 50-64, as Clinton first mentioned 50 or 55 as a threshold. Avalere’s Caroline Pearson and Chris Sloan were kind enough to provide me with a breakout of their calculations for 55- to 64-year-olds. As it’s based on 2014 Census data, I have updated where possible, based on new Census data and enrollment statistics for the ACA marketplace published by HHS. The calculations are explained in more detail in this post.