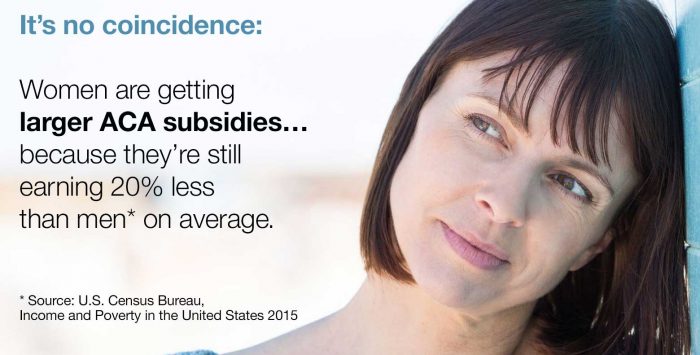 Southerners who bought health insurance through Obamacare’s health insurance exchanges have been receiving premium subsidies that dwarf those of consumers in other parts of the country. Not only that, but subsidies for women have been, on average, larger than the subsidies received by men.

Those were two of the most obvious disparities revealed this week as HealthSherpa released data gleaned from 530,000 policyholders that the online insurance broker has enrolled in Obamacare’s exchanges over three years.

HealthSherpa is a web broker, and Michelle Rider, Vice President of Marketing, confirmed that 100 percent of the people who used HealthSherpa are enrolled in plans through the federally facilitated exchange. Rider also notes that 85 percent of HealthSherpa’s enrollees have been eligible for premium subsidies, which is identical to the percentage of all HealthCare.gov enrollees who were eligible for premium subsidies during the 2016 open enrollment period.

I took a look at HealthSherpa’s findings and while the differences in subsidies based on geography and gender were eye opening, there are some obvious reasons we shouldn’t be that shocked.

Larger subsidies in the South 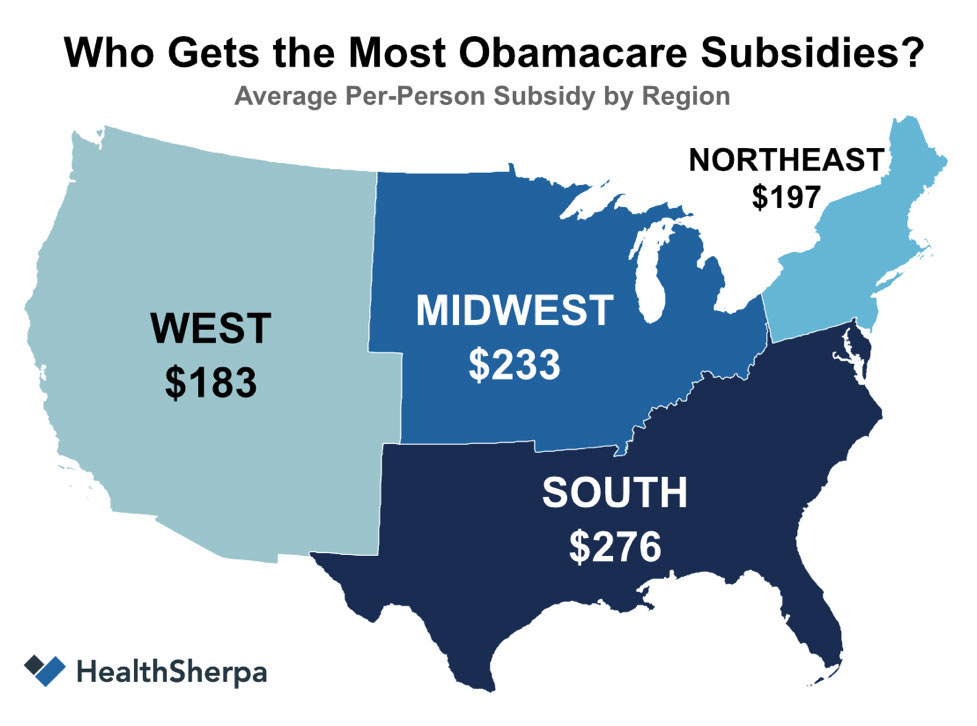 The ACA’s subsidies are based on leveling the cost of health insurance so that a Silver plan will cost roughly the same amount for people earning the same income. It’s meant to smooth out the differences that would otherwise occur based on geographical location and age. So if your household income is the same as someone else’s, you’ll both pay the same after-subsidy price for the second-lowest-cost Silver plan in the exchange, regardless of differences in the pre-subsidy price.

The subsidy amount will differ, in order to make the after-subsidy amount the same. (A good illustration of this is the Kaiser Family Foundation’s analysis of benchmark premium changes from 2015 to 2016 across a variety of cities; the after-subsidy premiums are virtually identical in every city, because the analysis was conducted assuming the enrollees were all earning $30,000 per year.)

But the subsidies result in lower after-subsidy premiums for people with lower household incomes, since the whole point is to have lower-income households pay a smaller percentage of their income for health insurance premiums. Since the South has a lower median household income, it makes sense that they have higher average subsidies than other areas of the country, and lower after-subsidy premiums.

It’s worth noting here that prior to 2014, women (up to about age 50 or 55) typically paid more than men in states that allowed gender-based health insurance pricing, despite the fact that virtually none of the policies covered maternity care. Fourteen states had banned or limited gender-based premiums by 2012, but the practice remained the norm in most of the country until the ACA ended it in 2014.

The ACA has removed gender from the rate-setting equation. That means that for the same policy, a man and woman of the same age will have the same pre-subsidy premium. But as HealthSherpa notes, women are more likely to pick Silver plans, while men are more likely to pick Bronze plans, which come with lower premiums. That explains why the average pre-subsidy rates are higher for women.

It should be noted here that if women were picking the same plans as men, the women would pay lower after-subsidy premiums, since their subsidies would still be larger based on their lower average incomes. 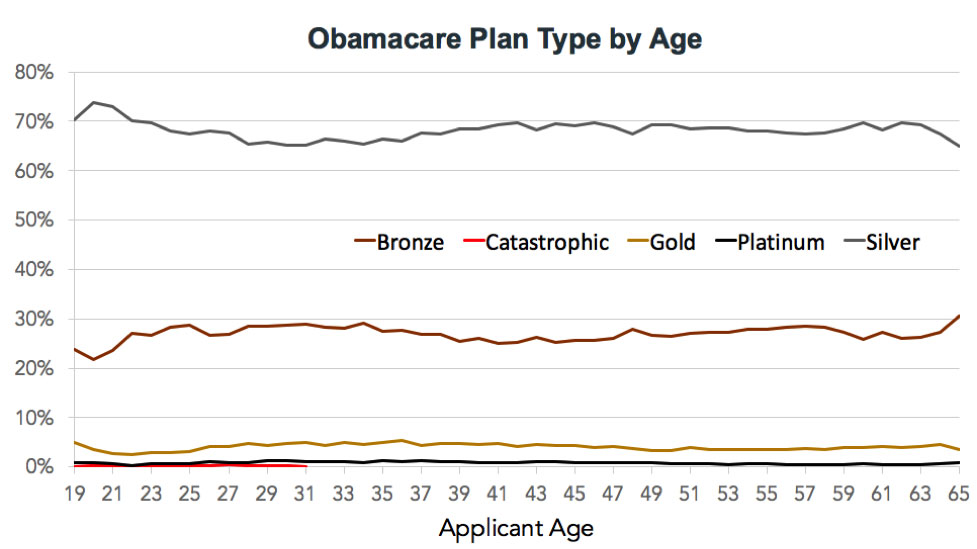 HealthSherpa’s analysis found that of the 500,000 people they’ve helped enroll in health insurance over the last three years, less than 0.1 percent have selected catastrophic plans. That’s fewer than 500 people, out of half a million. Across the entire Healthcare.gov platform, uptake of catastrophic plans has been a little more robust, but was still just 1 percent of all enrollments for 2016.

Why are catastrophic plans so unattractive to enrollees? Well, for starters, they’re only available to people who are under 30 (or older applicants who have a hardship exemption). That limits the enrollment pool significantly, since 63 percent of the people who enrolled in coverage for 2016 in the states that use Healthcare.gov were 35 or older.

And subsidies aren’t available for catastrophic plans. Since twenty-somethings tend to have lower average incomes than older workers, the burden of covering the full cost of a catastrophic plan is a heavy lift, particularly when compared with the alternative of subsidized Bronze and Silver plans.

If catastrophic plans were universally available across all age groups, and were subsidy-eligible, they would likely be attractive to the same segment of enrollees who currently pick Bronze plans, and to those who would prefer to save even more in premiums and would buy a “Copper” plan if it were available. But that’s not the case.

The lack of subsidies and the restriction on age mean that catastrophic plans really only appeal to relatively high-income (ie, not subsidy-eligible) twenty-somethings who don’t get health insurance coverage from an employer. And although catastrophic plans are available to older enrollees who have a hardship exemption from the ACA’s individual mandate, folks in that situation are also likely to find the full-price catastrophic plan premiums to be a heavy lift.

There’s a wealth of data in HealthSherpa’s analysis, and the results demonstrate that the ACA’s subsidies are working just as they were intended to: Subsidies are higher where incomes are lower, and after-subsidy premiums are linked to income as well as the robustness of the enrollee’s plan.