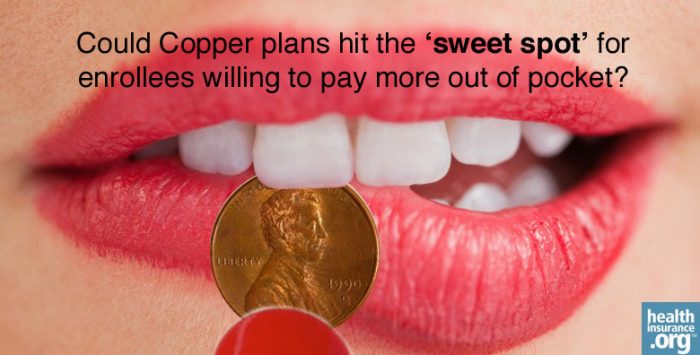 As we head into the second round of open enrollment, there has been discussion in congress and in the media regarding the possibility of adding Copper plans to the ACA-approved health insurance lineup in 2016. The Expanded Consumer Choice Act was introduced in the Senate nearly a year ago, and it hasn’t gone anywhere since. But it’s been revived in the news recently as people discuss the pros and cons of adding a lower cost, lower benefit health plan to the mix.

The deductibles on Copper plans would be higher than those of plans currently on the market. Larry Levitt, senior vice president at the Kaiser Family Foundation, estimates they would be in the range of $9,000 for an individual. (In 2015, the maximum allowable out-of-pocket for an ACA-compliant plan is $6,600 for an individual and $13,200 for a family).

According to an analysis by Avalere Health, premiums for Copper plans would be 18 percent lower than the average Bronze plan premium in 2016. Avalere also predicts that 350,000 additional people will join the ACA-compliant market if Copper plans are made available. Half of them have incomes over 400 percent of poverty, and will be paying the entire premium themselves regardless of what plan they choose. In addition, Avalere estimates that half of current enrollees who have Bronze plans would switch down to a Copper plan.

The discussion about Copper plans comes at the same time that nonprofits and advocacy organizations across the country are helping people understand that they still have to pay a portion of their medical bills, even with their new insurance. Especially among the previously uninsured, there is a significant knowledge gap about how insurance works.

Although there are concerns that people are purchasing coverage they don’t fully understand, most enrollees are not simply choosing the lowest-cost plan. During the first open enrollment period, only 20 percent of exchange applicants selected Bronze plans. 65 percent selected Silver plans, including the Silver plans that come with cost-sharing reductions for eligible enrollees.

Copper plans would have an actuarial value (AV) of 50 percent, meaning they would pay roughly half of the average enrollee’s medical expenses before the out-of-pocket maximum is met. But they would still have to cover the essential health benefits (EHBs) that are mandated by the ACA, and they would have caps on their out-of-pocket exposure. They would provide preventive care with no cost-sharing, and cover pre-existing conditions just the way other ACA-compliant plans do

Not everyone thinks this is a good idea. Wendell Potter refers to Copper plans as crappy coverage, and Sabrina Corlette, project director at Georgetown University’s Center on Health Insurance Reforms calls Copper plans “a false promise of affordability” because the out-of-pocket costs could leave consumers in the lurch if they end up getting sick.

The people who need them

For some consumers however, Copper plans could be just right. This is particularly true among healthy people who don’t qualify for subsidies and who currently have grandmothered plans that are up for renewal again this fall. In some cases – including my own family’s coverage – a big reason the old plans don’t meet the ACA’s criteria is that their out-of-pocket maximums are too high. Copper plans would have higher out-of-pocket maximums than the plans currently being sold, but beyond that, they would be solid coverage.

We all have different risk tolerance, different medical histories, and different levels of savings that we could access in the event of a significant medical claim. But the controversy around Copper plans accentuates the importance of providing user-friendly techniques for comparing plans from the four currently available metal levels. Our new eBook – The Insider’s Guide to Obamacare’s Open Enrollment – includes a section that walks you through the process of selecting a plan.

When open enrollment starts on November 15, take the time to compare the plans available to you, looking at premiums as well as the cost of a claim. Consider various claims – the high-dollar ones as well as the day-to-day sort. If you’re contemplating a high-deductible policy, know that they can be a great option for some people – but only if you’ve got a solid plan for how you’ll pay that deductible if the need arises.

One of the many benefits of the ACA is that you’re no longer stuck with a plan if a health problem arises. If you choose a Bronze plan for 2015 and then develop a chronic condition during the year, you can switch to a higher metal level during the 2016 open enrollment. Before the ACA, if you purchased a $10,000 deductible plan and then got cancer, you were stuck with that deductible for at least the next several years.

That’s no longer the case. So while it’s important to shop around, rest assured that open enrollment will come around again next fall.