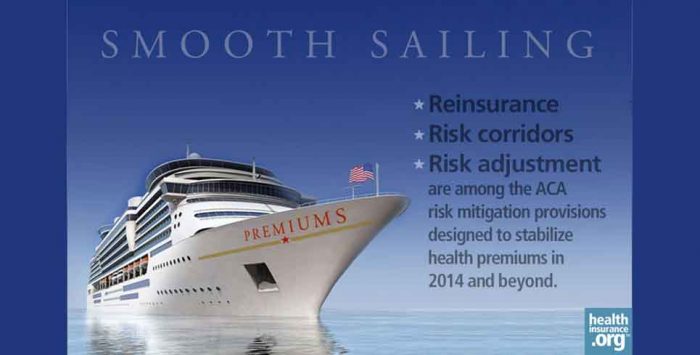 With the problematic rollout of the Affordable Care Act’s health insurance exchanges over the past few months, there has been some hand wringing in the media about whether or not the new health plans will be sustainable. ACA opponents are no doubt hoping that premiums will spiral out of control. Even supporters of the ACA have expressed concern that if the newly insured population ends up being smaller, older or sicker than projected, premiums could climb significantly in 2015.

As with much of the anecdotal accounts and media reports regarding the ACA, there may be some validity to the worries about the increased risk presented by the newly insured population in 2014, but there is also plenty of hyperbole and spin.

Sarah Kliff addressed the “death spiral” concerns in an excellent Washington Post article recently, noting that even if young adults end up being 25 percent less likely to enroll than older people, premiums would only have to increase by 1 percent to account for the resulting skewed demographic. But “death spiral” generates much more exciting headlines than 1 percent rate increases, and thus we hear more about the former.

There are multiple provisions built into the ACA to protect against rate shock and adverse selection, and to stabilize the new health insurance market (and several states have taken additional measures on their own). Carriers must use single state-wide risk pools for all of their individual or small-group insureds (in some states, those are further combined into one risk pool) to smooth out differences that might arise based on the health of the exchange-insured population vs. those insured outside the exchanges. And the individual mandate helps to ensure that risk is eventually spread over the largest possible population.

But there are other measures built into the law. Reinsurance, risk corridors and risk adjustment are additional ACA provisions specifically designed to stabilize new plans, especially in the individual market, which is most susceptible to destabilization.

Initially reinsurance was to kick in when a claim exceeded $60,000. But in late November, HHS proposed new guidelines that would lower the threshold to $45,000. Reinsurance pays 80 percent of the claim above that point, until total claims for that insured reach $250,000 for the plan year.

So for example, if an insurer pays a $200,000 claim for an insured, the insurer would receive $124,000 in reinsurance funds [($200,000-$45,000) x 0.8]. The lowered attachment point for the reinsurance program is an answer to the dilemma posed if the new pool of insureds is sicker than originally anticipated. The existence of this program is one reason we’re not likely to see spiraling premiums in 2015.

The HHS-run risk corridor program will serve to further stabilize the individual and small-group markets. It allows insurers to share in both losses and gains over the next three years. Each qualified health plan (including QHPs sold off-exchange that are substantially similar to QHPs sold in the exchange) will have a target amount set for claims costs, roughly equal to total premium revenue minus allowable administrative expenses.

If claims costs are less than 97 percent of the target amount, the insurer will remit a portion of the savings to HHS. The money will then be sent to insurers with claims costs that exceed 103 percent of the target amount. The risk corridor program helps to mitigate the uncertainty in insurers’ premium calculations for the new plans being sold in 2014, and will continue to provide market stabilization through 2016.

The third program, risk adjustment, is a permanent feature and applies to all non-grandfathered individual and small group plans, both in and out of the exchanges. Essentially, it transfers money from plans with lower risk enrollees to plans with higher risk enrollees. States can opt to have HHS run the risk adjustment program, submitting composite risk scores (i.e., no specific per-insured health information) to HHS.

The ACA’s “3R” risk mitigation program is just one more layer of stability in the law, adding to provisions like the individual mandate and unified risk pools. There will certainly be some hiccups in the early years of full ACA implementation. But there are integrated mechanisms embedded in the law that will ensure its long term success.

Doom and gloom reports about how the ACA will implode on itself are generally either ignoring the market stabilizing provisions altogether, or are uninformed as to how they will work.