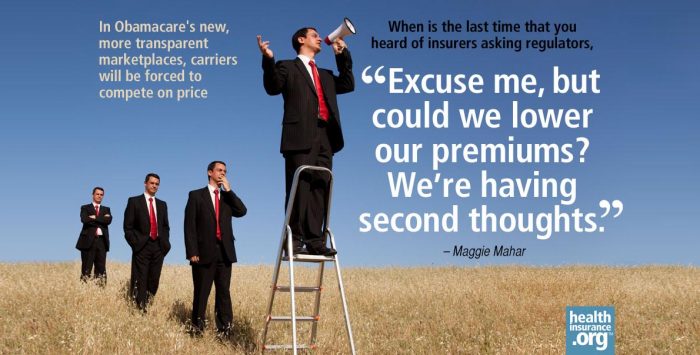 In just three weeks, Americans who don’t have employer-sponsored coverage will begin signing up to buy their own insurance in state marketplaces (a.k.a. “exchanges”) with names such as Covered Cal and Access Health CT. Meanwhile, small-business owners will be able to shop for policies to cover their employees in separate SHOP (Small Business Health Options Program) Exchanges.

In July, insurance regulators began publishing the rates that carriers have proposed. Within days, some insurers began to ask if they could file “do-overs” even before regulators had a chance to decide whether their prices were fair. (When is the last time that you heard of insurers asking regulators, “Excuse me, but could we lower our premiums? We’re having second thoughts.”)

What is going on here?

When insurance companies in Oregon, the District of Columbia and Connecticut saw their rivals’ prices, many realized that their premiums were too high. And they knew that if their rates were not competitive, they would lose market share – particularly among the young, generally healthy pool of 19-34 year olds that insurers hope to snag.

Forced to compete on price

In the new, more transparent marketplaces companies will be forced to compete on price.

In the past, it was hard for consumers to compare prices for the products offered by different carriers. Policies were crowded with fine print; each plan offered different benefits and exceptions. It was difficult to make apples-to-apples comparisons.

But under Obamacare, the policies sold in the exchanges will be standardized. All must cover the same 10 essential benefits, offer free preventive care, and cap how much anyone can be asked to pay out-of-pocket. In these ways, plans will be similar, making it much easier for exchange customers to compare prices.

Granted, some plans will try to distinguish themselves so that they can charge more. They may include “extra” benefits such as acupuncture, or discounts at a gym. Others will offer access to a broad network of providers that includes prestigious hospitals and pricey specialists who balk at the idea of giving an insurer a discount in order to be included in its network.

But roughly 50 percent will create “narrow networks.” They say that by targeting the most cost-effective providers, and negotiating lower reimbursements, they will be are able to slice premiums.

I suspect this will prove to be a shrewd strategy. Polls show that the young customers carriers covet are three times as likely to be willing to give up their choice of doctor for a lower health insurance premium.

How big are the cuts?

As insurers whack premiums, how big are the cuts?

In Washington D.C. after proposed rates were announced:

In Oregon, two issuers lowered their proposed individual market premiums within days of the state’s public release of 2014 premium information.

“That was my question when I saw the rates,” he explained. “Can we go in and re-file these? We’re going to try to get these to a competitive range.”

Going forward, we may hear less about insurers chopping premiums after proposed rates are announced. As carriers hear companies in other states admit that they “mis-calculated” they may quietly slice their own proposals.

For instance, Friday, when Minnesota became the 17th state to announce premiums , it revealed that individual coverage will be available for $91 monthly-before subsidies. Minnesota is offering the lowest average rates announced so far.

Why did insurers miscalculate?

Insurers say they were ‘too pessimistic.’ Why did they miscalculate?

As insurance company actuaries struggled to price new products for new customers in new marketplaces with new rules, they were “working in the dark,” amid much uncertainty about who will sign up for the exchanges – and how much medical care they will need.

The doomsters haven’t helped. Earlier this year they all but persuaded many carriers that “Young Invincibles” will shun the exchanges. Now, that myth has gone to the place where urban myths die. (As Wendell Potter explains the fiction was created by the insurance industry.)

Last month, the Commonwealth Fund’s “Tracking Survey of Young Adults” revealed that when employers offer 26- to 29- year-olds coverage, 79% say “Yes” while just 5 percent reply that they don’t need insurance. Many say they can’t afford it.

Today, we know that the vast majority of 19-34-year-olds shopping in the exchanges will qualify for generous subsidies that will make coverage affordable.