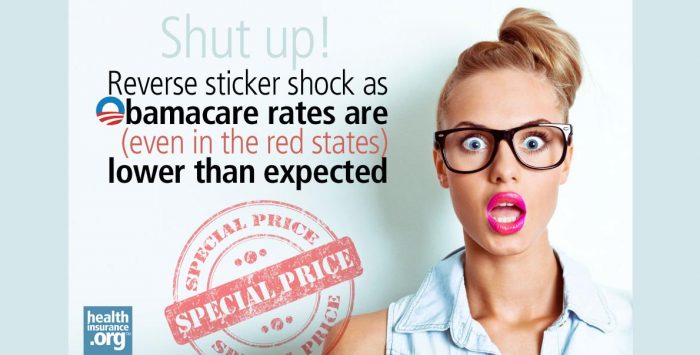 Yesterday, when I read the new HHS report on premiums in the individual exchanges in 36 states, I was impressed by the good news. In the marketplaces where people who do not have access to employer-sponsored insurance will be purchasing their own coverage, rates will be much lower than expected. This is true even in Red States that have resisted Obamacare.

For instance in Houston, Texas, a 27-year-old earning $25,000 would pay $81 monthly for the least expensive Bronze plan – after using his government subsidy – while a family of four with income of $50,000 would owe just $52. What we are seeing is “reverse sticker shock.”

Then I began to read what the press had to say about the report, and found myself frustrated by the misleading, fear-mongering response. It sometimes seems as if the mainstream media is bent on downplaying any good news about reform.

Was it wrong for HHS to focus on costs?

Even the New York Times – a highly-respected publication that is often viewed as “liberal” – took a dour view, warning that “the data” in the HHS report on premiums “provides only a partial picture of the reality that consumers will face … The figures, almost by definition, provide a favorable view of costs, highlighting the least expensive coverage in each state.”

What Times reporter Robert Pear overlooks is the fact that the vast majority of individuals shopping in the exchanges live in middle-income or low-income households. (More affluent Americans tend to have access to comprehensive insurance through their employer, a spouse or their parents.)

What folks purchasing their own coverage in the state marketplaces  want to know is what the least expensive Bronze and Silver Plans will cost. Those are the plans they will be buying, and that is why the HHS report focuses on those policies.

Pear goes on to stress how much premiums will vary – even within a given state – and how high they will be in some cities:  “… a 40-year-old buying the least expensive silver plan would pay $240 a month in Los Angeles, but $330 in Sacramento, about 38 percent more.”

True. But Pear doesn’t take into account the fact that most Americans shopping in the exchanges will be eligible for government subsidies. They won’t be paying $240 or $330 a month. Thanks to the government help, some 60-year-olds will have to pay nothing for insurance.

Indeed, after applying his subsidy, a 40-year-old living on $22,980 in either Los Angeles or Sacramento would pay only $120.65 a month for coverage. This is because the lawmakers who wrote the Affordable Care Act believed that someone earning $22,908 should not be expected to spend more than 6.3 percent of his income on insurance. As the table in this post shows, the IRS will calculate tax credits to make up the difference between the percentage of income that someone is expected to contribute and the “sticker price” on a Silver plan.

Forbes columnist Avik Roy also ignores subsidies when writing about the HHS report. This allows him to claim that the newly announced rates will force individuals buying their own coverage to shell out 99 percent more than they are paying today.

Moreover, when Roy compares today’s rates to the premiums that individuals purchasing their own insurance will pay next year, he overlooks the fact that many of the plans now sold in the individual market are “bare-bones” plans. Most don’t cover maternity benefits. Some don’t pay for chemotherapy. Many carry huge deductibles. When he compares the policies that will be sold in the exchanges to these plans, Roy is not making an apples-to-apples comparison. He is comparing apples to rotten apples.

Meanwhile, Pear appeals to his readers’ worst fears by cautioning that, according to “consumer advocates … people shopping for health insurance should consider not only price, but also other factors like the list of covered drugs and the doctors and hospitals available in a health plan.”

Not long ago, the Times reported on the dangers of insurance plans with “narrow networks” that may not cover the doctors and hospitals that a patient knows best. The truth is that most of the currently uninsured and underinsured Americans who will be shopping in the Exchanges don’t have a list of favorite specialists. Many don’t have a doctor; when they receive care, they are treated in an ER or a community clinic.

Polls also show that the young Americans who will be flooding the exchanges are three times as likely to be willing to give up their choice of doctor for a lower premium.

Insurers are holding down premiums by excluding marquee healthcare providers who charge more than others for the even the simplest procedures. The Times has suggested that, in “narrow networks,” patients with “complex conditions” may not be able to get the care they need.

In fact, the Obama administration addressed that problem last year, issuing a “rule” that ensures that networks will not be too narrow. In order to win state and federal approval insurers will have to show that their network includes “a sufficient number and type of providers.”

Meanwhile, study after study shows that there is little correlation between what a health care provider charges an insurer and the quality of care provided. Pricing is all about market clout. Some hospitals charge more “because they can.”

But Americans can no longer to afford to pay exorbitant prices for brand healthcare. HMOs that charge less if the patient stays “in network” fell out of favor in the 1990s, but today they’ve become increasingly popular. Indeed when Consumer Reports ranks insurers, HMOs that rely on a network of providers to coordinate patient care receive the highest rates both for quality of care and consumer satisfaction.  Networks represent the future of American medicine – and not just in the exchanges.