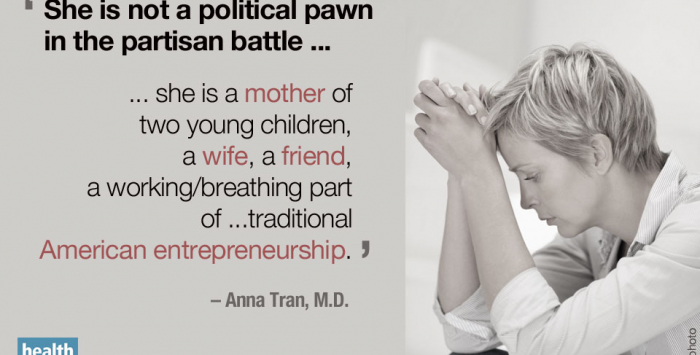 While Sen. Ted Cruz (R-Tex) is pushing myths about the historic first step to better access of healthcare for Americans, my friend has been diagnosed with advanced lymphoma at the young age of 45. She and I have a longstanding mutual respect, even as we debated the current healthcare changes.  Prior to her diagnosis, she was a conservative and a harsh critic of Obamacare and remained steadfast in her views despite every data I presented.

She and her husband have a small business and allocate money towards their children’s education rather than pay the expensive premiums in the private market place.

She talked about the infringement of freedom, assumed the ACA accelerated premium increases, and lamented the added costs to a small business. The truth is that her business would be exempt from a penalty as it has fewer than 50 employees. And contrary to the misinformation, the ACA is not the cause of the continued increase in premiums, which has gone unchecked for decades since the healthcare industry was given antitrust protection in 1944.

For providing coverage for her employees, she would be eligible for a tax deduction. She could also get insurance through the small-business exchange but coverage doesn’t begin until January 2014. In the meantime, she and many others are in a desperate state of limbo, searching for the time-sensitive treatments that could dictate a good or bad prognosis of their catastrophic illnesses.

She lives in an upper middle-class suburb, which has no safety net hospital. She can’t get care at the large, indigent hospital as she is not a resident of its metroplex. She doesn’t qualify for charity chemotherapy because her family income is above the poverty line.

She can hope to get Medicaid or disability, which sometimes entails several months, during which her disease will definitely progress. Or she may possibly be admitted to a clinical trial at an out-of-town cancer center, which would entail costs of travel and housing and time away from her family.

The liberal may gloat and say that she deserves this. The real conservative may say she should have assumed more individual responsibility for her health.

No, I don’t take delight in this situation. I don’t feel vindicated. I feel extremely sad that those spinning the crazy lies to hinder the ACA don’t care how she and her family will suffer, as long as they have bragging rights on their ideology and accumulate political power and notoriety.

She is not just a potential statistic in the estimated tens of thousands of deaths annually due to lack of access. She is not a political pawn in the partisan battle. She is a mother of two young children, a wife, a friend, a working and breathing part of what remains the integral but fading fabric of traditional American entrepreneurship.

And she is a victim for believing in an ideology which on the surface seems honorable and sincere, but when its layers are stripped to its core, is a heartless attempt to keep people from healthcare that everyone needs. Yes, healthcare is a universal and moral right. There, I said it. And no, that doesn’t make me a liberal, or a bleeding heart, or an idealist, as some of my hardened fellow doctors say.

If we put down our partisan viewfinders, we will see that it is possible and has been achieved in other developed countries and in our own country under a GOP governor in Massachusetts. It is possible and it is imperative.