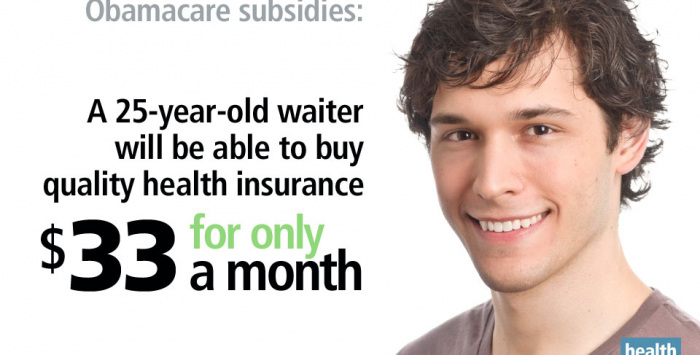 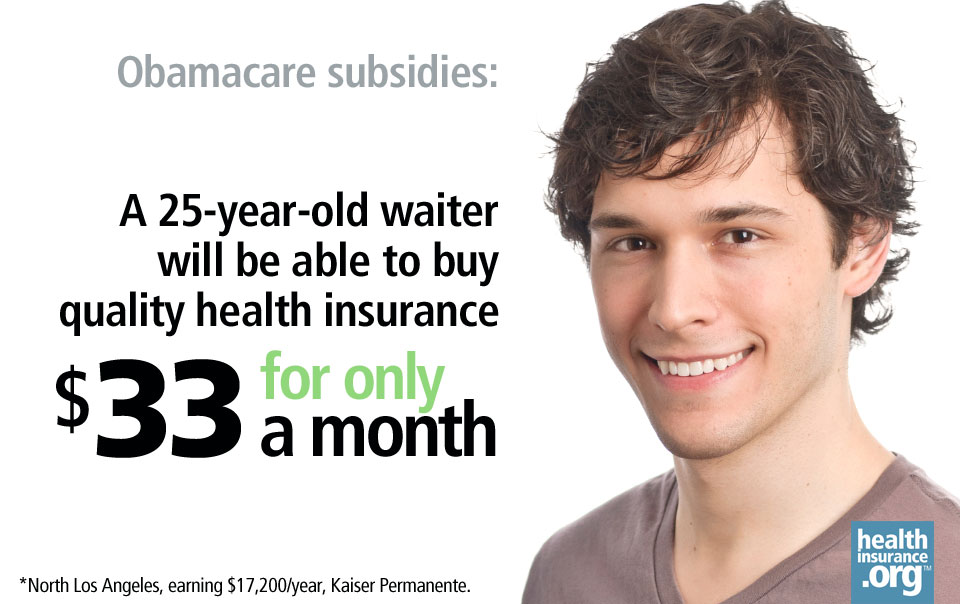 If your son (or boyfriend) is uninsured, send him this post

Some young men say they never go to the doctor. Why, they ask, should they buy into Obamacare?

Obamacare saboteurs are urging them to boycott the state marketplaces (a.k.a. the exchanges) where people who don’t have health benefits at work will be able to buy their own insurance.

What reform’s opponent don’t tell them is that under Obamacare, a 25-year-old waiter who lives in North Los Angeles and earns $17,200 a year will be able to purchase coverage from one of the state’s highest-rated insurers, Kaiser Permanente,  for just $33 a month.

How can this be? One word: subsidies.

Next year, some 11 million young adults (18-34) who are now either uninsured or buying their own (usually bare-bones) insurance will be able to purchase excellent coverage in the exchanges. Since some 9 million of the 11 million earn less than $45,960 a year ($62,040 for a couple) they will be eligible for tax credits to help cover the premiums. Fully 96 percent of the youngest (21-27) will qualify for subsidies, says Linda Blumberg, a health policy analyst at the bipartisan Urban Institute.

Now that states have begun to announce the rates insurers will be charging in their marketplaces, we can move past speculation to discuss what young adults in particular cities actually will be paying, after applying those tax credits. Fear-mongers should blush.

Why Bronze plans will be popular

The example of a 25-year-old waiter in North L.A. buying coverage for just $33 a month assumes that he purchases Kaiser Permanente’s Bronze plan. As you may remember, the exchanges will offer four tiers of insurance: Platinum, Gold, Silver and Bronze. Plans in all four tiers will offer free preventive care and comprehensive coverage that includes the 10 essential benefits.

In the exchanges, young adults under 30 also will be able to purchase high-deductible health plans (HDHPs). Often these catastrophic plans will be cheaper than Bronze plans. But subsidies cannot be used to buy them. Thus, HDHPs make sense only for relatively affluent young singles who earn over $45,960 and thus won’t qualify for tax credits. But most in this group already are covered – either by a parent’s plan or by their employer. In 2013, 91 percent were insured. They won’t be shopping in the exchanges.

The subsidies are designed to make a Silver plan affordable.

Here’s how they work: the government begins by looking at your income. As the table below reveals, the lawmakers who wrote the Affordable Care Act decided that a waiter who earns less than $17,235 (or 150 percent of the Federal Poverty Level) should not be expected to spend more than 4 percent of his income ($689) when purchasing health insurance in the exchanges.

When calculating the tax credit, the IRS will make up the difference between the amount you are expected to contribute and the cost of the “benchmark” Silver plan where you live. (In every marketplace the “benchmark” is the second least expensive Silver plan. In North L.A., it is a Blue Shield PPO which carries a price tag of $2,376 a year.)

But he doesn’t have to use the $1,688 to buy Silver coverage. He can apply his subsidy to any Platinum, Gold, Silver or Bronze plan sold in the exchange. The Bronze plans call for higher out-of pocket spending, but since he rarely visits a doctor, he’s not worried about co-pays and deductibles. The premium is most important. Moreover, in North LA,  Kaiser Permanente offers a Bronze plan for just $174 a month $2,088 annually). After he uses his tax credit, it will cost him $33 a month, or $400 a year.

Bronze will be popular among 20-somethings, but it won’t be the best choice for all young adults. If he suffered from a chronic condition like asthma, and knew he might land in a hospital or an ER, he would be better off picking Silver coverage because Silver plans come with a silver lining: Anyone who earns less than $45,960 is eligible for a “cost-sharing subsidy” that will slash both his co-pays and his deductible. (This subsidy should not be confused with the separate “premium tax credit” that helps cover his premium.) For a full description of how the cost-sharing subsidy works see this “Frequently Asked Question”.

Bronze premiums around the U.S.

Nationwide, young adults using subsidies will be surprised by just how affordable insurance can be. In fact, some plans will cost less than the $695 penalty a Refusenik will owe in 2016.

Note that in this last example, for $948 a year, our “bro” would receive free preventive care, comprehensive insurance that covers all essential benefits, and three physicians visits for $45 before his deductible kicks in. Plus, his mother and his girlfriend would stop nagging him about not having insurance.

What would you do?