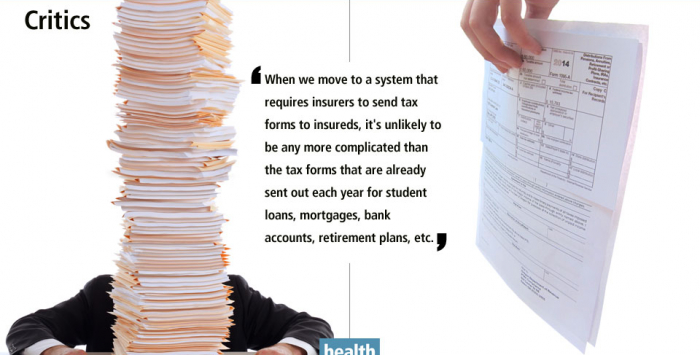 A recent Forbes article written by Evan Albright details the “nightmare” of IRS regulations and tax compliance issues that the ACA will bring in the coming years.

Albright describes his encounter with a Massachusetts-based CPA who notes that the increased tax reporting requirements amount to job security for accountants, but that he “[doesn’t] think it’s fair.”

Albright explains that when Massachusetts implemented its own health care reform in 2006, the 1099-HC tax document that insurers had to provide to insureds was cumbersome and often disregarded by recipients who were unaware of its importance. But he also notes that Massachusetts has improved the system over the years.

A 2012 version of the 1099-HC appears to be one of the most simple tax documents you’ll ever see – definitely no more complicated than a standard W-2 or 1099.

Massachusetts has provided a model for health care reform since the early days of federal discussion on the issue, and it’s fairly safe to assume that the lessons learned about simplifying the health insurance tax issues will be applied on a national level too. Initial reporting on W-2s has already begun, simply by adding another number to W-2s.

When we move to a system that requires insurers to send tax forms to insureds, it’s unlikely to be any more complicated than the tax forms that are already sent out each year for student loans, mortgages, bank accounts, retirement plans, etc.

Critics worried about ACA, but not HSAs?

Although the ACA will bring some additional tax paperwork, opponents who cry foul tend to be much less annoyed by Health Savings Accounts, even though HSAs also come with increased tax paperwork. HSAs are a perennial favorite of health care reform conservatives, and they’ve been well received with insureds over the last several years.

Twelve million Americans have HSAs, and despite the extra tax paperwork that goes along with using an HSA, the popularity of HSAs continues to grow. Insureds who have an HSA-qualified high deductible health plan (HDHP) are eligible to open an HSA; in 2013 they may contribute up to $3,250 for an individual or $6,450 for a family.

IRS form 8889 is used to report this information and to calculate the HSA deduction that can be taken on the 1040. Although the form is two pages, it’s probably barely noticed by most people with HSAs when they file their taxes, because the number of people who do their taxes manually was down to 8.7 percent of filers (and falling) in 2012.

Almost everyone already uses either tax software (which makes reporting things like HSA contributions very simple) or a tax professional. For filers who use tax software, the entire HSA reporting process takes about five minutes. The addition of one or two more ACA-related forms isn’t likely to make a big difference, since the trend is already towards using tax software or a professional.

What new paperwork will you actually see?

Although the final details have not been released by the IRS (see question 24 of this IRS Q&A), the general consensus is that insurance companies will be sending a tax form to insureds, and exchanges will be sending a separate tax form (1095-A) to enrollees who receive a subsidy to help pay for coverage.

These forms will be similar to W-2s and 1099s: Copies will be sent to insureds and the IRS, and the data on them will have to be reported when people file their taxes.

So most people will be receiving one or two additional tax forms in the mail starting in January 2015, and there will likely be one additional reporting form that will be used during the tax filing process. Although this results in a small amount of additional work at tax time, it’s a small price to pay for the benefits that the ACA provides, including subsidies to help millions of Americans pay for health insurance, and guaranteed issue policies in the individual market.

So why is there so much fuss being made about tax reporting and IRS regulations for the ACA, when those same people tend to love HSAs, despite the additional tax reporting that goes along with them? Perhaps it’s because the bulk of the financial benefits from the ACA will be realized by households with low- and mid-level incomes.

To some conservative-leaning folks, that seems like “Socialism.”  And yet they tend to view HSAs, which are disproportionately beneficial to higher-income households that can afford to fund them, as fair and an excellent health care reform strategy.

In considering the tax implications of the ACA, one issue that does need to be addressed is that subsidy amounts are based on prior year income, and if recipients end up earning more than anticipated, they could have to pay back some or all of the subsidy.

Although the ACA does introduce some additional tax reporting and regulations, the financial benefit to low and middle-income families from the exchange subsidies – and becoming insured if they have previously been uninsured – will far outweigh the small amount of extra work at tax time.