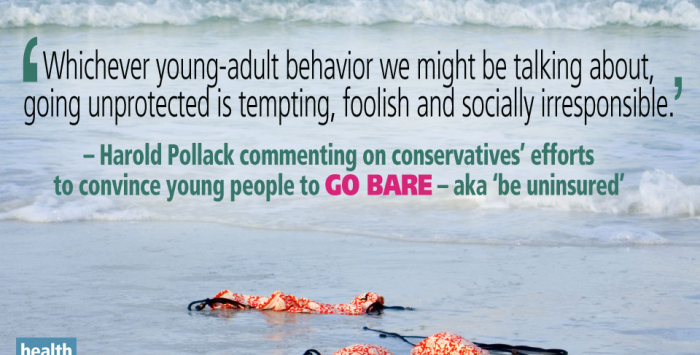 @mfcannon: Going bare not risk-free but more rational than u suggest.

This is from a series of tweets this morning by the Cato Institute’s Michael F. Cannon regarding the calculated risks of going uninsured.

Michael’s a cordial guy. But let’s just say that advice to “young invincibles” about “going bare” is a singularly unfortunate metaphor for those of us in public health, (or, for that matter, those of us with teenage kids).

Whichever young-adult behavior we might be talking about, going unprotected is tempting, foolish and socially irresponsible.

As my Incidental Economist colleague Adrianna McIntyre makes clear in an excellent post, the risks of going uninsured are greater than young people believe – and will remain so after the individual mandate and other main pillars of the Affordable Care Act begin to kick in.

Adrianna underscored the argument with a fair argument:

People pushing young adults to skip the exchanges aren’t saying, “Don’t enroll now… but hey, if you get sick in a few months, we’ll understand if you have a change of heart.” They’re saying, “Don’t enroll now; pay the penalty instead. And if you fall ill, or become pregnant, or get stabbed while doing a good deed and you can’t buy a plan, well, them’s the breaks. That’s the gamble we asked of you.”

Michael cheerily responded over Twitter: “EMTALA covers stabbings. FYI.” (He’s referring to the 1986 Emergency Medical Treatment & Labor Act, which ensures access to emergency room care.) I really wonder if Michael clicked through to the actual news story Adrianna referenced, which provides one illustration of why the argument “You can always get free emergency care” is dangerous and misguided.

Sure, you’re entitled to receive needed emergency care. The hospital is also entitled to send you a whopping bill. And much of the care you will need after a serious injury like that doesn’t fall under EMTALA at all. If you doubt that, I welcome you to enjoy the hospitality of my own great city’s emergency departments, and then to enjoy the hospitality of our county courthouse, scene of some heartrending proceedings highlighted in Jonathan Cohn’s terrific book Sick.

Adrianna referred to a specific Huffington Post story by Arthur Delaney and Dave Jamieson about a DC bartender named Mike Boone. Boone’s occupation and his personal health history – he had broken his back in 1993 – made him precisely the kind of person likely to be offered high premiums or to be shunned in the individual and small-group insurance market. Boone earns about $15,000 per year. I don’t know, but he may also have chosen to just take a calculated risk on forgoing health coverage.

Sure enough, he was uninsured the night he was stabbed after coming to the aid of a young mugging victim. Also sure enough, he received proper care at the emergency room. He needed four days in the hospital and two surgeries, running up $60,000 in medical bills.

Boone may be luckier than most. Well-wishers donated tens of thousands of dollars for his care after about his heroism. He received more money from a fund for crime victims. Even so, he expects to be in serious debt. Imagine what would have happened if he had been similarly injured in a bicycle or automobile accident that never made the papers.

Boone is precisely the kind of person who would have greatly benefitted from coverage that will soon be available to people like him for free or virtually so under the Affordable Care Act. Next year, people with his income would either be eligible for Medicaid, or would be eligible for virtually free coverage in the new health insurance exchanges.

FreedomWorks, among other conservative organizations, is mounting a cynical campaign to undermine the Affordable Care Act by encouraging young healthy adults to “burn their [nonexistent] Obamacare draft cards.” Telling young adults to “skip the exchange, pay the fine,” their apparent goal is to strangle Obamacare in its crib by worsening the risk pool in the new health insurance exchanges.

I expect this insurgent effort to fail, but it may succeed in raising premiums and costs. It will also expose many young adults to substantial risks, when they have access to several options offering highly subsidized coverage, not to mention low-cost catastrophic plans especially designed for people under the age of 30.

Adrianna offers several reasons why “going bare’ is a bad bet. Indeed it’s a worse bet than many young adults realize. Going uninsured allows people an immediate reward: Saving some money and avoiding some hassle. The long-term costs and risks are less tangible, but they are there.

Going uninsured is also socially irresponsible. If you “go bare” and get sick or injured, this puts your parents, friends, and siblings in a terrible position. It has a huge impact on our systems of care. As thirty distinguished health economists put things in this space, “A healthy individual’s decision to forego affordable insurance coverage thus imposes real costs on others, while raising premiums on many people with serious medical needs who require the most help.”

We all have a responsibility to protect ourselves and to protect the people we love. In health reform, that’s the principle of social insurance. Michael’s tweet was wrong on multiple counts. The double-entendre seems fairly instructive, too.