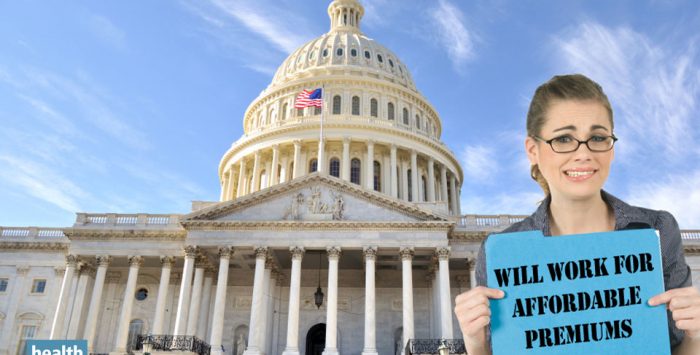 The U.S. Office of Personnel Management announced recently that Congress and their staff will be able to keep their federal health insurance subsidies once they begin purchasing coverage in the ACA-created exchanges.

Avik Roy explained the details well, but his closing arguments are questionable. Roy likes the ACA’s Grassley Amendment, which requires Congress and their staff to buy health insurance in the exchanges, because “it will give the people writing our laws some insight into the health-care system they have foisted upon the rest of us.” But he’s concerned that the subsidies “will partially insulate them from the degree to which Obamacare drives up the cost of individually-purchased health insurance.”

This sort of rhetoric is likely to resonate with people who aren’t familiar with the specifics of the ACA or the exchanges, and it could be a rallying point similar to Speaker Boehner’s attempts to compare the individual and employer mandates earlier this summer. But that doesn’t mean that it makes any real sense.

For starters, it’s a stretch to say that the exchanges have been “foisted upon the rest of us.” The majority of Americans get their health insurance from an employer (44.5 percent of the total population) or the government (25.6 percent, via programs like Medicare and Medicaid). That’s 70 percent of the population, and they are not the people who are expected to be purchasing individual policies in the exchanges.

Insulating enrollees from higher rates is the point

Although the ACA addresses numerous problems in our healthcare system, two of the most important are the large number of people who are uninsured, and the difficulties that people have in obtaining individual health insurance if they have pre-existing conditions. 16.9 percent of the population is uninsured, and roughly 10 percent of Americans have individual health insurance. The exchanges were created primarily to serve these two groups (in addition to small businesses, but those policies are already guaranteed issue, so they won’t experience the type of premium increase that Roy is addressing).

As for the subsidies insulating Congress and their staff from the impact of the ACA on premiums in the individual market, that’s a valid point. But it’s also true of the majority of people who will be purchasing health insurance in the exchanges. Premiums will likely be higher in 2014 for people who buy their own health insurance, won’t qualify for any subsidies, and are healthy enough to obtain a current policy with no underwriting rate increases. But most people aren’t in that category. Subsidies will absolutely insulate people from the impact on rates that occurs when policies become guaranteed issue. That’s why the subsidies are there.

Roy believes that IRS and HHS employees should also have to join the exchanges, which is a bit of a head scratcher. Why would we want a very large employer to drop its health plan and shift its workers to the exchanges? If that’s the case, should we also be asking everyone who works for Apple and Google to abandon their group coverage in favor of individual policies in the exchanges? The exchanges were designed to help people who are uninsured and people who buy their own individual health insurance. They were never meant to be a substitute for large group health insurance.

The federal government covers its employees with the Federal Employee Health Benefits Program (FEHBP). Like most very large employers, they give employees a wide range of options, and cover a large portion of the premiums. If OPM had not allowed Congress and staffers to continue to receive these subsidies, it’s likely that some of the higher paid employees (those who wouldn’t qualify for tax subsidies in the exchanges) might have opted to work somewhere else. Almost all extremely large employers (the federal government employs 2.8 million people) offer health insurance and subsidize a large part of the premiums. Not doing so would be a hiring and retention disadvantage for Congressional offices.

Having Congress and their staffers leave the FEHBP and enroll in the exchanges never really made sense in the first place, since they aren’t the demographic that the exchanges were created to help. But given that the Grassley Amendment is part of the ACA, OPM’s decision makes sense from a human resources perspective. The subsidies will help mitigate higher premiums, just as tax subsidies will for most other people in the exchanges. And the majority of Americans will continue to get their health insurance outside of the individual market.