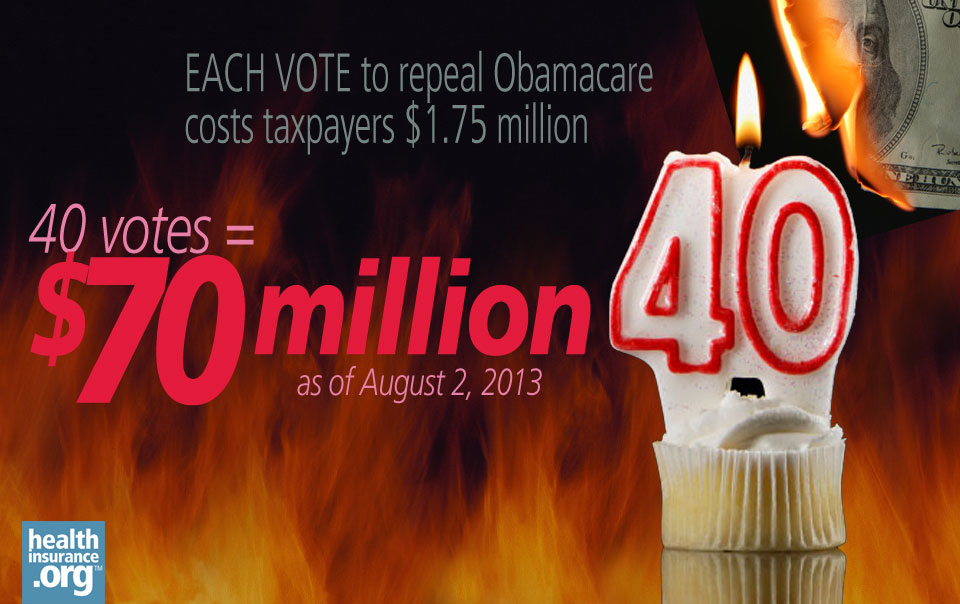 On what is always one of the busiest days of the year for members of Congress – the day before they begin their August recess – the House of Representatives is wasting time and taxpayers’ money by voting yet again today to repeal – you guessed it – ObamaCare.

It’s a waste of time and money because everybody in Washington knows this 40th repeal effort won’t be any more successful than the previous 39.

Folks, there’s not a snowball’s chance that the creatively named “Keep the IRS Off Your Health Care Act of 2013” will get anywhere close to President Obama’s desk. And even if hell does surprise us all by freezing over today and the bill somehow did make it through both the House and Senate, you can rest assured Obama would veto it the second it arrived at 1600 Pennsylvania Avenue.

While not an outright repeal like some of the previous bills the Republican-controlled House has approved, the “Keep the IRS Off Your Health Care Act,” sponsored by Rep. Tom Price (R-Ga.) would nevertheless derail ObamaCare by prohibiting the tax-collecting agency from playing any role in implementing the reform law.

Because millions of low- and middle-income Americans will be eligible beginning next year for tax credits to help them pay their health insurance premiums, the IRS will play a significant role in making the law work. Price and many of his colleagues have made it abundantly clear they don’t want it to work – and will do whatever they can to make sure it doesn’t work – and if depriving their constituents of the ability to be able to afford coverage is the price to pay for gutting ObamaCare, so be it.

But Price is not going to succeed. He is on a fool’s errand.

So the logical question to ask is, why? Why have we now had 40 votes to keep a law that was passed more than three years ago from being fully implemented?

Here are three reasons, in no particular order.

There you have it, the 40th repeal vote explained. Keep in mind that if Obama were a Republican, Democrats very possibly would be doing what the GOPers are doing today in what has become a hyper-partisan Washington. It hasn’t always been this way, it doesn’t have to be this way, but it’s the way it is right now.