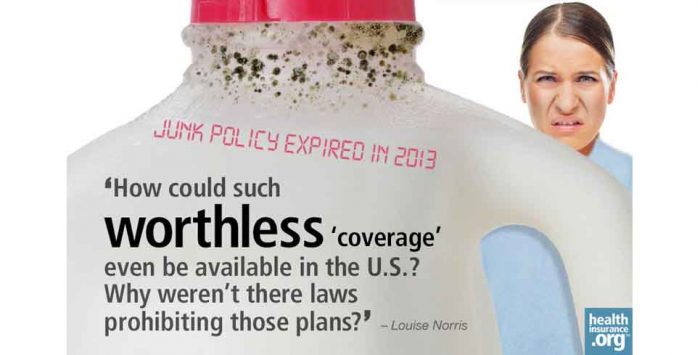 Before the ACA was created, there were periodic news reports about health insurance horror stories. They usually centered around limited benefit plans, mini-meds offered to minimum-wage employees, discount medical plans (not technically insurance, but the people who bought them didn’t always know that), and individual policies with more holes than a piece of Swiss cheese.

In the pre-2014 individual health insurance market, the plan options ran the gamut from great to horrible. Without a good pair of reading glasses or a trusted broker, it was often tough to decipher whether you were getting a solid policy or a junk one.

Those news reports were usually met with collective outrage. How could such worthless “coverage” even be available in the U.S.? Why weren’t there laws prohibiting those plans?

And yet now, we treat the cancellation of substandard plans as a scandal instead. It’s true that there’s a grey area. Anytime that you draw a line in the sand, there will be people just under the line who say that the line should be a little lower. In some cases, the old policies were good quality but the shift to guaranteed issue coverage resulted in a new plan design. But in other cases, the insureds believed that they had good coverage (and are upset that it’s going away) only because they’ve never had to use the policy for a major claim.

Dianne Barrette’s story was widely covered in the media after she found out that her $54/month policy was getting cancelled and a new one would cost ten times as much. (Red flag alert: Before the ACA’s subsidies, there was no such thing as good individual health insurance for a 56-year-old for $54 a month. Prices like that disappeared a generation ago.) As it turns out, Barrette’s policy would have paid $50 towards doctor visits and some limited preventive care, but otherwise covered almost nothing.

Barrette’s income makes her eligible for a sizable subsidy on a 2014 plan, bringing the cost of real health insurance down to the $100-$240/month range. The 2014 plans are better quality than even the non-junk plans that were being sold in 2012. And yet someone like Barrette, earning $30,000 a year, will pay less in 2014 than she would have for a real health insurance plan in 2012, even though the new policy is better.

Rainy Knight, a substitute teacher with a “limited income,” can just barely afford her $279/month, $10,000 deductible health insurance policy. Knight says “If I apply [for an exchange plan], they’re going to charge me even more money.” Her story was reprinted in numerous media outlets without any additional clarification, and we’re left wondering where she got the idea that she’d pay more for a new policy.

The average substitute teacher in Washington makes $100/day. Even if Knight subs five days a week for the entire school year, her yearly pay at that rate would be $18,000. Based on that income and the retail price of plans available to her, she would qualify for a subsidy that would pay more than 90 percent of the price of a Silver plan in the Washington exchange.

Her portion? About $65 a month. Hopefully, someone filled her in on the details. Even though she qualifies for Medicare in July, she could save herself more than $200/month for the first half of this year by switching to a new plan and getting a subsidy. A new plan would also provide better coverage, limiting her total out of pocket (not just the deductible) to no more than $6,350.

The holes in junk health policies

Insureds who extended their old plan into 2014, and those who are upset that their existing plan was cancelled, are sometimes surprised to learn exactly what was not covered by their old plan.

Nearly one out of five individual plans did not cover prescription drugs prior to 2014. And some of the plans that did cover prescriptions did so only for generics. In Washington, the state Insurance Commissioner had to issue an emergency rule banning generic-only coverage two years ago, when a major carrier had switched to generic-only benefits and the two other main carriers in the state were about to follow suit.

Generic-only prescription coverage is simply not the safety net that health insurance is supposed to provide. Only about half of brand name drugs have a generic equivalent, so there are plenty of medications that are not covered at all if you have generic-only benefits.

Only 34 percent of individual plans covered maternity prior to 2014 (clustered mainly in states where maternity mandates were already in place: California, Colorado, Massachusetts, Montana, New Jersey, New York, Oregon, Vermont and Washington). Sixty-one percent of individual plans covered mental health care, and 54 percent covered substance abuse treatment. And these numbers include plans that only provided limited benefits in those areas.

Not counted in these numbers are discount plans, specific disease plans (policies that pay if and only if you get cancer, for example), and association benefit plans that aren’t technically insurance. In theory, these policies aren’t meant to serve as a person’s only coverage. But in reality, they often do, and their members are not always aware of the fact that they don’t actually have real health insurance.

Before the ACA was written, numerous states had enacted legislation relating to medical discount cards, but in most cases, the regulations did not prohibit their sale. Limited-benefit association health plans are notorious for providing benefits that fall far short of being health insurance. But a professional association’s endorsement of a very limited plan can lend it an air of credibility, and policy holders might only find out when they’re in need of significant medical care that their coverage isn’t worth much.

If you opted to extend your 2013 plan into this year, be sure you’ve made your decision based on facts. There are plenty of free quote resource tools that you can use to see what’s now available in the individual health insurance market. And open enrollment continues until the end of March, so there’s plenty of time to see exactly how a new plan would compare with what you have, both in terms of price (including any available subsidies) and coverage.

Now that the Affordable Care Act has taken effect, you might be wondering whether you can still purchase “junk policies.” The short answer is that all plans that are considered individual major medical have to comply with the rules of the ACA, regardless of whether they are sold on or off exchange.  So for example, there are no new major medical plans that don’t cover prescriptions or maternity or impose lifetime maximums.

However, you can still find plans outside the exchange that don’t meet the standards enforced by the health reform law. You can still purchase discount plans in most states and limited benefit plans – including those endorsed by an association – and still purchase supplemental and illness-specific plans. Basically, policies that note that they are not major medical insurance can still be purchased in most areas.

But people who try to have only those plans on their own would be subject to the individual mandate penalty, as those policies are not considered minimum essential coverage.  (In the past, there was nothing stopping a person from having only an accident supplement policy, for example.)  Those types of policies were never intended to be stand-alone coverage, and with the penalty in place, it’s less likely that they’ll end up being purchased as stand-alone coverage going forward.