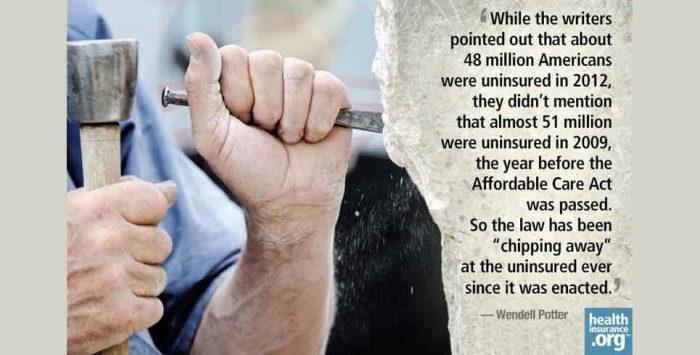 The Wall Street Journal on Saturday took a decidedly “glass is half full” approach to reporting some survey data of new health insurance marketplace enrollees.

Under the headline, “Exchanges See Little Progress on Uninsured,” the Journal article suggested that supporters of the Affordable Care Act would likely be surprised and disappointed that more than half of the 2.2 million who signed up for coverage through the state and federal marketplaces between Oct. 1 and Dec. 28 of last year already had insurance.

The survey data didn’t surprise me, however. What surprised me was that the Journal reporters apparently were surprised.

Before people were able to enroll in policies through the exchanges, approximately 15 million Americans bought coverage on the individual market directly from insurance companies. Many of them were low- to middle-income people who worked for small employers that didn’t offer subsidized coverage, worked for themselves or were unemployed.

In all cases, they had to pay the full amount of the premiums without help from an employer or from the government.

That changed when they were able to shop for coverage on the exchanges beginning last October. For the first time, many if not most of those 15 million people were able to get better policies at a lower cost because of the tax credits available to most of them, but only if they bought coverage through the new marketplaces. They would not get the tax credits – which lower their monthly premiums – if they continued to buy coverage directly from an insurer.

The bigger surprise – to me at least – would have been if we were not seeing that many of them are now getting their coverage through the marketplaces.

… even to the WSJ

If you made it all the way down to the 21st paragraph of the Journal story, you saw that the Journal reporters actually weren’t all that surprised either.

“It isn’t surprising,” they wrote, “that some percent of new purchasers of private health insurance are people who had insurance before.”

They went on to quote Larry Levitt, senior vice president at the Kaiser Family Foundation, which the Journal asked to analyze the federal survey data the reporters used for their story, as saying that the data didn’t surprise him, either.

“There is massive churn in the individual market, and always has been,” Levitt was quoted as saying. “It wouldn’t surprise me if many [health-law enrollees] were insured in the last year. He added: “That doesn’t mean they wouldn’t have ended up uninsured if not for the exchanges.”

You also had to read deep into the story to find out that the Affordable Care Act is reducing the number of uninsured in another important way: through the expansion of Medicaid in 25 states and the District of Columbia.

“The health law is chipping away at the number of uninsured consumers in other ways,” the Journal writers finally noted in the 15th paragraph.

They wrote that at least four million uninsured people are expected to enroll in Medicaid in the coming months. Perhaps twice that many would enroll if all the states expanded their Medicaid programs for low-income individuals and families as Congress intended when it passed the law. (The Supreme Court ruled in 2012 that the federal government could not force the states to expand their Medicaid programs.)

The reporters failed to note, however, that the law is chipping away at the number of uninsured in another significant way: At least two million young people have joined the ranks of the insured since a provision of the law allowing them to stay on their parents’ policies until age 26 went into effect a few months after the Affordable Care Act became law in 2010. Many others were able to get insurance through high-risk pools created by the law that allowed thousands of people with pre-existing conditions to find more affordable coverage.

Chipping away at number of uninsured

While the writers pointed out that about 48 million Americans were uninsured in 2012, they didn’t mention that almost 51 million were uninsured in 2009, the year before the Affordable Care Act was passed. So the law has been “chipping away” at the uninsured ever since it was enacted.

It’s important to keep in mind that the federal government has always said that the decline in the number of uninsured would be gradual. The Congressional Budget Office estimated in 2012 that 29 to 30 million uninsured Americans would be covered by the end of 2022. If more states decide to expand their Medicaid programs, as I think they will, that number will grow. But it will take time.

Nevertheless, despite the Journal’s headline, important progress is being made. Millions of people who previously were uninsured because they couldn’t afford coverage – or couldn’t buy it at any price because of preexisting conditions that made them “uninsurable” in the eyes of insurance companies – already are now insured. And millions of others are able to get as good if not better coverage than they had last year at a lower cost.

Another thing to keep in mind is that we are still more than two months away from the deadline to get coverage without having to pay a penalty. As we get closer to that date, we will see many more of the currently uninsured enrolling in coverage.

Even the Journal writers finally got around to making that point. “People have until the end of March to choose plans under the law,” they wrote, “so more of the uninsured could still flock to the marketplaces.”