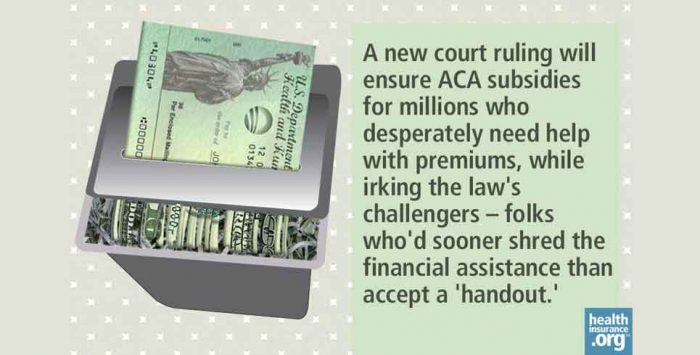 On Wednesday, U.S. District Judge Paul Friedman ruled against the ACA opponents who had challenged the authority of federally facilitated marketplaces (FFMs) to provide premium tax credits to eligible enrollees. The court’s decision reinforces – yet again – the validity of the ACA and its ability to withstand legal challenges.

The plaintiffs in Halbig v. Sebelius – three private businesses and four individual taxpayers – argued that premium tax credits were only supposed to exist in states running their own exchanges, and that the availability of the subsidies was detrimental to the plaintiffs. Subsidies are one of the most important aspects of the ACA, and the main provision for making health insurance affordable for low- and middle-income Americans.

The plaintiffs contend that if the subsidies were not available, they would not be able to get health insurance that qualifies as “affordable” and would therefore be exempt from the individual mandate. But instead, they are eligible for subsidies that reduce their premiums below the affordability threshold, and thus are required to purchase coverage or pay the individual mandate penalty.

The lead plaintiff, Jacqueline Halbig, was senior policy advisor for the U.S. Department of Health and Human Services (HHS) during the G.W. Bush Administration, and was also appointed by Bush as deputy director of the Center for Faith and Community-Based Initiatives.

A second plaintiff, David Klemencic of West Virginia, is uninsured and expects to earn $20,000 this year, making him eligible for a subsidized policy that would cost him only about $20 in premiums for the entire year. His opposition to the law appears incongruous with how beneficial it will be for him. But I called him one day after the judge’s ruling, and he explained his position further.

Klemencic views the tax subsidies as a form of welfare, and said that he “[doesn’t] want to be a part of that.” As a matter of principle, he said he would not accept the subsidies. So his health insurance would be significantly more than $1.70/month. (According to HealthCare.gov, the least expensive unsubsidized policy he could get would be $372/month).

Klemencic is self-employed, and in 2012 he said that the ACA creates “an added tax that would actually put us out of business.” I asked him to explain that statement further, and he noted that because he is not willing to accept subsidies, the ACA would force him to pay hundreds of dollars a month for health insurance – which he does not want to have – and which would amount to a significant financial burden based on his income.

Again, this hinges on his personal feelings about accepting subsidies. Based on the way the ACA is structured, people like Klemencic end up financially much better off than they were before, but that depends on their willingness to accept the subsidies.

Klemencic’s view is that health insurance and government intervention in healthcare are both part of the problem rather than the solution, and he prefers a simpler time when doctors made house calls and the barter system was part of healthcare. He also notes that he has an emergency fund in place to pay for healthcare, and has always paid his own medical expenses.

He’s added extra medical coverage to his car and motorcycle insurance, but prefers to go without regular health insurance as he sees it as “betting against yourself” and being forced to pay for other people’s poor lifestyle choices. With regards to worst-case scenario health care expenses in excess of his savings, he said he has family and friends who could help him out. It’s worth nothing however, that not everyone has that luxury.

While Klemencic’s position is based on his own principles regarding subsidies, a successful appeal in the Halbig case would have detrimental effects for the millions of Americans who desperately do want – and need – health insurance, but have no realistic way of affording it without the subsidies.

A decision is also expected soon in King v. Sebelius, a case involving three plaintiffs in Virginia with arguments similar to the Halbig case.

The crux of the lawsuit in both cases is the wording of the ACA and a subsequent IRS regulation. The ACA states that subsidies are available if the enrollee is “covered by a qualified health plan described in subsection (b)(2)(A) that was enrolled in through an Exchange established by the State under section 1311 ...”

The plaintiffs claim that subsidies should not be available in states where HHS is running the exchange, since those exchanges are not “established by the State.” Section 1311 of the ACA defines what an exchange must do, and notes that the exchanges are expected to be created by the states. But if you continue on to Section 1321, the law makes it clear that if a state refused to establish an exchange or was not on track to create one in a timely fashion, HHS would do it for them.

The IRS issued a final regulation in May 2012, clarifying that “the term Exchange refers to a State Exchange, regional Exchange, subsidiary Exchange, and Federally-facilitated Exchange.” But opponents of the ACA questioned the intent of the lawmakers who wrote the ACA, along with whether or not the IRS overstepped its bounds. Was the regulation simply a clarification, or was the IRS correcting a perceived flaw in the law?

The lawyers arguing that enrollees in states with HHS-run exchanges are not eligible for tax credits are splitting hairs and creating their own controversy. Nothing in Section 1311 or 1321 indicates that there are to be any punitive financial measures taken against states – or their residents – if they have HHS run the exchange.

Subsidies: a pillar of health reform

The writers of the ACA clearly intended premium tax credits to be a pillar of the new health insurance system. Section 1321(c), which describes how HHS will run the exchanges for states that are not willing or able to do so themselves, is less than a page long and has no additional caveats at all.

It simply says that the [HHS] Secretary will implement and operate the exchange in those states. It would seem that if Congress had intended for those states to forfeit their residents’ access to subsidies, they would have included a sentence about that in section 1321.

But they did not, because they had no intention of stripping subsidies from people who qualified for them. It makes much more sense that the lawmakers included the language about an “exchange established by the state” in order to clarify that subsidies were only to be available for people who purchased their policies through the official state exchange – not a private exchange or off-exchange.

In the King and Halbig cases, the plaintiffs are private citizens and businesses. But In Oklahoma and Indiana, the Attorneys General have both filed separate lawsuits along essentially the same lines, stating that premium tax credits can only be made available if a state is running its own exchange.

And unfortunately for the residents in those states, not only are their leaders trying to wrest their subsidies away from them (and essentially do away with the law that is providing many of their residents their first real opportunity to have health insurance), they’re also spending tax dollars to fight their battle.