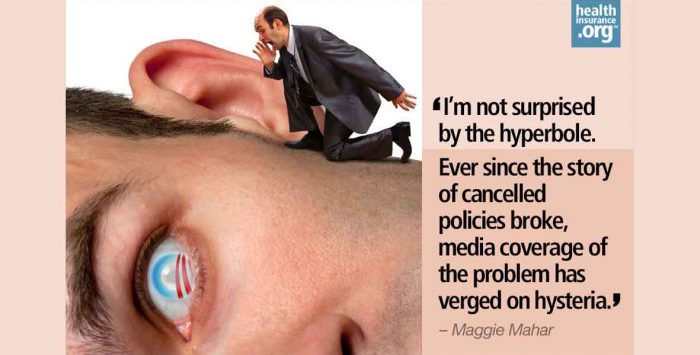 Thursday night, the White House shocked many by announcing that Americans who have lost their low-cost insurance because it doesn’t meet Obamacare’s standards will be exempted, for one year, from the mandate that all Americans carry medical insurance.

Under the new rule, people who have received cancellation notices can purchase the catastrophic plans that were originally designed for Americans under the age of 30 – or they can decline to purchase insurance altogether. “Obama Repeals Obamacare,” the Wall Street Journal declared.” On Sunday, Democratic Senator Joe Manchin warned that Obamacare could “collapse under its own weight.”

In fact, the administration is simply trying to smooth the transition to reform while responding to a media firestorm over “policies cancelled.” Reform’s opponents claim that millions of Americans who had purchased their own coverage in the individual market will be left uninsured because their policies don’t comply with Obamacare’s outrageous regulations.

The truth is that the policies that are disappearing did not provide the consumer protection that most Americans want and need. Some policies don’t cover essential benefits, including hospital care, prescription drugs and maternity benefits. Other policies cap how much an insurer will pay out in a given year. Still others call for out-of-pocket payments that could easily bankrupt a middle-class family.

How many will opt out of Obamacare?

According to the administration, fewer than 500,000 Americans will be affected by the change in the rules. But Reuters has reported that “some experts estimate that up to five million Americans have had their plans cancelled.” The Washington Post’s Ed Rogers claims that “millions of Americans” will go without insurance and, as a result, he gloats: “Obamacare just isn’t happening.”

I’m not surprised by the hyperbole. Ever since the story of cancelled policies broke, media coverage of the problem has verged on hysteria. (Read more about the media’s one-sided coverage of Obamacare.)

Try Googling “cancelled policies” and “Obamacare.” More than 84 million headlines will pop up, some claiming that “because of Obamacare,” as many as “100 million Americans” are losing the inexpensive coverage that they had purchased in the individual market, and will not be able to afford the insurance offered in the Obamacare exchanges. This is flat-out not true. (Thanks to Ezra Klein for making this very clear.)

Here are the facts about the policies that are disappearing: Just 0.6 percent of all Americans under the age of 65 are losing the insurance that they purchased in the individual market, and will have to shell out more for coverage next year because the plans they purchased don’t live up to the ACA’s standards for “affordable patient protection.”

But some will be perfectly happy to lay out more for better coverage. In an eye-opening study, Families USA noted, “Many would prefer new coverage options, even without subsidies. A recent survey shows that 45 percent of people in the individual market describe their insurance as ‘fair or poor,’ compared to 18 percent who have another form of coverage – including Medicaid.”

Families USA does the math. First, their researchers explain that only 5.3 percent of all Americans (15.2 million) are covered by policies they bought in the individual market. And not all of them received cancellation notices.

Secondly, among those who did get the dreaded letter, 71 percent of families will qualify for government subsidies that will help them buy much better coverage at a lower price. The average tax credit will be worth $5,548.

Granted, 29 percent of those who are losing their policies earn too much to be eligible for a subsidy. But an estimated 15 to 30 percent of Americans who are insured in the individual market suffer from pre-existing conditions. These are folks who want coverage. That is why they braved a Wild West market where carriers regularly overcharged, refused to pay claims, jacked up premiums, spent 30 percent of those premiums on marketing, advertising, executive salaries and other “administrative costs” – and cancelled policies on a routine basis.

Finally, what the media ignores is that many would have lost their insurance even if Obamacare did not exist. Families USA reports that in the past, just 35 percent of the individual market’s customers managed to hold onto their coverage for a year. Typically, the carrier hiked premiums – and the customer dropped the coverage – or the company scrubbed the policy. Thus, in any given year, the majority of policy holders were not able to “keep the insurance that they (supposedly) liked.”

Those who attack President Obama for “lying to them” have swallowed the much bigger lies that the media has been feeding to all of us. Roughly two-thirds of those cancelled policies would have disappeared by the end of this year – even if Obamacare had never passed Congress.

Taking all of the facts into account, here is my back-of-the-envelope estimate: Somewhere between 500,000 and one million Americans might decide not to replace their cancelled policies. My guess is that, at most, another 500,000 will choose catastrophic insurance instead.

Why so few? Anyone who signs up for a catastrophic policy will not be eligible for a subsidy. Thus catastrophic policies will appeal primarily to single, healthy young Americans who earn over $45,000 a year – the cut-off for government help. The majority of 20-somethings and 30-somethings earn significantly less.

Granted, many Americans would prefer insurance that is customer-tailored to what they need (or think they need). Many say they don’t want to pay for maternity benefits, contraception, mental health benefits, drug counseling, vision checks and free preventive care for children.

But the new rules don’t give them that option.

They have three options:

A referendum for Obamacare

Reform’s opponents will continue to fight the ACA – “hedgerow by hedgerow” – as if this were World War II. They will insist, over and over again, that Obamacare is failing. And many in the media will repeat what they say.

But the public has spoken: Reform is rolling forward. As of last week, more than a million people had signed up for coverage in the exchanges and about 4 million have been found eligible for Medicaid and the Children’s Health Insurance Program – and the pace of enrollment continues to rise.

There is no question: Obamacare is here to stay.