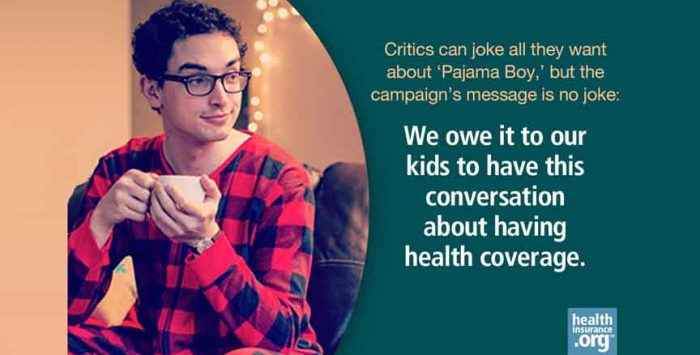 The #GetCovered campaign has urged middle-aged parents to speak with their uninsured adult children about health insurance over the Christmas/Kwanzaa/Thanksgivukkah holidays. It’s an important conversation that has drawn some pretty weird responses.

Most young adults are pretty healthy, and they don’t have much money. It’s understandable that many are tempted to forgo health coverage. That’s not a great idea. When someone “goes bare,” he runs the real risk that his family and friends-ultimately the entire community-will face huge avoidable problems if he gets into a car wreck or becomes seriously ill. Some are quietly or implicitly motivated by the thought: “If something happens, the ER has to treat me, and I can just sign up for Obamacare.”

This strategy is incredibly wrong-headed. EMTALA entitles you to necessary emergency care. EMTALA also entitles the hospital to send you whopping bills and to refuse to treat your important non-emergency medical needs. You can’t sign up anytime for ObamaCare, either. When readily affordable options are available, going bare becomes another, especially foolish form of prolonged-adolescent free-riding.

Organized for Action is running ads that encourage middle-aged parents like me to make sure that our kids sign up. These ads make conservative ACA critics unhappy. Once young adults start buying into the new exchanges, ACA becomes part of the fabric of everyday life. Moreover, these young adults would help stabilize the risk-pools in the new health insurance marketplaces.

So a conscious campaign is afoot to convince young adults not to sign up. Advocacy groups have produced creepy ads in which a scary, speculum-wielding Uncle Sam shows up at a young woman’s gynecological exam. Seemingly infinite numbers of misleading posts have argued young people will face “rate shock” when they go to sign up.

‘Pajama Boy’ in the crosshairs

OK, that “Pajama Boy” ad is a little dorky. It somehow brought out the crazy in some people. As MSNBC’s Adam Serwer effectively notes, the conversation moved awfully quickly from the suggestion that parents check out their options on a health insurance website to a rather homophobic panic over gender and sexuality.

[W]e now have Pajama Boy, a metrosexual hipster in a plaid onesie who wants you to spend your precious Christmas Day talking to him about the president’s vision for health insurance.

Cooke’s column is titled “Pajama Boy: The Obama Machine’s Id.” Since he writes an entire column based on one fairly nondescript photo, the piece provides a more revealing map of Cooke’s own head:

Pajama Boy is OFA; and OFA is Pajama Boy. The vaguely androgynous, student-glasses-wearing, Williamsburg hipster isn’t a clever marketing idea. It is the id of the Obama machine made public. 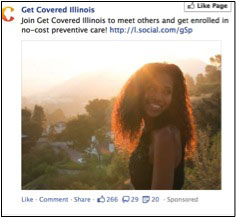 Cooke might be relieved to see the ad at the right – from my Facebook page. Conventional heterosexual men haven’t been entirely ignored.

Pajama boy can’t even fight, Cooke’s colleague, Jim Geraghty, surmises. “My money is on the guy from Big Bang Theory once they throw down in a slap fight.”

National Review editor Rich Lowry chimed in with a Politico column titled: “Pajama Boy, an insufferable man-child.” Something of an insufferable man-child himself, Lowry specializes in spreading juvenile memes that liberals are wusses. This prompted a satisfying (though juvenile and reckless) comeuppance when liberal comedian (now-Senator) Al Franken challenged Lowry to a fistfight. Lowry declined the challenge. This seemed wise since (a) avoidable violence is stupid, and (b) Franken is a solidly-built former wrestler.

Lowry’s penultimate paragraph is the closest he comes to discussing actual health policy:

[Pajama Boy] might be glad to pay more for his health insurance to include maternity benefits he doesn’t need as a blow against gender stereotyping, but most young people will presumably consider Obamacare more rationally and realize it’s a scheme to get them to subsidize insurance costs for older people.

Lowry’s generational-theft argument becomes a tad unpersuasive when one remembers that an estimated 86 percent of uninsured adults between the ages of 21 and 27 can receive free or subsidized coverage through ACA. Even without subsidy, a 27-year-old nonsmoking Chicagoan can buy a Blue Choice Bronze Plan for $125/month. That’s a pretty fair price.

More to the point, this rather funny OFA video exemplifies what the #GetTalking campaign is about. The ad apparently features the same Pajama-guy. He’s presented as a non-dorky, independent adult. He’s driving an SUV to his parents’ house for dinner. On the way over, he wonders what they’ve nervously invited him over to talk about. He’s relieved to find out that they’re worried because he’s been putting off buying his health insurance.

OFA’s accompanying text underscores that the message is really aimed at middle-aged parents such as myself:

This holiday season, millions of Americans have a chance to get quality, affordable health insurance-many for the first time. If you have family members who are uninsured, you can play a big part in helping them find coverage that works for them. It might not always seem like it, but your family listens to you. So have the talk.

These words are entirely sensible and accurate. We owe it to our kids to have this conversation. Whatever you think of ACA, this is one of the least-objectionable suggestions in American history. In a more sane political moment, people across the ideological spectrum would support this basic call to civic and family responsibility. It’s a sign of our actual political moment that Pajama Boy elicits such a strangely mean-spirited response.