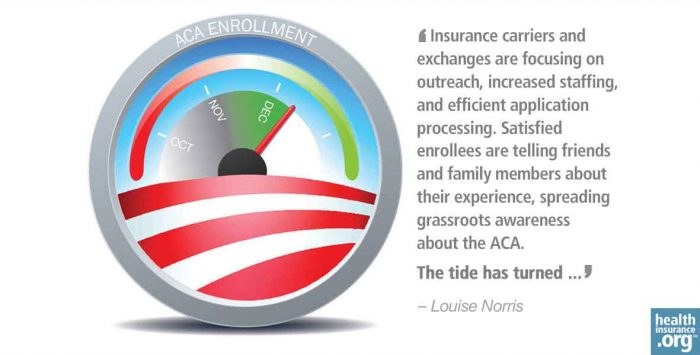 In the early weeks of open enrollment, much of the focus on the ACA was directed at the beleaguered exchanges. And since the media often equates “Obamacare” with “exchange” it was understandable that there was a dip in public support for the law this fall.

But the people responsible for implementing the ACA have continued to concentrate on the task at hand, and their efforts are paying off. Insurance carriers and exchanges are focusing on outreach, increased staffing, and efficient application processing. Satisfied enrollees are telling friends and family members about their experience, spreading grassroots awareness about the ACA. The tide has turned, and public opinion of Obamacare has recovered from its November low.

Representatives from five state-run exchanges – California, Connecticut, Kentucky, New York and Washington – joined a Families USA teleconference Wednesday to provide an update, and the mood was decidedly more upbeat than a similar teleconference in early October. All five states are running their own exchanges, and all are seeing a surge in applications as the December 23 enrollment deadline for a January 1 effective date draws near.

In those five state exchanges, 429,000 people have completed their enrollment. But this count is only tracking enrollment inside the exchanges. The ACA reformed the entire individual health insurance market, and in almost every state off-exchange 2014 plans are available and selling briskly. Insurance carriers must use a single risk pool for all of their individual members in a state, both on and off exchange (in some states, this is further combined with small group to create one larger risk pool).

And 2014 policies that are being purchased outside of the exchanges have to comply with all of the same benefit mandates and consumer protections as plans in the exchange. So the true number of people who are “enrolling under Obamacare” is far higher than the exchange counts.

But in the exchanges, enrollment totals are dramatically better than they were a month ago. In California, 80,000 people finalized their plan selections in the exchange in November. During the first week in December, 50,000 additional people selected a plan. And for the past week, Covered California has averaged 15,000 people per day selecting a plan. Most of them say that the process was easy.

In the Washington exchange, 20,000 people have completed their enrollment, and another 55,000 have finished everything except paying the premium. The exchange has doubled its call center staffing and is seeing interest and call volume far beyond what was originally projected.

Kentucky has long had one of the most successful exchanges in the country, and it continues to perform well. 92,000 people have enrolled so far, with about 25 percent in QHPs and 75 percent in Medicaid. Until recently QHP enrollment was closer to 20 percent, but is increasing rapidly.

Connecticut’s exchange has about 47,000 enrollees, divided almost equally between Medicaid and private QHPs. And when it comes to customer service, the exchange gets glowing reviews: 95 percent of enrollees are satisfied or very satisfied with the process, which has been taking an average of 45 minutes.

In addition to rapidly increasing enrollment, all five exchanges are reporting little or no back-end issues. The federal data hub that they link to for subsidy information is working great, accurate 834s are being sent to insurers and processed quickly, and none of the exchanges are having troubles with overload on their websites.

The young are enrolling

But what about all the mutterings from ACA opponents about “death spirals” and how difficult it is to get young people to enroll? Kevin Counihan, CEO of Connecticut’s Access Health CT, explains that all of the fuss about whether or not young people are enrolling is premature because the ACA has robust built-in risk adjustment mechanisms that will help to offset higher claims from older and sicker enrollees.

But it appears that young people are enrolling: 21 percent of the Covered California enrollees thus far have been in the 18-34 age group. In Connecticut and Kentucky, just under a third of enrollees have been under 35, and New York reported a “good mix” across all age groups. Young people are certainly not shunning Obamacare.

All of the exchanges are working closely with carriers to make sure that everyone trying to get a policy effective January 1 is able to do so. New York has extended the deadline for payment of the first month’s premium to January 10; Connecticut to January 7, and California to January 6.

Simultaneously with the exchange update conference call, America’s Health Insurance Plans (AHIP) announced that applicants who complete their enrollment by December 23 would have until January 10 to pay their first month’s premium and have coverage retroactive to January 1.

But not all state-run exchanges will push the payment deadline out: Peter Lee, Covered California’s Executive Director said that “Healthcare is local,” and that “consumers in California need to have paid by January 6th.” So although there will be a widespread ten-day grace period for payment of the first month’s premium, applicants should double check the deadline in their exchange and pay the premium as quickly as possible.

In describing the process so far, Lee mentioned that we’re “all in the first inning of a nine-inning game.” Not only is enrollment climbing and the process becoming increasingly smooth, but the lessons learned this year will serve to make the 2015 open enrollment even better. ACA implementation is a multi-year process. It will only get better from here.