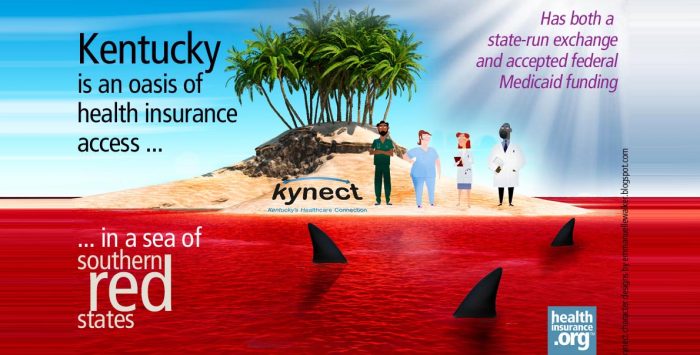 A week after the health insurance marketplaces (exchanges) officially opened, Families USA hosted a teleconference on October 8th to provide an update on how the marketplaces are faring thus far. Overall, it’s a mix of very high public interest and utilization, combined with sluggish web sites that are still being optimized to provide better online access. Specific updates from Kentucky, Virginia and Michigan were provided by organizations that are working to enroll people in each state.

Kentucky is the only southern state that opted to run its own marketplace, and its success so far has been one of the biggest surprises as states roll out their marketplaces. Its political leadership is divided on support for Obamacare, and misperceptions about the law abound. Barbara Gordon works with Kentuckiana Regional Planning and Development Agency, a nonprofit that was awarded a grant to provide in-person assistance in educating the public and enrolling people in Kynect, the state’s marketplace that had enrolled just under 7,000 people as of Tuesday morning. Her team is focused on education as well as enrollment, and she noted that people have been cheering and crying tears of joy after completing the enrollment process.

For some Americans, the ACA represents their first realistic opportunity to have health insurance. A large majority of the people Gordon’s group has assisted were eligible for Medicaid or premium subsidies. And while enrollees’ ages varied considerably, the majority so far have pre-existing conditions. This is to be expected though, as people who will qualify for premium subsidies and people with pre-existing conditions are among the most eager to enroll, while people who are healthy and/or won’t get subsidies aren’t in as much of a hurry … expect them in December.

Virginia has a federally-run marketplace, while Michigan has a state-federal partnership marketplace. In both cases, Healthcare.gov is the online portal for residents to enroll in a health plan. And it’s admittedly got bugs and glitches that have been frustrating to enrollees, navigators and the IT people who are working to solve the problems. Jill Hanken is a health attorney at the Virginia Poverty Law Center; Dizzy Warren is Michigan Consumers for Healthcare‘s Community Outreach Manager.

Both organizations have been awarded HHS grants to provide assistance to residents who need to purchase individual health insurance, and both women have a dedicated team of navigators working to educate and inform people about the ACA. In both states, paper applications and phone applications are rolling in, and interest has been extremely high, although online enrollment has been hampered by the problems that Healthcare.gov is experiencing.

HHS Secretary Kathleen Sebelius was on The Daily Show on Monday night, talking with Jon Stewart about the myriad benefits of Obamacare, as well as the technological problems that have plagued Healthcare.gov for the past week. Software contractors are working 24 hours a day to get the site fully functional, and Sebelius noted that it’s getting better every day.

States that are running their own marketplaces are having a little better luck with their online platforms, although they have seen their share of glitches too. In California, 16,000 applications were submitted by October 5th. Maryland had enrolled 326 people as of October 7th, but more than 13,500 people have created accounts. Low enrollment numbers relative to web site traffic should be expected at this time, as people need time to consider their options before enrolling in a plan. Brokers who have been selling health insurance for any length of time know that with most clients, there’s a significant length of time between getting quotes and submitting an application.

The high initial traffic numbers are indicative of a program that will be successful overall. Given the propensity to procrastinate when it comes to comparing health insurance policies, it’s a pretty fair bet that large numbers of applications will start to roll in much closer to December 23rd (the deadline for a January 1 effective date), and then throughout the first three months of next year.

Don’t panic … and give it a few days

Although complaints about the technological problems with the marketplace launch are understandable, it’s also helpful to keep things in perspective. The same thing happened when United Airlines and Continental merged their reservation systems. When Medicare Part D launched in 2005, enrollment was fraught with online delays and dropped phone calls. Once the initial hurdles were cleared, Medicare Part D became a very popular program – made even more so now that the ACA closes the donut hole.

That’s the message that HHS and navigators are trying to get out to the public right now. Don’t panic, and give it a few days. By next week, they’re hoping to have most of the major glitches sorted out, but even if you don’t get around to applying until the beginning of December, you’ll still be fine. And if you don’t need your policy to be effective in January, you can enroll anytime until the end of March, 2014.