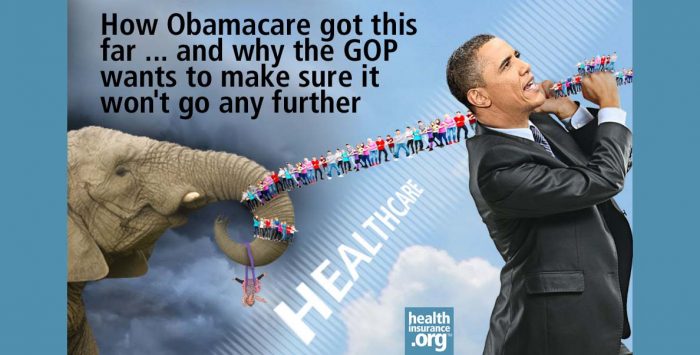 Hank Aaron has contributed once before with me at healthinsurance.org. He is the Bruce and Virginia MacLaury Senior Fellow at the Brookings Institution. He’s one of the nation’s leading wise men on matters of public finance and health. On October 1 – “D Day” for both ObamaCare and the government shutdown – we sat down to discuss various matters.

Below is Part 1 of an edited transcript regarding the rather dismal politics of the Affordable Care Act, but also the surprising potential of health insurance exchanges to achieve goals both liberals and conservatives want to realize in health reform.

Henry Aaron: It’s good to talk to you, Harold.

Harold: Why is health reform making people so crazy? The Republicans have shut down the government and threaten to do much worse over the debt ceiling. Why do you think they’re deploying such extreme tactics over this law?

Henry: I think different Republicans hold a full range of motivations with respect to the health care law. Some oppose the Affordable Care Act out of high principle, a genuine belief on the part of some opponents that ACA is taking health policy in a wrong direction, that it’s undesirable and is going to foreclose reforms that they see as better and more promising. Others oppose ACA for short-term political reasons. This is a device that can be used to weaken the government in power with, which they’re out of sympathy. Some of them, it seems to me, are engaging with a phantom of their own devising, not the real health care law that’s on the books, but a terrible creature that has been conjured up in their minds …

Some other Republicans – and I’m not just saying this, I’ve been told this by devoted conservatives who want to see their party achieve majority status – are not personally sympathetic to [extreme methods] of trying to reverse ACA. But they are very, very concerned that they will be primaried, and they don’t want to be. For electoral reasons, they are unwilling to buck those who are willing to use whatever means are available, including the debt ceiling, in order to fight the Affordable Care Act.

Those various groups seem to constitute a majority within the Republican Party, and account for the fact that Speaker Boehner, for good reasons or bad, feels that he cannot both bring a simple debt extension bill to the floor of the House and remain speaker, and he is not willing to do so at this time.

If he were willing to bring a straight debt ceiling bill to the floor of the House, most analysts believe it would pass with virtually unanimous Democratic support, and perhaps a third of Republicans. But a third is not a majority, and under the procedural conventions that Speaker Boehner is now operating under, you don’t bring it to the floor.

The gamble of health reform

Henry: Much is at stake here. When the history books get written in 20 or 30 years, scholars may well be critical of President Obama’s performance in many ways. But they will note – assuming health reform remains in effect and is implemented successfully – that one of the most transcendently important pieces of legislation in the last 100 years was enacted during his term in office.

I myself was skeptical. I thought it was unwise to go for such a large and sweeping reform. I thought the chances of success were not all that great. It ended up being a very close thing. The administration is certainly paying a very great political price for the efforts required to enact ACA into law. If it works, America will be a different country because of that law. Not many presidents can make that statement.

Harold: We’re talking on October 1. It’s Obamacare day. And it’s government shutdown day. I was just speaking on a National Public Radio program. One of the other guests, it turned out, was from the Physicians for a National Health Program. She basically said, compared to a single-payor system, the Affordable Care Act is extremely disappointing. As designed, it was going to leave 25 million uninsured, that we still have the evil private-insurance system. Given such criticisms, why is ACA such an important step for the country?

Henry: We have spent by some measures, 50 years, by some measures 80 years since the passage of the Social Security Act, battling what I would call the status quo with respect to the health insurance system. With the exception of the passage of Medicare and Medicaid in 1965, the nation has repeatedly backed away from far-reaching changes in the healthcare insurance system and delivery system. In every single case, we had backed away. The old line was that everybody had his or her favorite plan for health insurance reform. Everyone’s second-favorite plan was the status quo, and the status quo always won.

Obamacare has changed the status quo

ACA has changed the status quo. That is critically important. Not because the law is the last word, not because it is the simplest, the best conceivable health care reform, but because we determined to begin a process which I think is going to continue for many, many years.

At some point, we will recognize that the Affordable Care Act is not ideally designed, even within the limiting framework in which it was fashioned. It can be simplified. Medicaid coverage should be modified. Larger businesses should be welcomed into health insurance exchanges. Incentives should be used aggressively to promote reform in the delivery system and to help institute new payment methods. All of those things will happen in the coming years and decades, if this first step is implemented and takes root. That’s why I think this law is a watershed event, and the importance of its success cannot be exaggerated.

And to put things on the other side, what would happen were this law to fail, were it to be reversed, as many members of Congress would like to see it reversed? It is difficult to imagine circumstances under which another president would step forward to support really far-reaching changes to improve our health care system.

This would be true of Republicans wanting to move in the directions that past Republican candidates have embraced. It would be true of Democrats, perhaps even advocates of single-payor. They will look at the experience that President Clinton had, and (assuming, ACA were to fail) the experience of President Obama. A future president would examine this history and decide: “I cannot afford to bet my presidency.” So we will be stuck with the status quo. That would be unfortunate because people are uninsured, because the system costs too much, and because quality isn’t what it should be.

Harold: I believe ACA will succeed. I’m still concerned that future presidents will look at President Obama’s experience and think: “Wow, he has paid a really high price.” I wonder whether there’ll be a kind of Vietnam syndrome, where future presidents will stop short of big and complicated measures. They will think: “I’ve got a bunch of other things I need to do. Do I really want to spend my whole presidency on climate change or whatever. It’s just not worth it.” It’s not healthy for our democracy when political leaders have a sense that the important problems are just too big to tackle.

Read Part 2 of my interview with Henry Aaron