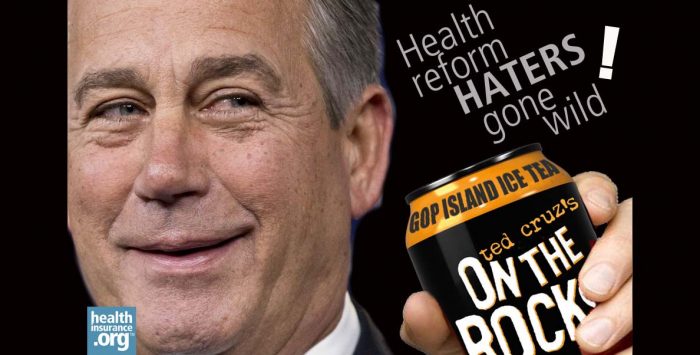 This is Part 2 of my interview with Hank Aaron. Hank has contributed once before with me at healthinsurance.org. He is the Bruce and Virginia MacLaury Senior Fellow at the Brookings Institution. He’s one of the nation’s leading wise men on matters of public finance and health. On October 1 – “D Day” for both ObamaCare and the government shutdown – we sat down to discuss various matters.

Below is Part of 2 of an edited transcript regarding the rather dismal politics of the Affordable Care Act, but also the surprising potential of health insurance exchanges to achieve goals both liberals and conservatives want to realize in health reform.

Read Part 1 of this interview.

Henry: I think there’s a good reason for concern … I don’t think we know what the fallout is going to be. It’s early. Exchanges are just opening. There are going to be all kinds of problems with them. I’ve heard reports already today that a number of the exchanges are not functioning. They’re overloaded.

Big surprise, they’re overloaded! People want to get insurance. They’re calling up. There are going to be problems of this kind. Both the problems and the successes we’re going to see over the next months will be central in the 2014 congressional elections. I also think in likelihood there are going to be enough problems and successes that it will be a major issue, perhaps the major domestic issue in the 2016 presidential election. This may be the election that really determines the long‑term trajectory for healthcare reform.

One can describe scenarios in which ACA leaves a bad taste. It’s even easier to describe scenarios that are benign, where people get insurance coverage where after a period of rough initial few months, the exchanges begin to operate as they were intended. If that happens, the next president might look at this experience and say: President Obama bet the house, bet the company on this. After a very rough patch, he succeeded. Maybe I should do it too.

Henry: It’s important first to distinguish among the states that have decided to implement their own exchanges from states that decided to leave this to the federal government. The states that are trying to develop their own exchanges, almost by definition, have substantial commitment from the state government apparatus. Whether it’s the governor or the legislature, they want to make it work. I’m sure there will be opposition inside those states. As a technical matter, some will do it well, others not so well. There will be a range of experiences, even among states where the government apparatus is supportive, and wants to make this thing work.

Then there are 33 other states that for various reasons decided to leave the job to the federal government. In some states, the legislature may well have decided: “This is really going to be hard to do well. We’re not sure we have the apparatuses to pull it off in the near term. Maybe we can take it over down the road, and that’s certainly an option after the first couple of years.” Then you have other states where the governor, and/or the legislature, and/or the attorney general, as in our neighboring state of Virginia are just really determined opponents, even to the point of engaging in behaviors designed to prevent the law from succeeding.

In those 33 states, I think you’re going to see a huge range of experiences … In some states where there are very large numbers of uninsured, where the governor is in opposition, where the legislature is opposed, and where there are determined efforts being made to prevent the law from being put into effect, I expect to see some very difficult times where the thing isn’t going to work very well.

Harold: What are some states doing to try to sabotage the new law?

Henry: Well, the most common strategy is to put procedural, or legal, barriers in the way of appointing so‑called navigators or in‑person assisters. These are the people authorized under ACA to provide direct counseling to help people make informed choices, when they get on the web, the computer‑assisted connection to the health exchanges.

Some states are doing their best to prevent these people from doing their job really at all, by putting high regulatory or licensing requirements in their way, that require them to pass tests showing they can do things they are not allowed to do, or not expected to do, under the exchanges themselves.

My favorite example – whose details I can’t completely confirm – is almost exquisitely wrong-headed. I received a call from a reporter in South Carolina who wanted to know what I thought of the proposal that a member of the South Carolina legislature, had introduced. He would offer credits against the South Carolina income tax for any fines imposed on South Carolina residents for failure to comply with the Affordable Care Act.

If you think about this for a moment, it’s just uniquely perverse. South Carolina’s a small state, if residents apply for benefits, for credits, tax credits, they’re going to be receiving credits that are paid for, probably 98 percent, by residents of other states. Here’s the state saying we will give our residents money not to take money from other states.

Harold: My first job an Obama campaign volunteer was to help be a guinea pig for the new computer phone system. They decided that they were going to connect me with my people, who were of course rural African‑Americans in South Carolina.

Many of the people that I spoke to had very serious health issues. They were poor people with health problems who needed help. There was a simple directness to their questions that hit me like a punch in the gut. When healthcare reform was passed, I remember thinking of one older man, in particular, being proud that we’d kept our promise to him. Unfortunately, I’m pretty sure he’s in that Medicaid-expansion group whose coverage was snatched away by John Roberts. I feel very bad about that.

This is also a state with some of the most Dickensian policy environments in the United States. At one point they cut the hospice benefit in Medicaid. They also reduced the number of Meals on Wheels that they would support, all in the name of austerity. The state’s mean-spiritedness towards its most disadvantaged residents is almost a caricature of itself.

Whatever problems may emerge with health insurance exchanges or other aspects of ACA, denying Medicaid coverage to people in poverty – coverage that is almost entirely free to the state government – is just an appalling miscarriage of justice. I find it hard to even talk about this without losing my temper.

Henry: I understand that. You mentioned what South Carolina reminded you of – and I’m not being facetious – it reminds me of Fort Sumter. The reason I say that is that what is going on now is perilously close to nullification. It’s an attempt by various state officials in various places to prevent the enforcement of federal law duly passed by congress, signed by the president.

I think there’s been some timidity among ACA supporters in calling out the tactics that have been employed by opponents. There’s really something about the opposition – for the reasons you described and from the standpoint of sheer governance, the way in which law is supposed to be enacted and enforced in this country – that is very disturbing and a threat to the functioning of our nation.

Tomorrow: Part 3 of my interview with Henry Aaron.