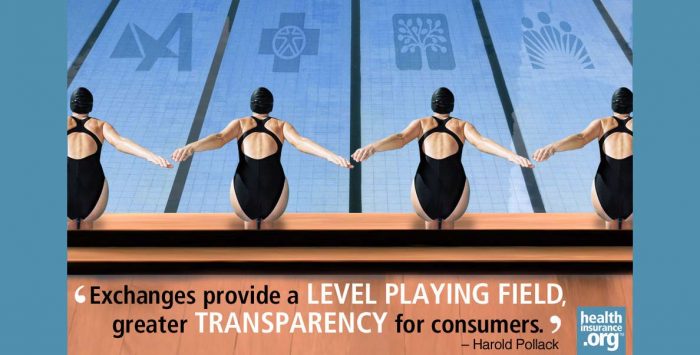 This is Part 3 of my interview with Hank Aaron. Hank has contributed once before with me at healthinsurance.org. He is the Bruce and Virginia MacLaury Senior Fellow at the Brookings Institution. He’s one of the nation’s leading wise men on matters of public finance and health. On October 1 – “D Day” for both ObamaCare and the government shutdown – we sat down to discuss various matters.

Below is an edited transcript regarding the rather dismal politics of the Affordable Care Act, but also the surprising potential of health insurance exchanges to achieve goals both liberals and conservatives want to realize in health reform.

The promise of the exchanges

Harold: Let me go from the sobering profound to the more mundane. There is some good news. When I look at the exchanges, I’m struck that many plans are being offered at reasonably prices. For example, two 40-year-olds with a child and a $40,000 income can buy a Silver plan on the exchange for about $200 a month. It covers a lot of stuff at a noticeably lower premium than was predicted by nonpartisan experts or conservative critics when health reform was passed.

Henry: I think that’s true, and I think we’re beginning to see evidence that competition among insurance vendors restrains prices. Now, one can be unsympathetic with the insurance industry for any number of reasons. It is far from clear that sale by individual insurance companies is the optimal way for a nation to arrange to have health insurance for all of its citizens.

But this is the system we’ve got. It’s the one ACA is depending on, and we’re beginning to see evidence that the dynamic market competition is supposed to generate is actually helping to hold down prices.

A venue for fair competition

Harold: It seems to me that the health insurance exchanges essentially allow insurance companies to function correctly in a proper market. Exchanges provide a level playing field, greater transparency for consumers. They forbid the kinds of discrimination against sick people that we don’t want to see as a society. They provide subsidies for people who could not otherwise afford coverage.

Within this framework, we can ask insurers: OK, show us what you can do. If you believe in the private health insurance system, it seems to me that you really must root for the success of these exchanges. There’s nothing inherently liberal about this setup.

Exchanges create a venue in which fair competition can function. We can then see how and whether firms add value to our healthcare system. If exchanges fail, I think it becomes reasonable to ask: why have these insurance companies? What are they adding? So far, though, the evidence suggests that they really can lower prices as firms tend to do when faced with real competition.

Working for liberals and conservatives

Henry: That’s exactly right. Even before ACA’s enactment, I felt that health insurance exchanges have the potential – this may be just a dream – to realize goals that both conservatives and liberals have long advocated.

The conservative dream has been that individuals could choose among competing plans, so that they get the plan that best matches their own preferences. They think that competition among different vendors will help hold down costs, and that insurers will police quality. I have somewhat less faith in those outcomes than many conservatives do. But if the exchanges operate effectively, many of those advantages will be realized.

On the other hand, if the exchanges work really well, they are going to become tremendously attractive to businesses of all sizes, to state and local governments. They are going to want to use and support these exchanges as a device to cover their employees. If that happens, the exchanges begin to have the potential to behave an awful lot like a single-payer entity.

Because they will have the authority and the power through regulations to shape the delivery system, to ensure that insurance choices have meaningful differences, to ensure transparent marketing practices, to provide individuals with fair and neutral information in choosing insurance. You could end up with a system that is able to achieve a large part of what I think liberals have hoped for from a single-payer system.

It’s not the direct route. It’s not the simple, straight line for either side. It is a framework within which, I think, both liberals and conservatives can realize a very large part of what they want from health reform.

None of this is going to happen quickly. It’s not going to happen easily. It’s not guaranteed to happen at all. But I think it’s not unreasonable to root for this outcome, and to do everything one can to help make the exchanges work, whether one is coming at them from the standpoint of a political conservative, or from the standpoint of a political liberal. It’s the course we’re going down. We didn’t choose single payer. We didn’t choose an unregulated insurance market. We’re going through the exchanges. Failure of these exchanges would be catastrophic. Success could achieve a very, very great deal.

Look to the states

Harold: That’s a hopeful vision. I believe that we will see people really cooperate and to try to realize the vision that you’ve laid out. But this can’t happen until President Obama leaves office. The reality is that health care reform is the centerpiece of his presidency, and thus the centerpiece of Republicans’ attack on him. So constructive problem solving won’t happen while he’s still in office. I say that with a heavy heart, because I believe he is sincerely interested in reaching out and doing that.

Some Republican governors will quietly and pragmatically to make ACA successful. Some – in Arizona, Ohio, and other states –  trying to find a dignified path to make this work. The president should really work with them. It is just so radioactive right now that the vision that you described must be realized in a less charged atmosphere than is possible, given the politics of the last three years.

Henry Aaron: I hope you’re right. The divisiveness in Washington didn’t start, however, with President Obama. I don’t think it’s going to end when he leaves office. We have become a more polarized nation, partly because of very effective gerrymandering, partly because of increasing degree of ideological or political self-segregation, resulting in situations where individuals of both parties can express surprise that the opposition is so strong. Because they don’t personally know anybody who holds those views!

There’s also the instant-reaction cycle, so that if somebody dares to speak compromise, true believers in his or her own party will immediately come down, and try to prevent that from happening. These changes in the environment transcend President Obama. I think they will be with us for quite some time, and are very worrisome.

How to measure success

Harold Pollack: Two or three months from now, if the average person is looking at what’s happening with health reform, hopefully by then the government will be open, and we won’t have crashed the world economy. What will be some of the things that we might look for to see whether health reform is going well?

Henry Aaron: January first is when people can begin to be insured through the exchanges. What I would hope is that in some states in the United States, the process of enrolling people and getting them access to coverage is well under way and people are, in the tens and hundreds of thousands, beginning to be insured through exchange plans.

Which side prevails is going to depend on facts on the ground – whether the computer systems operate, whether the in-person assistors are well trained and give accurate information.

I came across this quotation from the former HEW secretary, Wilbur Colin, who said that good policy is 1 percent inspiration, and 99 percent implementation. The law was passed. It’s now on the books. People are trying to make it work. They have to make it work if it’s to be good, sustainable policy.

Harold Pollack: We’ve spent so much time in the partisan thrust and parry about what health reform is actually going to do. We’ve been having a very abstract conversation about this mythical thing called Obamacare which most Americans don’t understand. We’re finally approaching the put-up or shut-up moment.

OK it’s not a moment. It’s a put-up-or-shut-up reality that people are going to assess. They will check out these exchanges. They’re going to see what their experience is and what’s offered. They’re going to see, “Is this making my life better? Are there people there to help me? Does this system function the way that it’s advertised?”

That’s the kind of accountability that we should have in public policy. Does this thing actually work? It’s too bad that we had such a long delay, so that so much of the politics and the public debate occurred in such a fact-free environment, where it was totally outside of people’s experiences.

Those of us who favor the law have a real responsibility to figure out ways to make it effective. If we do that, the politics will work out. This may not actually make the term “Obamacare” popular, but it will make these policies popular. If nothing else, it will help millions of people, which is the important thing.

If that man in South Carolina’s helped, I’ll be happy. If it’s called SouthCarolinaCare rather than Obamacare, that’s OK with me.

Henry Aaron: I think I’ll add one more thing. There’s reality, and then there’s the perception of reality. I’m confident that in a decent environment, over time, this thing could work. Will work.

That’s what happened in Massachusetts. Massachusetts was an easier job than is going to be the case in large parts of the country. But still. The key part was bipartisan political support. You had labor and the medical profession and business, all united and saying run it up against a problem, we’ll fix it. We’re not going to use it as a cudgel with which to beat the opposition.

Unfortunately, this constructive process isn’t happening in large parts of the country right now. There is reality, and then there’s the fight over the perception of reality. I think those of us who support the objectives and the content of the Affordable Care Act have a responsibility not just to try and make it work, but to try and make sure that people recognize that it’s working.