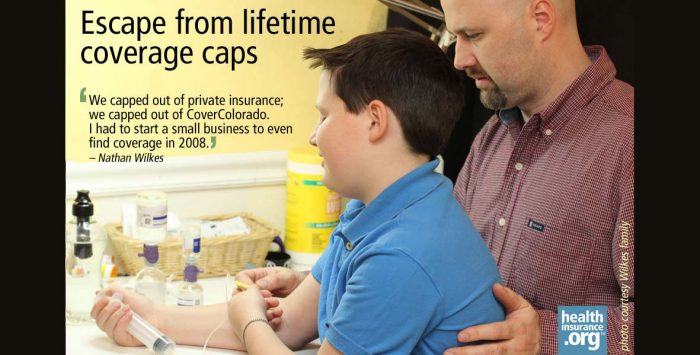 Nathan Wilkes is a Colorado father who came face-to-face with the realities of lifetime maximum benefits on health insurance policies before the ACA eliminated them.

His family exhausted their benefits on a private policy as well as CoverColorado, the state’s high risk pool. Both policies had $1 million lifetime maximums, and Nathan’s son Thomas has severe hemophilia that can cost that much in a year.

Thanks to the ACA’s ban on lifetime limits, the Wilkes family no longer has to worry about running out of coverage. Nathan has been a tireless proponent of healthcare reform, driven by his own family’s experiences as well as a desire to protect other families. He currently serves on the board of Connect for Health Colorado, the state-run marketplace where small businesses and individuals can compare qualified health plans and enroll in a plan. He joins us here to share his thoughts on the ACA.

An end to lifetime limits

Louise: Your family has been through quite a journey with health insurance, and you’re well-versed in how the rules have changed over the last several years. Obviously the fact that all policies will be guaranteed issue starting in 2014 is a huge benefit for anyone with pre-existing conditions. Are there other aspects of the ACA that are especially beneficial to families like yours?

Nathan: Elimination of lifetime caps is key for us. We capped out of private insurance; we capped out of CoverColorado. I had to start a small business to even find coverage in 2008. Our costs are extreme, even for the average chronically ill frequent flyer – on the order of $75,000 to $100,000 per month. However, our experiences are the same as the average person facing a high-cost acute or chronic illness – just more frequent.

Louise: Are there any parts of the ACA that might not be well understood by the general public but that you consider especially important?

Nathan: Another benefit that nobody ever talks about is community rating of the small-group market. Since I have to run my own small business to get insurance, the guarantee that the insurance companies can’t jack up our rates through underwriting is essential.

We’ve had that as a state law in Colorado since 2008, when I started my business, so I can attest to that benefit directly. Only a handful of states had modified community rating before, but now it is the law of the land. (The downside is that large-group is still underwritten by each group, so I cannot ever work for a company with more than 50 employees, or 100 in 2016, without expecting their premiums to increase by $1 million or more per year.)

Louise: From a consumer perspective, how does the ACA help everyone – not just those with high-cost medical conditions?

Nathan: There are many consumer protections we didn’t have before (such as guaranteed issue / no pre-existing conditions), and there are subsidies that will help many afford coverage. The essential health benefits help prevent insurers from selling junk insurance. The 80-85 percent MLR (medical loss ratio) rule prevents insurers from gouging people for profits. Rate review makes insurance companies have to publicly justify rate increases greater than 10 percent.

Expanded appeal requirements give individuals more options when an insurance company does deny a claim. Reporting requirements increase transparency, meaning that more people will see and understand how much their employers are paying for their coverage. The marketplace will give individuals and small businesses shopping/comparison tools that they didn’t have before.

Louise: As a supporter of the ACA and someone who can attest first-hand to the tremendous improvements that it makes to our health care system, can you also explain some of the shortcomings of the ACA? What would you like to see improved going forward?

Nathan: The ACA isn’t perfect, just like most things that come out of Congress. I told the White House so when they called me in 2009 in the middle of health care reform, and they agreed – but also saying they needed something to build on first.

Some of the areas where health care reform still needs work:

These areas that still need work would have been getting worse without the ACA anyway, as we have seen these particular problems growing prior to health care reform.

So, bottom line is that a lot of things got better and the things that are still broken – or getting worse – were that way long before the ACA. If anything, Congress and the states should seize the opportunity to go further with reform.