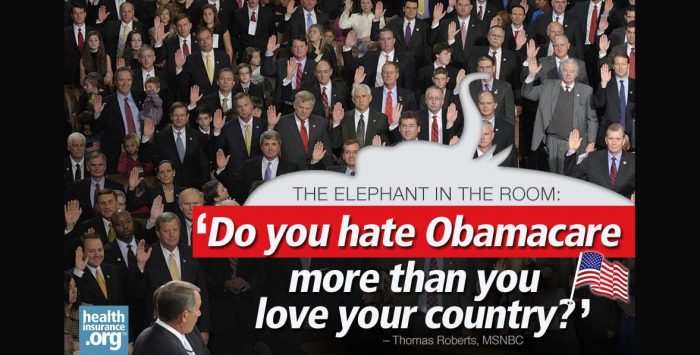 Roberts was questioning Blackburn over the government shutdown her party was using in their latest attempt to derail a law that was passed by Congress three and a half years ago, held constitutional by the Supreme Court, and reaffirmed by the people in a national election.

It’s a question that might have occurred to me after my own run-in with Blackburn when I testified – or tried to – in Congress about the Affordable Care Act. And because it’s established as the law of the land, perhaps it’s a question many of us should be asking our own member of Congress.

But don’t count on getting a straight answer. People like Blackburn are far more interested in making sure that the powerful special interests – the ones who have easy access to them and who write generous campaign checks – get what they want on Capitol Hill than in making sure that their uninsured constituents get the health care they need.

I also know Blackburn from my days in the insurance industry. I worked closely with our lobbyists in Washington and know she was one of the industry’s go-to people in Congress when we needed a champion for one issue or another. I singled her out as possibly the industry’s most reliable friend of the industry in an interview with then MSNBC Countdown host Keith Olbermann during the the health care reform debate. So her hatred of Obamacare is no surprise to me. The insurance industry can always count on Marsha Blackburn to do its bidding, whether in the halls of Congress or in front of a TV camera.

What is lost on Blackburn is the fact that it is patriotic to work to improve the lives of your constituents. It is patriotic to do what only members of Congress can do to end the discriminatory practices of the insurance industry that have resulted in millions of Americans – many in her district – being unable to buy coverage either because of the expense or because of pre-existing conditions that have made them “uninsurable” in the eyes of insurance company executives.

It is a good and patriotic thing to be a part of the solution to the many problems that have plagued our health care system for decades. It is not patriotic to continue to be a part of the problem, to be an obstructionist, to try to get rid of consumer protections in the Affordable Care Act just because insurance companies don’t like them.

The health insurance exchanges created by the Affordable Care Act will serve Blackburn’s constituents well because they will allow people who can’t get coverage through the workplace to become part of a large pool of other individuals, which will bring down the cost for everyone. It is important to have large pools of people – with healthy and not-so-healthy folks – to make health insurance work. It is not patriotic to do what some conservative groups are doing to discourage young people from buying insurance just to decrease the chances that the exchanges will work.

Some of Blackburn’s best friends in the corporate world are lobbyists for big for-profit insurance companies that are refusing to participate in the exchanges for fear of not begin able to make the profit margins their shareholders expect. Like Cigna, where I used to work, and Aetna and UnitedHealthcare. By sitting out of the new exchange pools, they are hoping to cherry pick healthier, wealthier people by making themselves less available to the very people the law is intended to help.

So good for Thomas Roberts for asking Marsha Blackburn the question that occurred to me when she refused to give me more than a few seconds. And good for all of us that Blackburn and her colleagues and their corporate benefactors were ultimately unable to gut a law that is making it possible for millions of Americans to finally get affordable health insurance.