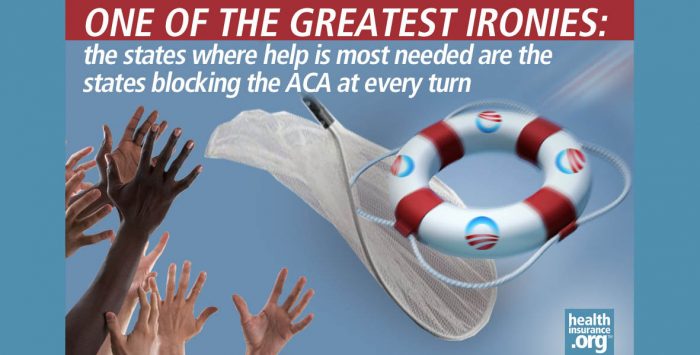 One of the great ironies of the implementation of the ACA is that the states where the law is most needed also tend to be the states actively trying to block it every chance they get.

For the most part, residents in blue states have access to more assistance, better-functioning websites, and expanded Medicaid programs. In most red states, however, the exchanges are run by HHS and have been plagued with technological difficulties, navigators are few and far between, and state refusal to expand Medicaid leaves millions of very low income Americans in a “coverage gap.”

Kentucky is an excellent example of a red state that is focusing on getting its citizens insured rather than ideological opposition to the ACA. Despite strong opposition to the ACA from Kentucky’s U.S. Senators, the state created its own exchange and is moving forward with Medicaid expansion. Michigan and Arizona, both red states, also opted to expand Medicaid. But unfortunately, states like these are the exception rather than the rule.

When the ACA became law in 2010, it gave states the option to create their own exchanges or have the federal government run one for them. It also expanded Medicaid to people with incomes up to 133 percent of federal poverty level, but this provision was struck down by the Supreme Court in 2012. States now have the option to expand Medicaid but are not required to do so.

If they do expand their programs, the federal government pays 100 percent of the additional expense for the first three years. After that, the portion covered by the federal government gradually drops to 90 percent by 2020. And then stays at that level permanently. States that choose not to expand Medicaid are not only rejecting billions of federal dollars, they do so at the expense of their poorest residents.

In most blue states, Medicaid is being expanded, states are actively working to educate their citizens about the ACA, and lawmakers have been proactive in creating state-run or state-federal partnership exchanges, designed around the specific needs of the state’s residents.

The ACA is vitally important for uninsured Americans and those with lower incomes. But it has also become a politically polarized issue. In most red states, it was apparently more important to make a political statement and stand against Obamacare than to use the provisions of the ACA to address residents’ healthcare needs. Twenty-six states are not expanding Medicaid, and 27 states opted to have the federal government run their exchanges – with most of the same states on both lists.

Not content to just do nothing and let the federal government handle their exchanges, some states have actively tried to sabotage the ACA. In South Carolina, the House passed a bill in the spring of 2013 that would provide a state tax deduction for the amount of any penalties incurred by residents who remain uninsured and run afoul of the ACA’s individual mandate.

South Carolina ranks 42nd in the country for household income, so residents are more likely than average to qualify for federal subsidies to purchase health insurance. And 19.4 percent of the state’s residents were uninsured in 2011, compared with 17.3 percent nationally. This is a state that desperately needed the ACA, premium subsidies and expanded Medicaid. And yet their political leaders have chosen instead to fight the law.

South Carolina also chose to not expand Medicaid, which means that uninsured residents with household incomes under 100 percent of federal poverty level will have few – if any – viable insurance options if they do not qualify for Medicaid under the existing rules. Lawmakers intended Medicaid expansion to be a basic cornerstone of the ACA, so the law does not subsidize private insurance for people with incomes under 100 percent of poverty level.

This coverage gap is a travesty, as explained by a recent New York Times editorial. It is unconscionable that millions of low-income, uninsured Americans will be left without affordable health insurance because some Republican lawmakers and governors chose to dig in their heels and oppose everything about the ACA.

Arkansas rejected federal funds to educate residents about the ACA. Texas has more uninsured residents than any other state, yet they did not expand Medicaid and Governor Rick Perry tried to reduce the ranks of navigators by requiring an additional 40 hours of training on top of the federal requirements (he was unsuccessful, but his efforts speak volumes about his priorities).

Mississippi ranks 50th in the U.S. for both overall health of its citizens and for household income. And yet Governor Phil Bryant is so fiercely opposed to the ACA that HHS actually denied the state Insurance Commissioner’s petition to establish a state-run exchange out of concern that Bryant would not support it (no other states were denied).

And the list goes on. It all amounts to a sad trail of politicians who value their political positions above the real-life needs of their constituents.