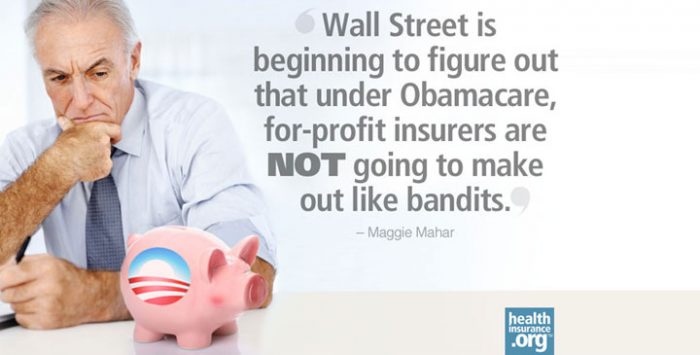 When Congress passed the Affordable Care Act (ACA) in 2010, critics charged that the Obama administration had “made a deal” with for-profit insurers. In return for industry support, reformers invited the insurers’ lobbyists to the table where they hammered out the details of the bill. There, they agreed to a mandate requiring that virtually all Americans purchase coverage (or pay a penalty), thus guaranteeing that carriers would gain billions in new revenues.

“It pays to be one of the few sellers of a product the government is going to force everyone to buy and provides subsidies to help them do it,” one critic sniped

But strangely, on the eve of the exchanges’ opening, investor confidence weakened.

What is going on?

Wall Street is beginning to figure out that under Obamacare, for-profit insurers are not going to make out like bandits.

Investors who drove carriers’ shares to record heights were misled by media reports that the White House had “sold out” to insurers. Meanwhile, they overlooked the many ways that exchange regulations would whack carriers’ profit margins:

In order to keep their seats at the table, insurers also agreed to pay annual fees to help fund reform. The fees begin at $8 billion in 2014, grow to 14.3 billion in 2018, and then rise to track any growth in premiums.

Finally, Wall Street ignored the ACA provision that reins in overpayments to Medicare Advantage insurers. Last week, when UNH announced earnings, it cited this as a reason it is lowering projections for next year’s profits.

Why didn’t investors recognize the many ways the ACA would squeeze carriers? Like most Americans, they hadn’t taken in the details of the ACA.

Okay, maybe investors and reporters didn’t read the legislation. But the insurers’ lobbyists were “at the table.” Why, then, did they swallow the new rules and fees?

“Because there is nothing the health insurance industry wanted more than an individual mandate to force people to buy their product,” explains Consumer Watchdog’s Carmen Balber.

As the Center for Public Integrity (CPI) points out, when the reform law passed in 2010, “the Democratic Party controlled the White House and both houses of Congress. By supporting the law, the industry was able to stay in the game on a very complex piece of legislation.”

Privately, lobbyists believed that Obama would not be re-elected in 2012. Down the road, they assumed that conservatives would help them overturn the parts of the bill that they didn’t like.

This is why, even while loudly professing their support for Obamacare, insurers were quietly funneling two-thirds of their campaign contributions to Republicans.

As they hoped, by October of 2011, the political environment had changed dramatically. “Democrats no longer hold a filibuster-proof majority in the Senate, the House is controlled by Republicans and the president is in a tight race for re-election,” CPI noted.

Insurers now were openly lobbying for new legislation that “would effectively gut” the provision that insurers must spend 85 percent of premiums on medical care. But to the industry’s utter chagrin, President Obama won.

Ultimately, carriers would lose on every point they hoped to see repealed.

Then came the final blow: Last summer, as carriers began proposing rates for the policies they hoped to sell in the exchanges, state regulators flexed new muscles.

The ACA had set aside $250 million for state insurance departments to support an “enhanced rate review process.”  Meanwhile, the administration encouraged regulators to get tough – and many did.

Even in states where regulators didn’t reject bids, the exchanges forced insurers to compete on price.  Brand-name carriers who been able counting on high premiums to offset the new regulations soon realized they couldn’t compete with non-profit insurers. For consumers, this is good news.

In the end, WellPoint wound up participating in exchanges in only eight states. UHC will be peddling policies in four.  “It’s almost surreal to see the most dominant company in the industry completely sitting out the launch of the … exchanges,” observes Deutsche Bank’s Scott Fidel.

So much for having a seat at the table.