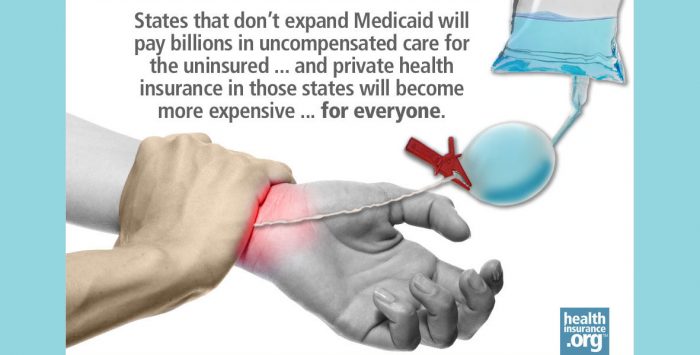 Medicaid expansion was established as a cornerstone of the ACA, and would have provided coverage for virtually all low-income Americans. But in 2012, the Supreme Court ruled that states could not be forced to expand Medicaid, leaving the final decision up to each state. So far, 25 states and the District of Columbia are moving forward with Medicaid expansion. The other 25 states are either not participating, or are still considering their options.

Unfortunately, states with the highest percentage of low-income uninsured residents are least likely to be expanding Medicaid. Subsidies in the exchanges are available for households with incomes between 100 percent and 400 percent of poverty level. Households below 100 percent of poverty level were supposed to be covered by Medicaid, but in states that are not expanding Medicaid, many of them do not meet existing Medicaid eligibility rules. Their income is too low to qualify for exchange subsidies.

Three million people – who would have otherwise had coverage – are expected to remain uninsured in states that are not expanding Medicaid.

Although the people most obviously impacted when states decide not to expand Medicaid are residents who would otherwise qualify for Medicaid, the decision also has broader ramifications. Not only will the states end up paying billions of dollars in uncompensated care for residents who remain uninsured, but private health insurance in states that don’t expand Medicaid will be more expensive as well.

States turn their backs on Billion$

Recent studies by RAND Corp and Kaiser Family Foundation found that Medicaid expansion – and the related drop in uncompensated care costs – would save a total of more than $18 billion across all states over the next decade. The deal is further sweetened by the fact that the federal government picks up the lion’s share of the expenses associated with expanding Medicaid: 100 percent of additional Medicaid expenses in the first three years, with the federal government’s share gradually decreasing to 90 percent by 2020 and remaining at 90 percent after that.

This is essentially a form of adverse selection, as these residents are likely to seek care shortly after becoming insured, and concentrate their care into timeframes when they have insurance. This ultimately leads to a destabilized private health insurance market and higher premiums.

In addition to a less stable health insurance market, subsidy eligibility in the exchanges starts at 100 percent of poverty level in states that are not expanding Medicaid, versus 138 percent in states that are expanding Medicaid. People with incomes between 100 percent and 138 percent of poverty level are projected to need more healthcare than higher-income enrollees in the exchanges.

Three million people who would otherwise have been eligible for Medicaid are now expected to enter the exchanges. As a result, the CBO predicts premiums will be 2 percent higher nationwide in the exchanges. That’s a national average though – the increase will be even higher in the states that aren’t expanding Medicaid.

Lost savings due to uncompensated care

Uncompensated care is another significant factor that will result in higher premiums for insureds in states that do not expand Medicaid and thus continue to have a large uninsured population. In 2008, uncompensated care resulted in more than $6 billion in costs being shifted onto private health insurance carriers, who in turn pass those costs along to insureds in the form of higher premiums. Medicaid expansion was supposed to eliminate most of those costs, but that won’t happen in states that choose not to expand their Medicaid programs.

While state and local governments pay about 30 percent of the cost of uncompensated care, the federal government paid more than $11 billion in 2011 in Disproportionate Share Hospital (DSH) Allotments (extra Medicaid payments to hospitals that treat a large number of uninsured patients). DSH payments are mostly scheduled to be phased out by 2020 because Medicaid expansion was expected to eliminate much of the need for uncompensated care.

In states that do not expand Medicaid, there will still be plenty of uncompensated care, but very little in the way of DSH allotments to help cover the cost. Hospitals will pass the expenses on to state and local governments and private health insurance carriers, increasing premiums for everyone.

The CBO predicts a wide range of decisions from the 25 states that have not yet opted to expand Medicaid. Some will likely work out modified arrangements with the federal government, allowing them to expand Medicaid up to 100 percent of poverty level, closing the coverage gap for people who currently earn too little money to qualify for exchange subsidies. Some may still choose full Medicaid expansion a few years down the road, and others might work out agreements to use federal Medicaid money to subsidize private health insurance for low-income residents.

States that continue to block any form of Medicaid expansion for their lowest-income residents will have to foot the bill for uncompensated care without the help of DSH payments, and their private health insurance markets will be less stable and have higher premiums for all enrollees.