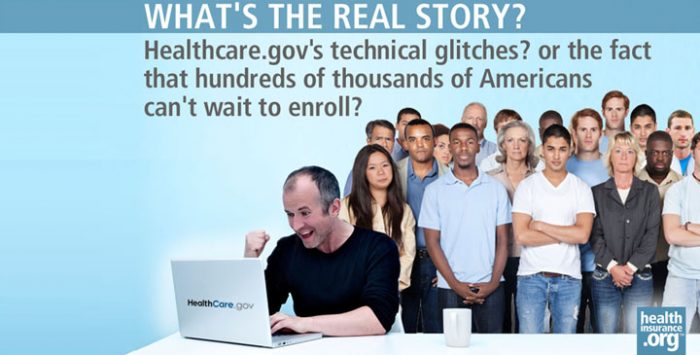 If you Google “Obamacare,” “exchanges,” and “disaster,” more than 20 million articles will pop up.

One month into a six-month enrollment process, the Media Pundits have spoken.

In truth, there are two tales to be told: one that is getting widespread coverage, and one that is not.

The story that sells newspapers

In the 36 states where the federal government is struggling to oversee online exchanges, both computers and human navigators have been overwhelmed by the sheer size of a sprawling project.

Originally, Congress thought the states would want to construct – and control – their own marketplaces. But 26 states (24 of them led by Republicans) refused. It was left to the Feds to run Healthcare.gov.

Health IT pioneer Fred Trotter says he is “not at all surprised” by what happened next: Technical glitches have created virtual gridlock.

“When you get a tremendous amount of traffic going to any site on the internet a single computer can’t handle it,” Trotter told Ezra Klein in a recent interview. “You have to have more than one computer sharing a task. At modern sites like Amazon and Ebay … the main innovation they’ve pioneered is using lots of computers at the same time to answer one query.”

Trotter explains Washington’s mistake: Congress looked at Amazon et. al., and said: “‘They do these amazing things and we should do that, too.’ They didn’t realize what a tremendous amount of invention has gone on at sites operating on that scale.”

And Healthcare.gov isn’t just trying to sell books: “They’re trying to do something entirely new.”

New is hard. Medicare Part D was a minor version of “new” and in the early weeks, its roll-out was equally fraught.

Trotter’s solution? Healthcare.gov should have enrolled people in phases: “They didn’t draft everyone for Vietnam all at once. They should’ve said people born in January can now get health insurance. Then it should’ve expanded to everyone born in the first quarter …”

Yet inviting people to participate in jungle warfare is rather different from offering them access to medical care. Sick Americans who can’t afford the medications they need have been counting the days. You can’t tell someone he must wait seven months simply because he was born in November.

A “phase in” of enrollment in the exchanges wasn’t possible, either politically or practically. But breaking the project up into smaller chunks would have helped.

Fourteen states – plus D.C. – elected to run their own marketplaces, and their experience shows that when the challenge is scaled down, exchanges can work.

Nineteen days into the five-month enrollment period, 500,000 Americans had filed applications to buy insurance, and more than half lived in those 14 states. Even in large states like California and New York, the marketplaces were humming.

Yet, Media Matters observes, the mainstream press has focused almost exclusively on the problems at Healthcare.gov, “at the expense of stories showing that the exchanges have allowed many people to successfully access affordable … coverage.”

As an example, the media watchdog points to a Wall Street Journal editorial claiming that website failures “have all but disabled Obamacare.”

What the author doesn’t understand is the difference between the program, Obamacare, and the process of enrolling in the exchanges. Think of it this way: applying for and securing a mortgage can be a huge hassle, but this doesn’t affect how happy you are with the home when you finally move in.

Moreover, earlier this month when Pew polled adults who have actually visited an exchange, 56 percent said the online website was fairly easy or very easy to use.

Yet the press seems determined to scare us. Just last week, the New York Times ran a front page story warning: Healthcare.gov “requires such extensive repairs” that “some specialists working on the project” are saying that it might not be “operating smoothly under after Dec. 15” – the deadline for customers who want coverage beginning on January 1 (edit: the deadline has since been extended to Dec. 23).

The reporters then quote a string of critics identified only as “one person involved in the repair effort;” “experts;” “one specialist;” or “people close to the program.”

Incredibly, the entire story rests on anonymous sources. It also ignores the states where the websites are succeeding – including New York.

It was left to Bloomberg to report the hometown story three days later in a video that begins: “Don’t tell Elizabeth Benjamin it’s tough to sign up for Obamacare. For two weeks, she has been enrolling uninsured people from her New York City office.

“Most recently, she helped a Bronx home-health worker in her 30s get health coverage for $70 a month.

“By week two, the system was pretty smooth,” Benjamin. reports.

Bloomberg acknowledges the problems in the federal exchange: “In Texas … 90 health insurance navigators, doing the same job as Benjamin, haven’t been able to sign up a single person …”

“It does come down to a Red State/Blue State divide,” Bloomberg’s reporter observes. “The Red States said: ‘We don’t want to have anything to do with Obamacare.'”

Kentucky shines: Three weeks after Kentucky’s website opened for business, 47,069 applications had been started, and 33,742 were complete. Why? Kentucky’s governor is a technocrat and a Democrat who was committed to reform.

Kentucky is not alone.

Marketplaces are flourishing in California, Connecticut, Minnesota, Nevada, New Mexico, New York, and Rhode Island. Click on the name of the state for testimonials from satisfied customers who describe themselves as “pleasantly surprised,” “relieved” and even “thrilled.”

The fact these exchanges are functioning stands as proof that the marketplaces can work. More than anything, success is all about “commitment.” A state’s leaders must want to make it work.

Granted, the states face an enormous challenge. But we know that it can be done – because it is being done in so many places.

And the Obama administration is nothing if not committed to health reform.