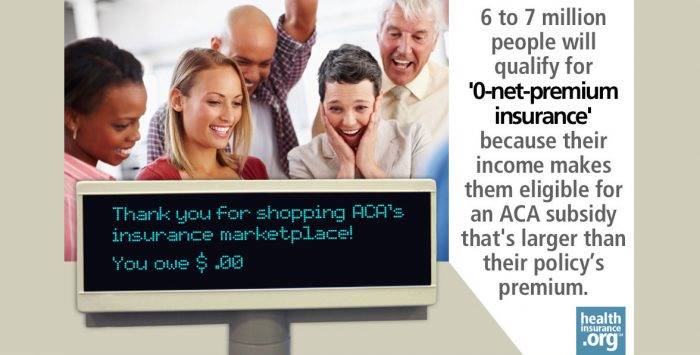 If you are now uninsured, or buy your own insurance in the individual market – and live in Texas, North Carolina, Missouri, Oklahoma, Louisiana, Mississippi, or Alabama – chances are greater than 1 in 3 that under Obamacare, you qualify for health insurance that will cost you nothing. That’s right – your government tax credit will cover the entire premium.

It gets better. After shopping the state exchanges during the first two weeks of October, McKinsey & Company, a leading global management consulting firm discovered that people who are currently uninsured (or who buy their own insurance) – in Florida, Wisconsin, Georgia, South Carolina, Tennessee, Virginia, Maine, Indiana, Kansas, Nebraska, Utah, Idaho, Montana or Alaska – stand a 1 in 4 chance of qualifying for a $0 policy.

How can that be? Nationwide, some 6 to 7 million people will qualify for “0-net-premium insurance,” says McKinsey, because their income makes them eligible for a government subsidy that will be larger than the policy’s premium. Americans earning less than 400 percent of the Federal Poverty Level ($48,950 for an individual, $62,040 for a couple, $94,200 for a family) will receive subsidies. The lower your income, the larger the subsidy will be, and the more likely it is that your premium will be $0.

This table from Credit Suisse reveals that in many states, uninsured Americans earning less than 175 percent of the Federal Poverty Level ($20,107.50 for an individual, $41,212.50 for a family of four) will be able to find zero-premium plans. Even if you earn somewhat more, it’s well worth the time it will take to check with your state marketplace. You may discover that while coverage isn’t free, your subsidy will bring the cost down to as little as $20 a month.

Credit Suisse analyst Ralph Giacobbe agrees that roughly “6.5 million Americans … will be eligible for a $0 premium plan. As a result, he believes that “affordability may not be a roadblock” to achieving the Congressional Budget Office projection that 7 million people will buy insurance in the exchanges in 2014. “Simply put, we don’t see any logical reason why anyone in this population wouldn’t take free healthcare coverage vs. remaining uninsured.”

The only question is this: How many people will hear about the free plans? Can we count on the media to inform the public? (Hat tip to the New York Times for publishing the story Monday, on A1.) Now, I would love to see it on FOX – and in Forbes.

McKinsey reports that about half of those who will be able to purchase zero-premium insurance are under 39 years old. In most cases, the policy will be a Bronze plan, which means that, if you become sick, you will be responsible for a deductible and co-pays. Under a Bronze plan the insurer will pay 60 percent of the total cost of any medical care you receive, while you pay 40 percent – up to a maximum of $6,350 a year ($12,700 for families.) One news story call this a “serious trade-off“?

I would say that how “serious” it is depends on your age and your health.

Keep in mind that the Bronze plan, like all plans sold in the exchanges, includes free preventive care – no co-pays, and the deductible does not apply when you buy contraception, or are screened for high blood pressure, breast cancer, or cervical cancer – to name just a few of the more than dozens of preventive services covered.  So if you are young, healthy and rarely see a doctor, the chances that you will come anywhere close to paying $6,350 out of pocket are slim to none. For most 20-somethings and the majority of 30-somethings, this offer is too good to turn down.

An even better deal?

But hold on: you might be eligible for an even better deal. According to McKinsey, roughly 1 million Americans will qualify for a “zero-premium” Silver plan. If you choose Silver, your deductibles and co-pays are lower: you are expected to pay only 30 percent of the cost of treatments, and once again, nothing for preventive care.

Moreover, Silver plans offer extra protection in the form of cost-sharing subsidies that are not available with any other plans sold in the exchange. Depending on your income, those subsidies could lower the maximum that you would be asked to pay out of pocket in any given year from $6,350 to roughly $2,120.

Even if your subsidy doesn’t cover the entire cost of a Silver plan, you might find that after using your tax credit, you can purchase a Silver policy for $100 a month – or less. Today, the New York Times quoted Dante Olivia Smith, a lighting designer from Manhattan who decided to do just that.

First, she learned that federal subsidies would allow her to buy a Bronze plan for $24 a month.

“‘It was astounding,’ she said. ‘I almost started crying, and called my mom.’

“In the end, however, she went with a Silver plan for $91 a month that included dental and vision coverage. Ms. Smith, who is 30, said she opted for the more comprehensive plan because of her work, which requires her to climb ladders and use power tools.

“‘If I had a different job, for 24 dollars a month I would have been like ‘Woo-hoo!’ she said. ‘But the reality is I know what my risks are in my life.'”