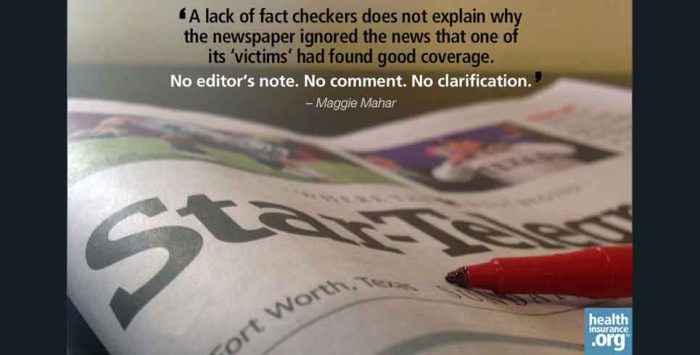 For months, health reform’s opponents have been feasting on tales of Obamacare’s innocent victims – Americans who lost their insurance because it doesn’t comply with the ACA’s regulations, and now have to shell out more than they can afford – or go without coverage.

Trouble is, many of those stories just aren’t true.

Yesterday I posted about a Fort Worth Star Telegram article that leads with the tale of Whitney Johnson, a 26-year-old new mother who suffers from multiple sclerosis (MS). Her insurer just cancelled her policy, and according to Johnson, new insurance would cost her over $1,000 a month.

Obamacare prohibits insurers from charging more because a customer suffers from a pre-existing condition. This rule applies to all new policies, whether they are sold inside or outside the exchanges.

At that point, I knew that something was wrong.

When I checked the exchange – plugging in Johnson’s county and her age – I soon found a Blue Choice Gold PPO plan priced at $332 monthly (just $7 more than she had been paying for the plan that was cancelled). Co-pays to see a primary care doctor would run just $10 ($50 to visit a specialist) and she would not have to pay down the $1,500 deductible before the insurance kicked in.

My radar went up. Recently, I have been reading more and more reports regarding “fake Obamacare victims.”

Now I couldn’t help but wonder: Who are these folks in the Star-Telegram story? The paper profiled four people who supposedly had been hurt by Obamacare. When I Googled their names, I soon discovered that three (including Johnson) were Tea Party members.

The paper describes them as among Obamacare’s “losers,” but the truth is that they didn’t want to be winners. Two hadn’t even attempted to check prices in the exchanges.

Meanwhile, it appeared that no one at the Star-Telegram even attempted to run a background check on the sources, or fact check their stories. I couldn’t help but wonder: “Why?”

The answer will surprise you.

When I tried to phone the reporter, she didn’t return multiple calls. Finally, I reached an editor at the paper. He told me that the both Yamil Berard, the reporter, and her editor were out of the office. I expressed my concern that inaccuracies in the story would discourage readers who were thinking about signing up in the exchanges. He suggested that I sounded like an “advocate” for Obamacare.

To my surprise, two hours later he called me back.

He had just received an internal email, he told me, which revealed that Whitney Johnson had found affordable health insurance for $350 a month – just $25 more than the premium on her cancelled policy, and roughly what I thought she would pay in the exchange.

I asked the editor if he could send me a copy of the e-mail. “No,” he replied. “It’s an internal memo.”

Would the paper publish a follow-up, acknowledging that Johnson would not have to pay $1,000 for coverage?

“I’m not sure what we’ll do with it.” He sounded cautious.

… but that’s not newsworthy?

To this day – more than a month after the story appeared – the Star-Telegram still hasn’t told its readers that Johnson had found affordable coverage or that under Obamacare, no 20-something – including Johnson – will be charged $1,000 a month.

I then contacted Johnson, who confirmed that she had found a $350 Blue plan outside of the exchange. Based on the details she provided, I managed to locate it. (The premium is actually $347.92 a month.)

The exchange plan offers a stronger safety net, and for someone with MS, this could be important: If her husband’s income drops, or he loses health benefits at work, they would immediately be eligible for a subsidy. Because her new policy is not on the exchange, they would have to wait until open enrollment in November 2014 to sign up for a 2015 plan with subsidies.

Next, I spoke to Steve Kaskovich, the editor who assigned the story to Berard. He explained that he had asked the reporter to write a piece about people whose policies were cancelled, and as a result were “caught in the quagmire.”

He didn’t know how three Tea Party members found their way into the piece. He said he would ask Berard to call me. She didn’t.

When I called Kaskovich back, he said Berard wouldn’t be able to get back to me until after the holidays. I explained that I planned to post the piece soon, and I would like to give her a chance to tell her side of the story.

It still seemed to me remarkable that she had simply stumbled on three Tea Party sources. Had they sought her out? Why had she believed that one couple in the story would face a staggering $20,000 deductible? (Under the ACA the deductible on a family plan is capped at $12,750.)

I once again inquired whether the paper planned a follow-up. “Probably” he replied, “after Berard returns to the office.”

I also asked if he had suggested that the reporter balance the piece by writing about “winners” – people who would receive subsidies and wind up paying less for better policies under Obamacare. He paused, and replied that he had not set any “parameters” for the story.

Finally, Yamil Berard called me. Now, the truth came out: “I was assigned the story and asked to complete it in a couple of days,” she said. She had turned it around in 1½ days, giving her little or no time to fact check.

To find sources, she had contacted a few people she knew – including an insurance broker. They spread the word, and friends of friends who had lost their policies turned up. She didn’t know that three were Tea Party members.

The young reporter also confessed that she didn’t know much about the Affordable Care Act. “I haven’t written about healthcare in a long time. We don’t have a healthcare writer. I cover about 15 other topics. Our staff is much smaller than it used to be,” she confided.

Her assignment had been clear: “To find people who were cancelled – and having some difficulty.”

After she turned in the piece, she told me that she had wanted to write a “good news” story about people who found better, more affordable coverage after their policies were cancelled. She pitched it to her editor. But he never assigned it. Despite the fact that the December deadline for enrolling in the exchanges was looming, “it wasn’t a priority.” Instead, “I got stuck on other stories” – one about an ice storm, and two business stories.”

A story not worth printing

This Star-Telegram story was doomed from the start: It certainly was hurt by the fact the newspaper has no healthcare reporter; that the story was assigned to a reporter who didn’t know much about the ACA; and that the reporter – admittedly spread thin – had only two days to find sources, interview them, and write the article.

Her editors obviously didn’t ask any questions about the sources. If someone had checked them out, they would have realized they were predisposed to hate the ACA.

What is most surprising is that her editors didn’t challenge the figures produced by the sources. A quick check at HealthCare.gov – or an interview with an exchange-certified broker – would have revealed that each source would have been a “winner” and not a loser.

Finally, the paper has no fact checkers. To be fair, this is not unusual. In the 1980s, all major publications employed staffers whose sole job was to verify facts. I began my career as a journalist at Time, Inc. doing just that. If a story was published and turned out to be inaccurate, the fact checker could lose her job. It was useful training. Today, the New Yorker is the only publication I know of that still uses fact checkers. (A few weeks ago, I received a phone call from one of them.)

No excuse for key omission

But a lack of fact checkers does not explain why the newspaper ignored the news that one of its “victims” had found good coverage. No editor’s note. No comment. No clarification.

Why is this important? This major daily’s nearly 200,000 daily readers saw the story that would lead them to believe that Americans who received cancellation notices were “left in limbo.” Most, it concluded, would wind up uninsured – or paying more than they could afford.  As I’ve pointed out many times – and as more and more coverage is revealing – the opposite is true.

Is the Star-Telegram alone in its subpar reporting about Obamacare? I’ll talk more about that in my next post.