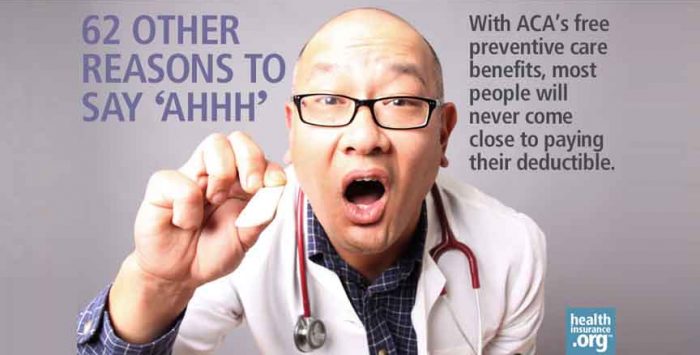 This week, President Obama launched a 20-day campaign aimed at focusing the country’s attention on the benefits of health reform. Over the past two months, everyone has been talking about the process of enrolling in Obamacare. Now, the President hopes to turn our attention to the product. Each day, he will emphasize a different aspect of the Affordable Care Act.

On Wednesday, President Obama focused on preventive care. Under the ACA, an extraordinary list of 62 preventive services will be free: no copays and the deductible will not apply.

This rule will hold true not just for plans sold in the exchanges, but for most employer-sponsored plans. Under Obamacare, they, too, must offer preventive care without cost-sharing – unless they are “grandfathered.” (Grandfathered plans are policies that existed before the ACA was passed in 2010, and that have not made substantial changes to benefits or cost-sharing since then.)

Free doctor visits for many

The ACA’s list of preventive services and products covers most of the reasons that many of us visit a physician – for blood pressure checks, cholesterol checks, flu shots, mammograms, tetanus shots, Pap smears or colorectal cancer screening. Contraception, diet counseling and Diabetes type 2 screening for adults suffering from high blood pressure also are included.

Some of us go to the doctor because we want help losing weight, or quitting smoking. Counseling and smoking cessation products – including nicotine patches – all make the list.

If we feel sad, and don’t know why, we may want to be screened for depression. Under Obamacare, this is a free preventive service. If you are a new mother who is feeling blue – or a 60-year-old man who just doesn’t want to get up in the morning – and your primary care physician (PCP) determines that you are depressed, he will send you to a someone who can provide counseling andor medication. The initial consultation with your PCP is free.

As parents, we take our children to doctors for a host of reasons – often because we want advice. “What should I feed a plump six-year old?” “My 14-year-old doesn’t like to leave his room-and he is being teased at school. Should I be worried?”

The ACA lists 25 preventive services for children, including diet counseling, depression screening for adolescents, vision checks for all children, oral health risk assessments for children under age 11, behavioral and developmental assessments, vaccines to protect against 12 diseases, obesity screening and counseling, flu shots and tetanus shots, all are included. You will not pay a penny for any of these services.

Most won’t exceed their deductibles

Lately, Obamacare’s opponents have been fueling fears that under reform, we will have to pay thousands of dollars out of pocket before our insurer begins paying medical bills.

Last week, an ABC television station in Phoneix warned viewers that if they purchase a relatively low-cost Bronze plan in an Obamacare exchange, they may be in for a rude awakening when they try to use the policy and discover that they “may have to spend $5,000 or more” paying down their deductible, “before the insurance kicks in.”

The notion that many of us will have to pay $5,000 or $6,000 out of pocket is yet another free-floating Obamacare myth. $6,350 is the maximum that an insurer can ask you to pay in co-pays and deductibles, and most people will never approach that cap, in part because so many services are considered “preventive.”

Under reform the only people who will reach the maximum are those who suffer from a serious chronic illness, or who land in a hospital.

How much will you save?

In 2011, primary care docs charged an average of $119 for a preventive care visit while specialists billed $128. Patients who had no insurance were expected to pay the full amount. Those who bought their own insurance in the individual market often found that unless they had met their deductible, they, too, had to pay 100 percent of the bill.

Even families who have employer-sponsored benefits might be asked for a co-pay of $15 to $40 per visit – or perhaps 20 percent of the bill. For a family with children, those $25-to-$40 co-pays can add up.

According to the Census Bureau, the average American visits a doctor 3.9 times a year. Let’s assume that two of those appointments are for preventive care. At $25 per visit, a family of four might save $200 a year because they no longer have to shell out co-pays. A woman of child-bearing age could save up to $600 annually because under the ACA her birth control is free.

Obamacare lists some 22 preventive services for women. Pregnant women can receive free screening for anemia urinary tract infections, gestational diabetes and hepatitis B. Later, they are eligible for breastfeeding counseling and breast pumps.

The ACA pays for breast cancer genetic test counseling for high-risk women, domestic and interpersonal violence screening and counseling, and osteoporosis screening for at-risk women over 60. Then there are Pap smears, mammograms, and, the most controversial preventive product – contraception.

Some men grumble: why should we have to bankroll so many services for women?

There are many answers, but here is one of the simplest: Women use more preventive services when they are younger, but as men age, the fact that they didn’t go to the doctor for blood pressure screening – or help losing weight – catches up with them. According to the Health Cost Institute, healthcare spending for women exceeds spending for men until age 60. At that point, men’s healthcare becomes more costly.

This is when healthy women begin subsidizing men. Of course, much depends on how long an individual lives. If a fit 70-year-old woman survives until she is 95, she may, in the end, cost society more than an overweight man who has a knee replacement, suffers from diabetes, and dies of heart disease at age 75.

But over the long run, these things even out. Different people need more care at different points in their lives. This is how insurance works: over time, we subsidize each other.