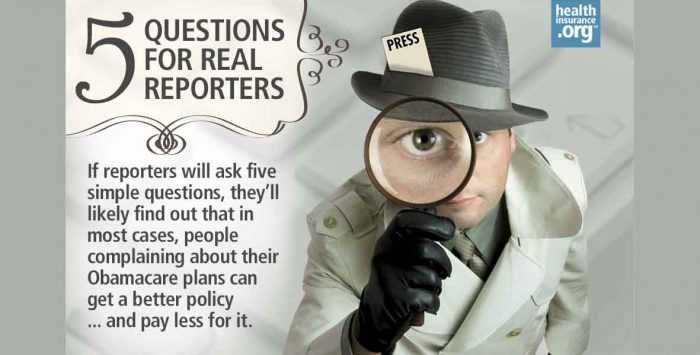 Americans who have been unable to afford health insurance in the past are finally able to use HealthCare.gov to enroll in a plan that doesn’t bust their household budgets. I’m now getting emails from folks who’ve used the website to choose a health plan for next year, and they’re telling me that, thanks to the tax credits available to low- and middle-income individuals and families, their premiums and out-of-pocket expenses for coverage beginning January 1 are lower – in some cases much lower – than they had expected.

Those stories will be common in the months ahead, but you can expect that politicians and media pundits who have been critical of health care reform will continue trying to create the impression that the Affordable Care Act is resulting in higher costs and inferior coverage for most people.

One tactic of reform critics has been to hoodwink reporters into writing stories about people who supposedly will have to pay more for coverage next year because their current plans don’t meet the standards established by the Affordable Care Act. Unless reporters are careful and do their homework, they may wind up being duped and write stories that are grossly misleading, as we’ve seen happen several times already.

One of the most recent examples occurred earlier this week when the New York Post carried a story about a Long Island man who claimed that he would have to buy a separate policy for one of his children because of Obamacare. It turns out he had entered erroneous information when applying online for a new policy. Later stories noted that he had entered the wrong number of dependents – three children instead of four – on his application.

When the information was corrected, he found out that, yes, his 18-month-old daughter would indeed be covered. The problem was on his end, not the government’s. But, by that point, the damage was done: far more people – including House Speaker John Boehner, who tweeted about it – saw the original Post story (or the Fox News version of it) than the correction.

As a former newspaper reporter and insurance company executive, I’d like to make a few suggestions to journalists who are approached by people claiming that because of the Affordable Care Act, they’ll have to pay far more for coverage next year than they’re paying now. If reporters ask these questions, they very likely will find out that in most cases, the people complaining can get a better policy through HealthCare.gov and pay less overall for it.

Are they eligible for tax credits?

Are the complainers able to take advantage of newly established tax credits that will bring their monthly premiums down, dramatically in some cases? Most of the people who need to buy coverage on their own earn less than 400 percent of the federal poverty level (for example, $45,960 for an individual; $94,200 for a family of four) and are eligible for tax credits to help cover their premiums.

A photographer in St. Louis, whose household income is approximately $25,000, told me he and his wife enrolled in a policy for next year with premiums that will be covered completely by the tax credits.

Are they underinsured now?

Are they currently underinsured? The Commonwealth Fund has estimated that as many as 30 million Americans currently have inadequate coverage that won’t come close to covering their medical bills if they are hospitalized as a result of a serious illness or injury. The Affordable Care Act will reduce that number substantially.

Many of the policies being discontinued by insurance companies don’t meet the standards established by the ACA to protect people from financial ruin if they get sick or hurt. A lot of the policies that will eventually be outlawed fall into the category of what Consumer Reports calls junk insurance. Some of these policies are so bad they don’t even cover a stay in the hospital.

Does their plan have lifetime limits?

Do their current plans have annual and/or lifetime limits? Millions of people have been in health plans that have lifetime and annual caps on what the insurance company will pay following an illness or injury. The caps frequently are exceeded after treatment for a disease like cancer, meaning that the policyholder has to cover all expenses after that set amount. The ACA abolishes both annual and lifetime caps.

Do the complainers have policies that exclude coverage for pre-existing conditions? Before the ACA, insurers could refuse to cover expenses related to anything you had been treated for previously. That is now a thing of the past. In addition, insurers can no longer refuse to sell you a policy because of a pre-existing condition, and they can no longer base premiums on the status of your health.

These are just five things reporters should ask about before writing a story based on someone’s complaint. If they’re responsible journalists, they’ll want to know all the relevant facts before filing their stories.