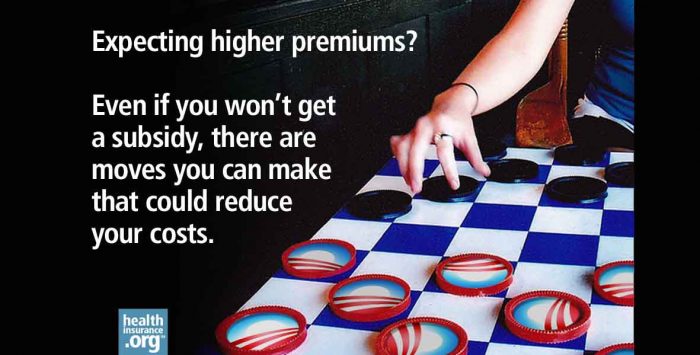 Although many people who purchase individual health insurance will see their premiums lowered in 2014, some will end up paying more instead.

ACA subsidies effectively limit premiums for the second lowest-cost Silver plan in ACA’s exchanges to no more than 9.5 percent of income, as long as your income does not exceed 400 percent of the federal poverty level (FPL) – or about $94,000 for a family of four. Even if you don’t qualify for a subsidy, your new rate might not be significantly higher than your old premium.

But for some people, the new guaranteed issue policies will be more expensive than what they’ve had in the past. If you’re struggling to pay the premiums, the knowledge that the policies provide better coverage might be of little comfort.

So what can you do if your premiums are increasing significantly for a 2014 plan?

If you’re just slightly above the income threshold for subsidies, you may be able to reduce your modified adjusted gross income (MAGI). This is a good summary of how MAGI is calculated with regards to ACA tax subsidy eligibility. Basically, you take your adjusted gross income (AGI) – on line 37 of your 1040 – and add non-taxable Social Security benefits, tax-exempt interest, and (for Americans living abroad) any earned income and housing expenses. (As always, contact a tax professional if you have questions about your specific situation.)

Contributing to a traditional IRA or health savings account lowers your MAGI used to determine subsidy eligibility. Most Americans are eligible to deduct contributions to a traditional IRA. To fund an HSA you must have an HSA-qualified high deductible health plan, so you might want to consider this as a possibility. If these contributions bring your MAGI below the subsidy threshold, you can apply the subsidy to any “metal” plan in the exchange, bringing the price of a Bronze plan more within reach.

Shop around … even off-exchange

If it’s not possible to get your MAGI below 400 percent of poverty level, shop around for coverage. Although it’s much easier now to compare apples to apples in terms of benefits, there is a lot of variation in networks, and carriers still have flexibility with plan design. This means that even within the Bronze level, there can be significant price variation.

Delay the start of your new plan

If your state allows it, another possibility is to delay the start of your new plan, either by early renewal of your current policy (and keeping it until it renews in late 2014), or by shopping now in the existing individual market for a new policy and then keeping that plan for a year.

Don’t do this without first making sure that you’re fully aware of the benefits that are included on all ACA-compliant plans and exactly how existing plans might be lacking in comparison. The new plans are better, without a doubt. And if your existing policy falls into the “junk” category, you’ll be better off paying more for a policy that provides a true safety net in the event of a serious illness or injury.

But if your current policy is a good-quality plan, you may want to extend your policy into 2014 if your carrier allows this. Although President Obama announced in November that existing plans could be extended into 2014, it’s still up to the states to decide whether to allow it.

And even in states that are allowing existing policies to carry over into 2014, not all carriers are participating. The President’s announcement will likely result in some previously cancelled plans being available for renewal instead, but some states and carriers are maintaining their requirement to switch to ACA-compliant plans as of January 1.

In states that are allowing existing policies to extend into 2014, some carriers are still selling policies with 2013 effective dates for a few more weeks. If you’re healthy and can qualify for a medically underwritten plan, you can shop in the existing individual market for a new plan.

Use an independent broker who represents all the major carriers in your state, and be sure to read the fine print on the policies. Remember that these are not ACA-compliant plans, so most of the consumer protections that the ACA puts into place will not apply. Shop carefully.

If you renew or purchase an individual plan and keep it through next year, you will have to switch to an ACA-compliant plan when your policy renews in late 2014. But you will have delayed the premium hike – and the associated consumer protections and benefits – for one more year.

There is concern that if too many healthy people opt to extend their existing underwritten policies through 2014, the exchanges will have a high percentage of enrollees with significant claims, leading to higher premiums for everyone in 2015. From that perspective, it’s preferable to enroll in the exchange in 2014 rather than extend an underwritten policy.

But if you’re struggling to pay the premium, keeping your family on an underwritten policy for another year is a better option than going uninsured, especially since you’d have to pay a penalty for going without insurance.