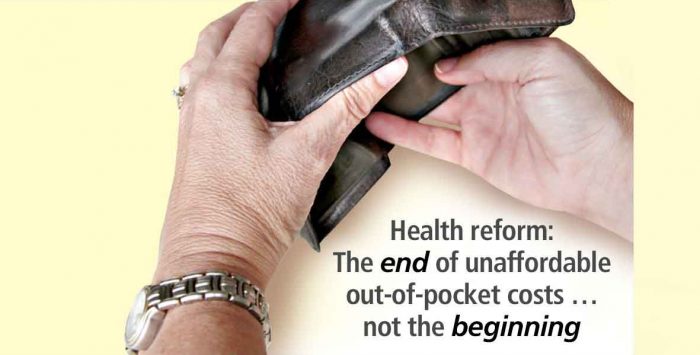 Do you remember the headlines warning that under the Affordable Care Act, skyrocketing insurance rates would cause “sticker shock”? As it turned out, thanks to transparent markets in the exchanges, insurers had to compete on price, and premiums are lower than expected.

But don’t worry, reform’s opponents haven’t run out of talking points. (I expect that long after most of the country has begun to enjoy the benefits of Obamacare, out-of-touch conservatives still will be muttering to themselves – rather like Japanese officers who held out in the jungles of the Philippines after WW II ended, unable to accept the fact that they had lost the war.)

In search of a new meme, they have latched onto the idea that in the exchanges, customers will face “Staggering Out-of Pocket Costs.” Not long ago, Fox News summed up the argument: If the policy you bought in the individual market is cancelled because it doesn’t conform to the ACA’s rules, and you are forced to purchase coverage in an exchange, co-pays and deductibles will soon make you realize that the ACA is really “The Unaffordable Care Act.”

Fox picked up the theme from a Bloomberg News story that went viral: “Obamacare Deductibles 26% Higher Make Cheap Rates a Risk,” the Bloomberg headline screamed. As evidence, Bloomberg pointed to a survey of seven states, done by HealthPocket Inc., that compares the average deductible a consumer will face if he purchases a Bronze Plan in an Obamacare exchange to the average deductible in the private-sector market where 5 percent of Americans have been buying their own coverage. (These are the policies that are disappearing because they don’t meet the ACA’s standards.)

HealthPocket’s survey claims that in the pre-Obamacare private-sector market, deductibles averaged $3,589, while in the exchanges, the typical Bronze plan will carry a $4,509 deductible. “That’s 26 percent higher … and a scenario likely repeated across the country,” Kev Coleman, head of research and data at HealthPocket, told Bloomberg.

What about the other 43 states?

I couldn’t help but wonder: can a seven-state sample provide an accurate picture of out-of-pocket spending nationwide?

Let me be clear: Coleman didn’t cherry-pick the data. When he did the research last spring, he relied on proposals that insurers who planned to sell policies in the exchanges had filed with state regulators. As it happened, at the time, those filings were available only in seven states. When he published the study in June, he emphasized that it would be “premature” to draw conclusions. Fair enough.

But when Coleman talked to Bloomberg, he seemed more confident that the scenario he had found in seven states would be “repeated across the country.” As bloggers like John Goodman turned his data into headlines, “26% higher” became a fact.

How much consumers pay now

While searching for more information, I found a July 2013 Government Accounting Office (GAO) report that surveyed how much consumers are being asked to shell out, pre-Obamacare, when they purchase their own insurance. GAO looked at all 50 states, and broke the policies down into three categories:

As I expected, the GAO research showed that, by and large, minimum-premium plans carried the highest deductibles: In Missouri, a 30-year-old who bought one of those plans could face a $5,000 deductible. Meanwhile, the “high-premium plans” call for much lower deductibles.

This also is true in the exchanges. Bronze plans boast the lowest premiums, but call for more out-of-pocket spending, while more expensive Platinum, Gold and Silver plans ask customers to pay significantly less out of pocket.

But when calculating deductibles in the exchanges, HealthPocket focuses exclusively on Bronze plans, and then compares those Bronze policies to all private-sector plans – including those with the lowest deductibles.  Thus, the survey exaggerates how high deductibles are under Obamacare.

In some states, the average Bronze plan carries a $5,150 deductible, while the average deductible for a Silver Plan is $2,550. Some Platinum plans come with a “zero-deductible.” This tells you how unlikely it is that, if you included all four tiers of coverage, the “average” deductible in the exchanges would be $4,509.

Coleman defends his research, telling Bloomberg that comparing Bronze plans to all plans in the private market was “a fair comparison because Bronze Plans, as the cheapest, are likely to be the most popular with consumers.”

But even if 80 percent of exchange shoppers pick Bronze (which I doubt) once you factor in the other plans, deductibles will not “be 26% higher in the Exchanges.”

To compare out-of-pocket costs inside and outside of the exchanges, we should look, not just at deductibles, but at co-pays and co-insurance.

Here is the most important question that shoppers need to ask: What is the maximum that I can be asked to lay out?

One reason many state insurance commissioners are refusing to renew some plans that don’t meet ACA standards is because they provide only the illusion of financial security. In 37 states, if a family of four has a low-premium policy (comparable to Obamacare’s Bronze plan) co-insurance and deductibles can total $25,000 to $50,000. In a few states, there is no limit on out-of-pocket liability.

This is how people lose their homes.

Under Obamacare, customers who purchase low-premium plans also will face steeper co-pays and co-insurance. But here is the difference: under the ACA, total out-of-pocket spending – including deductibles – is capped at $6,350  ($12,700 for a family).

Granted, most people don’t have $6,350 lying around. But it is an amount that a hospital will let you pay off over time.