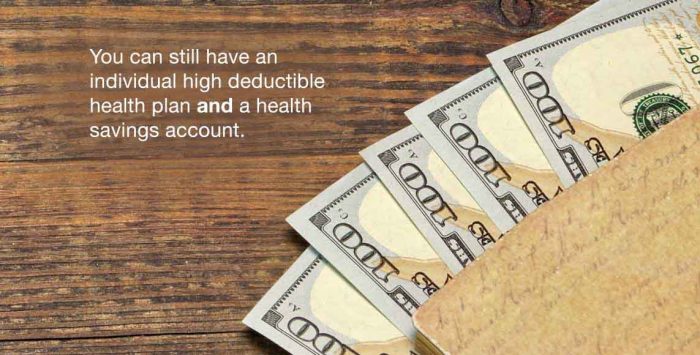 Q.  Under the ACA’s regulations, can I still have an individual HDHP and a health savings account (HSA)?

A.  Yes, you can still have an HDHP and an HSA, and there are HDHPs in the ACA-compliant market in nearly all areas of the country.

There was initially some concern that high deductible health insurance plans (HDHPs) wouldn’t be able to meet the ACA’s actuarial value requirements (at least 60% of average costs covered), but that was resolved prior to the 2014 launch of the ACA’s exchanges. HDHPs are well-represented among the ACA-compliant individual market plan options, both on and off the exchanges.

And starting in 2019, HHS began considering ways to encourage more insurers to offer HDHPs, and “exploring how to use plan display options on HealthCare.gov to promote the availability of HDHPs to applicants.” For HSA-eligible plans in 2021, HealthCare.gov displays the plan with a blue banner (under the monthly premium amount) that says “Eligible for a health savings account.” This is a more prominent notice than the one that was used prior to 2020. In short, HDHPs are alive and well, and HHS is focused on making them a more attractive option for more enrollees.

So while the ACA did away with plans with extremely high deductibles and out-of-pocket exposure, the new guidelines worked perfectly with the regulations pertaining to HSAs and HDHPs.

How the ACA changed HDHPs

The Affordable Care Act did change a couple of rules regarding HSAs, effective in 2011:

As a result of the COVID-19 pandemic, the IRS also relaxed the rules to allow HDHPs to pay for COVID-19 testing and treatment pre-deductible without compromising the plan’s HSA eligibility.

In 2014, the out-of-pocket maximums for individual health plans under the ACA were the same as the limits on HDHPs:  $6,350 for individuals and $12,700 for families.

Clearly, HSA-qualified high deductible plans fit easily within the guidelines established by the ACA. And they have remained a popular choice in the individual health insurance market since the bulk of the ACA’s reforms took effect in 2014. But while they were among the lowest-priced options on the market in the early years of ACA implementation, that has begun to change as the maximum allowable out-of-pocket exposure on non-HDHPs has climbed quite a bit higher than the maximum allowable out-of-pocket exposure on HDHPs.

Higher out-of-pocket costs generally go hand-in-hand with lower premiums, which means that there tend to be several plans in most markets that are now priced lower than the available HDHPs. And while HDHPs were primarily in the bronze and silver metal levels in 2014, they’re becoming more common in the gold level. But by and large, HDHPs do continue to be among the lower-priced options in each area.

What about standardized plans?

There was initially some worry about HSA-qualified plans being driven out by standardized plans, but that has not come to pass. HHS introduced optional standardized plans for 2017 on Healthcare.gov, and included a bronze HDHP in the standardized plan designs for 2018. But they did away with the standardized plan designs altogether as of 2019. Instead, they have worked to develop ways to put more of a focus on HDHPs and working to differentially display them on the plan comparison screen, to make them more obvious to consumers (the HSA-eligible tag for plans sold on HealthCare.gov is larger and more obvious now than it was prior to 2019; there is also a filter that consumers can use to narrow down the options to only see HDHPs).