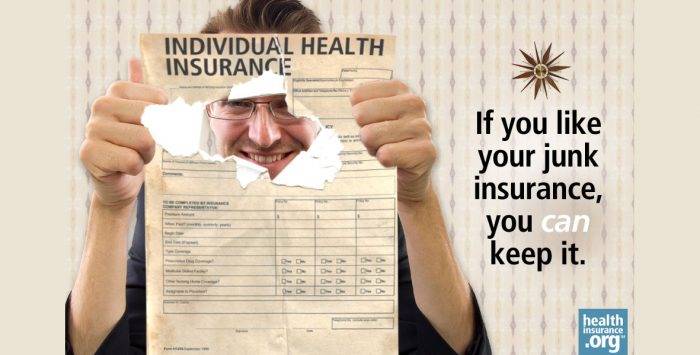 Yesterday, President Obama surprised foes and friends alike by announcing that he will encourage insurance companies to renew their customers’ 2013 policies, extending them for another year – even if they don’t meet the Affordable Care Act’s standards for affordable, comprehensive protection.

In other words, your insurer doesn’t have to cancel your policy just because it doesn’t cover the ten essential benefits. You’re not going to lose your insurance just because it leaves you exposed to unlimited out-of-pocket spending.

Americans who have been getting cancellation notices in recent weeks have complained bitterly that the President had broken this promise: “If you like the insurance you have, you can keep it.” (He has since explained that when he made this pledge, he was thinking about the 95 percent of insured Americans who have employer-based insurance, Medicare, and Medicaid – not the 5 percent who buy their own insurance in the individual market. Those are the policies that are most likely to fall short of the ACA’s requirements. )

By making the announcement, the President succeeded in completing an end run around House Republicans who have responded to public outrage by proposing new legislation that would allow insurance companies to continue selling new policies – indefinitely – that would not comply with the law’s new consumer standards.

“I will not accept” legislation that would “drag us back to a broken system,” Obama declared.

The President went on to say that he understood why consumers who received cancellation notices from insurers were upset. “It’s scary,” he said. But he also noted that the existing market for individual insurance was flawed. “If you received one of the letters, I encourage you to take a look at the exchange marketplace.”

Going a step further, President Obama then put the burden on insurers to alert their customers to holes in their insurance – and to call their attention to the exchanges, where they might well get better benefits and subsidies to help cover premiums and out-of-pocket expenses.

Carriers are free to offer their customers the option to remain on their current plans rather than switching to the new plans, the President stipulated, but if they do this they must follow two rules:

Under these conditions, “It is unclear how many insurers would opt to extend current plans,” the Los Angeles Times observed. “Industry officials have said that doing that would be burdensome.”

Not to mention embarrassing. Do carriers really want to send out letters to customers, explaining what they didn’t quite spell out when they sold them the insurance?

When customers know what their insurance does and doesn’t cover, will they want to renew?

Many Americans who have relatively inexpensive policies that don’t meet Obamacare’s definition of basic benefits and consumer protection are relatively young and healthy. They probably haven’t pored over the fine print in their policies.

They don’t know whether it caps out-of-pocket expenses – or whether there are limits on how much it will pay out over the course of a year. They may not know that while it covers hospitalization, it doesn’t pay for rehab after surgery. They may not be aware that it doesn’t cover chemo.

In fact, one of the most popular plans sold in New Jersey’s individual market doesn’t cover chemotherapy, prenatal care, or ambulance services, among other things.

What does it cover? Just $700 for physician’s visits for illnesses and injuries, a maximum of $500 for diagnostic tests and immunizations. Roughly 106,000 citizens of the Garden State (or 71 percent of those who purchase their own coverage in the individual market) are insured under these so-called “basic and essential” or B&E plans.

In the past, people covered by these plans probably didn’t worry about being diagnosed with cancer. If you asked them, “How much would your plan pay toward chemo?” they probably wouldn’t know that the answer is “zero.” But once the insurer points out that fact, a customer may well pause to consider … “What if? What if I’m in an accident and need to be taken to the hospital? How much does an ambulance cost, anyway?”

When customers investigate what exchanges offer, they may discover that, after applying their subsidy, they will pay less than they now pay for a B&E policy. Today, in New Jersey, a 25-year-old male with a B&E policy shells out $150 a month. Families in which the parents are in their early 40s fork over $1,100 a month – or more than $13,000 a year.

My guess is that President Obama’s announcement will cause many people to take a close look at the policies they thought they liked – and to check out exchanges. Today, he may have done more to boost enrollment figures in the exchanges than Michael Cera and Kal Penn ever could.